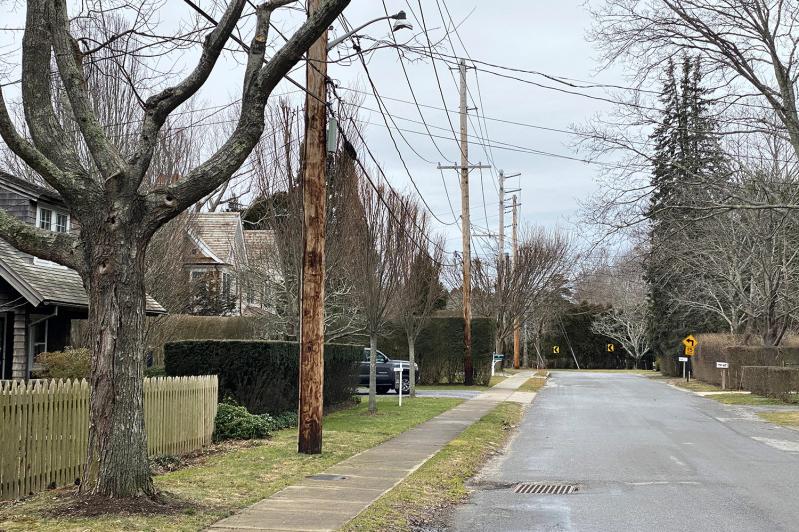 PSEG Long Island announced that a proposal to remove some of the transmission lines and lower the poles on McGuirk Street has been postponed.
Jamie Bufalino
By Jamie Bufalino

PSEG Long Island’s plan to install a supersize utility pole on Cooper Lane that would allow for fewer transmission lines and less obtrusive poles on nearby McGuirk Street has been put on hold. Construction had been scheduled to begin this month, provided the East Hampton Village Board approved it by Jan. 31.

At a public hearing held on Jan. 21, Vincent Frigeria, a district manager for PSEG, said the project was being done at the village’s request. It would entail the installation of an underground cable, he said, as well as a “riser pole” that would transition 2,650 feet of transmission lines underground. Burying the lines would allow the utility to remove two poles elsewhere, and reduce the height of about 23 others by five to seven feet.

The site chosen for the “riser pole” is in front of 51 Cooper Lane. That location was reviewed, inspected, and “supported by the village‚” Mr. Frigeria said.

At the hearing, several nearby residents objected to the riser pole. The most ardent critic was Dan Ujvari, who, with his wife, Yvonne, lives at 51 Cooper Lane. “This is going to utterly destroy our ability to enjoy our home,” he told the board.

The utility poles in the neighborhood have been an issue for residents since 2014, when PSEG, in an effort to upgrade power lines, replaced existing poles with ones that were 10 to 15 feet taller. A lawsuit brought that year by a citizens group seeking to have the poles removed and all the lines buried is ongoing.

The Ujvaris are seeking to join that lawsuit. They have also filed a separate suit against the village, East Hampton Town, PSEG, and its subsidiary, the Long Island Power Authority. In the latter suit, which seeks to prevent the installation of the riser pole, the couple contend, said their lawyer, Christopher Kelley, that East Hampton Village has “conspired” with PSEG and LIPA to modify the initial transmission lines project “in an attempt to quell the uproar from residents residing on McGuirk Street.” The suit also says an environmental assessment of the project has not been done, and the public has not been properly notified.

East Hampton Town is cited as a defendant because a PSEG engineer had recommended placing the riser pole in front of Cedar Lawn Cemetery, farther east on Cooper Lane. That section of the street is in the town, not the village. Rebecca Molinaro Hansen, the village administrator, said the town would not agree to have the pole on its land.

The suit describes the riser pole as “a monster pole [that] is 55 feet high and looks like a cross between an industrial installation and something from outer space.” Its installation, Mr. Kelley said, would drastically affect the value of the Ujvaris’ property and others’ on Cooper Lane, as well as their quality of life. The Ujvaris’ patio, kitchen, dining room, and living room would all face the new pole.

The hardship to the Ujvaris far outweighs the benefit from the pole, the lawyer said in the suit. Once it was installed, only the three highest transmission lines would be taken down. That would “offer only a very minor aesthetic improvement, if any, to the homeowners of McGuirk Street.”

Elizabeth Flagler, a spokeswoman for PSEG, said the plans to install the pole would not be revisited “until all parties agree on and support a new, mutually acceptable, riser pole design and location.”

Before construction could start, the village board would have to give PSEG permission to open up the streets. Village Mayor Richard Lawler said he could not discuss the litigation, “but I sincerely hope we can use this time to work toward a solution that is agreeable to all parties.”