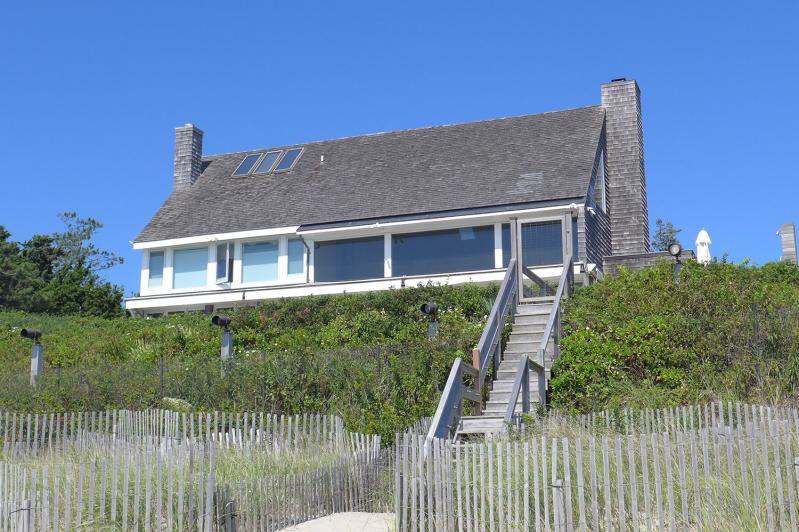 The owners of this house off Lily Pond Lane said they were willing to go to court to be able to tear it down and build a new one — and now they have.
Jamie Bufalino
By Jamie Bufalino

The owners of an oceanfront property in a coastal erosion hazard area, who were denied permission and variances by the East Hampton Village Zoning Board of Appeals to raze their house and construct a larger one, have asked the New York State Supreme Court to overturn the board’s determination.

In a petition filed on Jan. 9, Norman and Helene Stark, the owners of 33 Lily Pond Lane, said the board’s decision, rendered on Dec. 13, had been “arbitrary and capricious,” and asked the court to direct the Z.B.A. to approve the variances necessary for construction.

At their first hearing, in January 2019, the Starks proposed building a 7,567-square-foot house and pool, within the hazard area but landward of the existing house. That plan would have allowed them to maintain ocean views from both floors of the new house.

At the urging of the board and its environmental consultants, the couple scaled back the project. The new house was proposed farther landward, with its footprint in the hazard area the same as that of the existing house. The pool would be sited entirely out of the erosion zone. In that scenario, the Starks would have had an ocean view only from the second floor.

According to the village zoning code, the criteria for obtaining variances for construction in the hazard area include demonstrating that the strict application of the code would cause practical difficulty or unnecessary hardship, that no reasonable, prudent alternative site exists, and that the variances requested are the minimum necessary.

In its determination, the zoning board said the Starks had failed to fulfill any of those criteria. “This is a large lot where only 40 percent of the property is within the [hazard area],” it said, therefore the applicant has the room to move the new residence out of that zone. The desire to maintain ocean views, the board said, does not rise to the level of “practical difficulty” required under the code.

The determination also noted that “the applicants’ requests are not the minimum necessary.” The Starks could, alternatively, add on to the existing house, it said, or build a new house outside the erosion zone.

The Starks dispute those assertions. Due to existing structures on the north end of their 1.76-acre property — a tennis court and tennis house, which are outside the erosion zone — as well as the deeply sloped topography of the land, the relocation of the swimming pool, and the proposed installation of an advanced septic system, “it was not reasonable or prudent to locate the proposed new house any further north,” their petition says.

“We had moved the house as far back as we could,” Linda Margolin, a lawyer for the applicants and the author of the petition, said on Friday. Therefore, she said, the variances sought were indeed the minimum necessary. “You can’t make it a condition to get rid of legally pre-existing structures. That is beyond the scope of what a zoning board is allowed to do,” she said.

The Starks’ petition cites several previous Z.B.A. approvals for construction in the hazard area. In 2006, it notes, the board granted a variance to Mort Zuckerman, the media executive, to build staff quarters, including a sitting room,  bedroom, and bath on the first floor, and two guest bedrooms and baths on the second floor, all within the coastal erosion hazard area. Mr. Zuckerman’s residence is next door to the Starks’.

Ms. Margolin and Leonard Ackerman, who also represents the Starks, had previously cited that determination and others to the board. Lys Marigold, its chairwoman, commented at one point that “no matter how many times the so-called precedent cases have been regurgitated over and over to us, none of them seem relevant.”

The board has in the past permitted renovations and additions in the hazard area, she said, but only once has it allowed for new construction. That was in 2015, after fire destroyed the West End Road residence of Peter Morton, the co-founder of the Hard Rock Cafe restaurant chain. In that instance, the board found that the property, unlike the Starks’, was not large enough to accommodate a house outside the hazard area.

Ms. Margolin maintains that the Z.B.A. is erroneously drawing a distinction between house additions and new construction.

“The board thinks the law has a preference for existing structures as opposed to new ones, but it doesn’t,” she said. “The level of scrutiny for additions and new construction is the same. Anything you want to do in a coastal erosion hazard area zone is a practical difficulty.”

“They think their job is to deny as many variances as possible,” she added, citing a remark from Ms. Marigold during a hearing: “She said, in the village there is a feeling that we don’t want teardowns and new construction of bigger houses.”

“They’re trying to be the guardian of the village in a way that is not expressed in the zoning law,” said Ms. Margolin. “There are serious legal questions here, not just issues of the board’s discretion. We don’t apply legislation based on a feeling. They have to apply the law.”

Joel Markowitz, the lawyer representing the Z.B.A. in the matter, said it would be “imprudent” to comment on the Starks’ petition, and that the board had clearly made its case in its “detailed determination.”