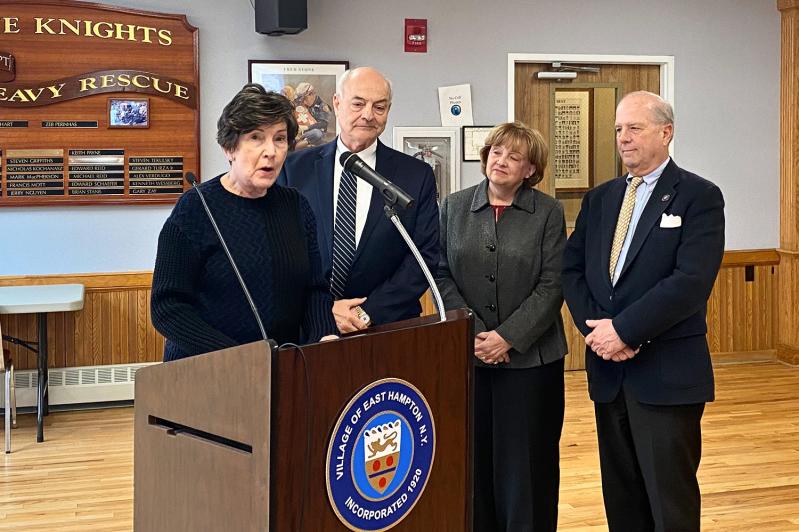 If other members of the East Hampton Village Board agree, retail food stores in the business district could be allowed to provide seating for up to 16 customers, Mayor Richard Lawler announced at a board meeting on Friday.

According to village code, stores like Mary’s Marvelous, the Juice Press, and the East Hampton Market are not permitted to have tables, chairs, or counters for on-premises consumption. Mr. Lawler said amending the code would draw in customers and be good for business. The village’s planning and zoning committee will begin to examine other code restrictions on businesses, he said. “I encourage business owners to contact us with their concerns.”

Mr. Lawler, who was appointed mayor on Jan. 1, the day after Paul F. Rickenbach Jr. resigned, made the announcement while reading a prepared statement that provided an update on his tenure.

“Since January first . . . I and my board colleagues have been in discussions with many residents and interested groups regarding how we may govern moving forward,” he said. “We have had, and will continue to have, an open-door policy.” He announced that the village would soon be instituting regular “coffee with the mayor” get-togethers at Village Hall.

Deputy Mayor Barbara Borsack, who is running for mayor in June’s election against Jerry Larsen, had suggested the kaffeeklatsch idea at a Feb. 6 board meeting. She had also recommended the village launch a more user-friendly Facebook page.

Later on Friday, the board resolved to do just that. The new Facebook page, due in the coming weeks, will include information on public hearings and board meetings, emergency notifications, and village projects and events. Residents will be able to make comments and ask questions on the page, Ms. Borsack said.     Mary Busch, a board member of the Village Preservation Society, presented the village with a $10,000 donation for the Dominy Shops Restoration Project. The money will be used to recreate an oak workbench that will be on display in the clock shop.

The board approved a request for bids for a mobile parking enforcement system, which will allow police to enforce parking regulations without the use of either ticket dispensers or chalking. Members also okayed the purchase of a new hybrid Ford Interceptor Utility police car, and equipment for a new ambulance, including a power loader for stretchers, a heart monitor and defibrillator, and a radio system.