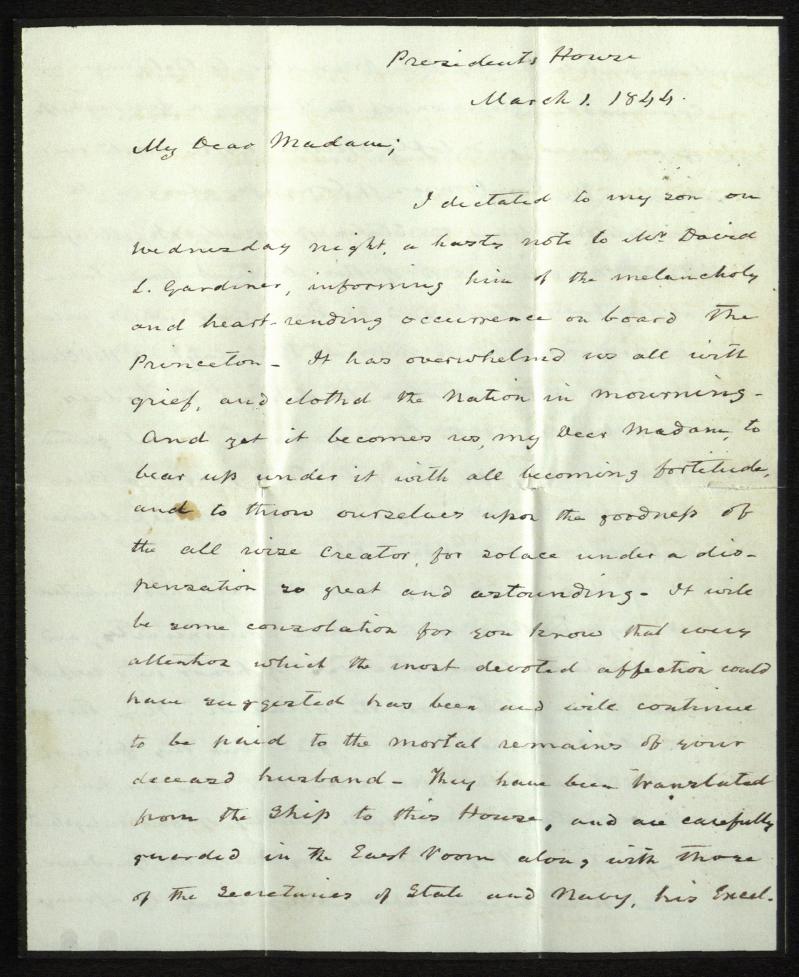 Critics called President John Tyler (1790-1862) “His Accidency,” but to be fair, many of Tyler’s greatest life accomplishments came out of tragic accidents.

The nickname originally reflected the unfortunate series of events that made Tyler the first vice president to become president when his war hero running mate, William Henry Harrison, died barely 30 days after his inauguration in 1841.

Three years later, another tragic accident helped persuade the much younger East Hampton-born Julia Gardiner (1820-1889) to agree to marry the widowed president she’d refused to marry for over a year.

That accident was the explosion of a gun aboard the U.S.S. Princeton, a naval steam frigate, on Feb. 28, 1844. The Princeton was on a celebratory cruise of the Potomac River, carrying 400 guests, including David Gardiner (1784-1844), the Gardiner’s Island owner and a former New York State senator, and his daughters, Julia and Margaret. When the ship’s gun exploded, several people were killed, including members of Tyler’s cabinet and David Gardiner himself.

In the letter seen here, dated March 1, 1844, President Tyler writes to Gardiner’s widow, Juliana McLachlan Gardiner (addressed as Julia), expressing his sympathies for the loss of her husband. He tells Mrs. Gardiner that her husband’s remains were transported to the White House following the accident, where they were being given “every attention which the most devoted affection paid.”

Tyler shares plans to inter Gardiner’s remains with the other explosion victims in a vault at the congressional burial ground. As he relays details to “assuage the grief you must necessarily feel,” he notes that “your dear daughters are under this roof,” hinting at how his comforting presence as Julia Gardiner mourned the death of her father convinced a woman 30 years Tyler’s junior to reconsider his previous marriage proposals.

And 117 days later, on June 26, 1844, President John Tyler married Julia Gardiner, making the best of another accident. The couple had seven children and were together for 18 years before Tyler’s death.