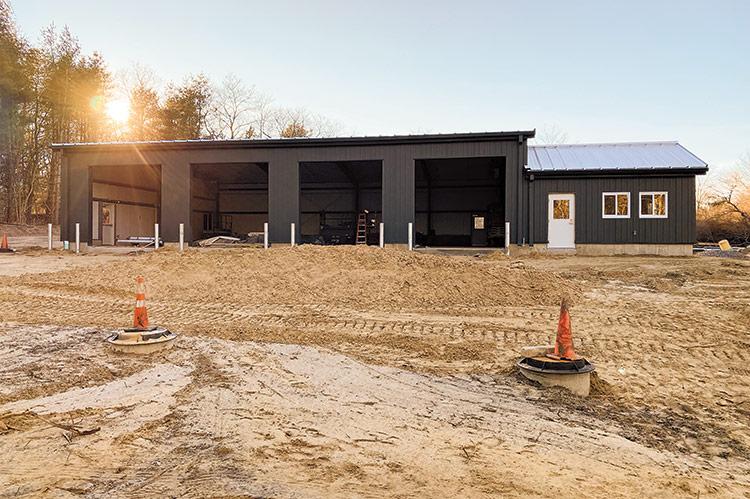 Neighbors of an East Hampton Fire Department substation under construction near Bull Path are not happy about a proposal to build a tower there for emergency communications equipment as well as panel antennas and remote radio heads that could boost cellphone service in the area.
Jamie Bufalino
By Jamie Bufalino

Residents of Northwest Woods vociferously objected to an AT&T plan to build a 185-foot-tall cell tower in their neighborhood at an East Hampton Town Planning Board public hearing on Feb. 5.

The proposed tower would be built on town-owned land adjacent to an East Hampton Fire Department substation, which is under construction. AT&T’s equipment, including 12 panel antennas and 15 remote radio heads, would be installed on the tower between 155 to 160 feet high, and the space above would hold the town’s emergency communications equipment.

The tower would sit on a 264-square-foot concrete slab within a 2,500-square-foot fenced area between Bull Path and Old Northwest Road. According to Eric Schantz, a senior planner, it would be well concealed in a wooded area “deep within the interior of the site,” but the upper portion of it would be 125 feet above the tree line.

Kimberly Nason, a lawyer for AT&T, noted that the proposed site, a former brush dump, is the town’s preferred location.

AT&T had sued the town in 2017 after the planning board denied its application to install antenna panels on an existing wind turbine at Iacono Farm on Long Lane. The suit was settled; the settlement called for an expedited review process from the planning, zoning, and architectural review boards.

On Feb. 4, the zoning board granted variances to allow additional height for the town’s emergency communications system. Variances were necessary because the tower would not meet the “fall zone” setback from two nearby residences and the fire substation. Town code says that “no habitable building or outdoor space where people congregate” can be within two times the height of a cell tower.

Andrew Campanelli, a lawyer representing four residents of Bull Path, told planning board members they would be violating town code if they approved the application. “It’s impossible for you to conclude that [the tower] would not have adverse impacts or be compatible with the adjacent homes,” he said. “It’s going to dominate the skyline and destroy the views of every home around it.” He provided the board with several letters from real estate brokers who confirmed that property values in the neighborhood would plummet if the tower is built.

David Kirst, a lawyer for Jennifer Gardner, the owner of one of the two houses within the fall zone setback, said the application did not meet several of the town’s standards for siting a cell tower, including one that says “placement within trees should be encouraged, but no antennas should extend higher than 10 feet above the average tree height.”

David Brown, another Bull Path resident, said he has increasingly felt disadvantaged simply because he lives north of Montauk Highway. “You’re making a statement that we are second-class citizens by putting a huge horrible tower in my neighborhood where I live with my children,” he said. “You should not put it in anyone’s backyard, you should put it in a commercial location.”

Pamela Leichter said that Bull Path is a densely populated street and Long Lane is not; therefore Iacono Farm would be a far better site. Thomas Cooper, a Long Lane resident, disagreed. Long Lane is a scenic vista, he said, and if the tower were at Iacono’s, “it would be about 300 feet from our school property. I think we all know that that would not make our community happy.” Plus, he said, the farm’s existing tower would not be able to accommodate the town’s emergency communications equipment. Eddie Schnell, a communications technician with the East Hampton Town Police Department, confirmed that the turbine would be too short.

Chip Dayton also said he was strongly in favor of AT&T’s proposal. “I know the community desperately needs [cell] service immediately,” he said. “I’m an Uber driver, and last summer my signal was dropping out every five minutes. I barely made any money the whole summer.” A former town dump, he said, “is the perfect place for the cellphone tower.”