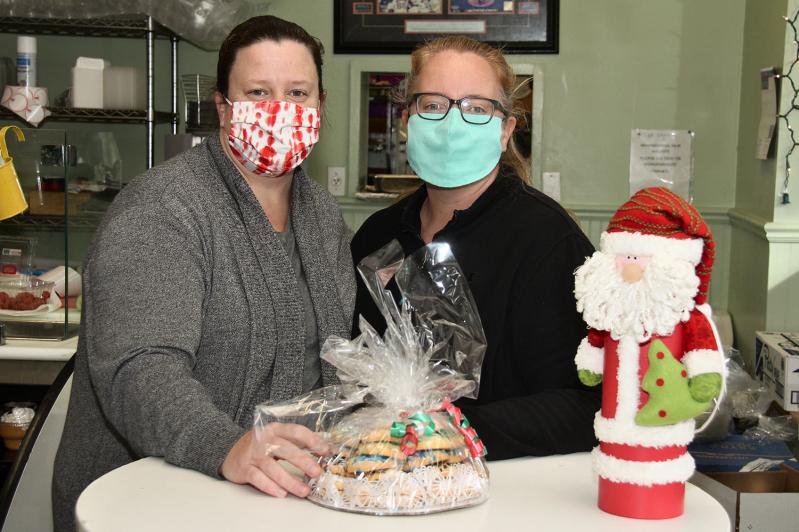 Like many food stores, One Stop Market had to quickly change how it operated to meet customers' needs and keep them and the staff safe, said Erin Field, left, and Lauren Harrington, whose father owns the store.
Durell Godfrey
By Jack Graves

In mid-March, as stay-at-home orders went into effect, panicked buying was leading to shortages, and customers were nervous about going into grocery stores, many food stores pivoted to meet the new demands.

Though worried, Lauren Harrington and Erin Field, whose father, Bill Hall, owns One Stop Market on Springs-Fireplace Road, quickly adjusted their operating procedures. Initially, there was curbside service only, overseen by Kristy Schopper, "our smile," Ms. Field said during a recent interview. Orders were phoned in, and, if shoppers were skittish about standing on line outside, Ms. Harrington would tuck bagged groceries into the opened trunks of backed-in vehicles. "We made home deliveries too," said Ms. Harrington.

One Stop's volume of business has been steady during the past nine months, "thanks to the loyalty of our customers," said Ms. Field.

"There haven't been any problems with following the protocols, with mask wearing, social distancing, and sanitizing," Ms. Harrington added.

And, the sisters said, when it came to their staff of 16, there had been no layoffs during this trying period.

Each of them has children -- Ms. Field, a 10-year-old daughter, Rylie, and Ms. Harrington, an 8-year-old son, Hunter, fifth and third-grade students at the John M. Marshall Elementary School, though they've been learning remotely in the company of babysitters during the pandemic.

"We did what we had to do, the right thing," said Ms. Harrington when asked if the two of them had been wary of the possible consequences essential workers faced.

"And -- so far anyway," said Ms. Field, finding some window molding to knock on, "we've been very lucky."