A tug-of-war between the college and Southampton Village 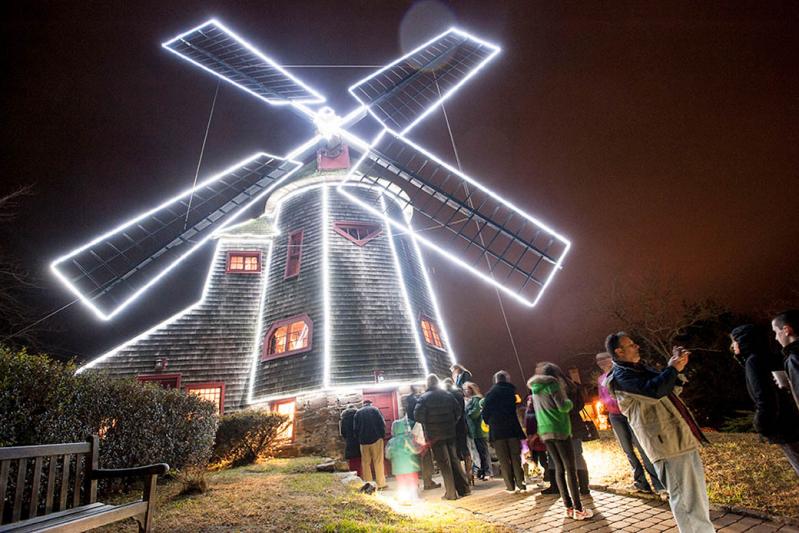 A holiday lighting at the 1713 windmill on the Stony Brook Southampton campus. Southampton Village has asked the state for permission to move the windmill back to its original home on Windmill Lane.
Via Stony Brook University
By Gabrielle Topping

Windmills symbolize history and have great significance on the South Fork. One of them, built in 1713 in Southampton Village, is known as one of the oldest in the United States. It remained in its original location on Windmill Lane until 1890, when the Hoyt family moved it five miles away to Shinnecock Hills.

The property where the windmill has stood for 130 years went from residence to the home of Southampton College in 1963 to the campus of Stony Brook Southampton in 2006. Now its location is subject to debate, as the village has appealed to Gov. Andrew M. Cuomo requesting permission to move it from the State University of New York-owned campus back to Windmill Lane.

"The windmill represents the unique history of Southampton Village, and it's a cherished and important part of our story," Mayor Jesse Warren said. "We hope to return the windmill to Windmill Lane, a street whose name was inspired by the windmill itself."

The windmill and its adjacent water-view quad have been in continuous use over the years, she said, hosting orientations, fund-raising dinners, and other events. Traditions associated with it include a lighting on the first Friday of December, a holiday celebration started by Tim Bishop, the former congressman who was provost of Southampton College for many years.

It also became a notable literary venue, Ms. Sheprow added, as the site of workshops, readings, and receptions during the summertime Southampton Writers Conference, and it was designated a literary landmark by the American Library Association to honor Tennessee Williams's 1957 residency in it when he wrote the play "The Day on Which a Man Dies."

But if the windmill is beloved, Porter Bibb, a member of Southampton's windmill committee, said he believes that moving it back to the village will allow even more people to enjoy it.

"As a longtime Southampton resident and historian, I have been fortunate to learn about windmills and their history on Long Island," he said. "The vast majority of windmills were built and operated for nearly 200 years, and I have always been disappointed that Southampton is the only village on the East End without a windmill."

He added that "calling the windmill the Stony Brook Southampton Historic Windmill would instantly raise Stony Brook's profile and importance in the community, relieve Stony Brook of the financial burden of repairing, restoring, and maintaining the windmill, and relocating the windmill back to the village, where it can be seen and visited by hundreds of community residents and tourists, will also provide Stony Brook a significant and appealing site for fund-raising and events."

And yet "Stony Brook University cherishes this windmill that has been sitting on our property" for well over a hundred years, Ms. Sheprow said. "We appreciate Mr. Bibb's interest, and hope his committee takes this energy to help us fix the windmill and maintain it as an incredible landmark on its current site."

Should it be moved to Windmill Lane, Mr. Bibb said, it would be managed and operated by the Southampton History Museum, which plans to have a store inside it, offering books, photos, and other historical materials having to do with the structure's 307-year history.

"Every day I walk into our lovely Village Hall and I am surrounded by historic art featuring the windmill," Mr. Warren said. "As a former board member of the Southampton History Museum and an adviser of the museum, I value the importance of history and traditions."

Whether the windmill remains where it is or is returned to the village, the mayor, Ms. Sheprow, and Mr. Bibb all agree they want to see it restored.