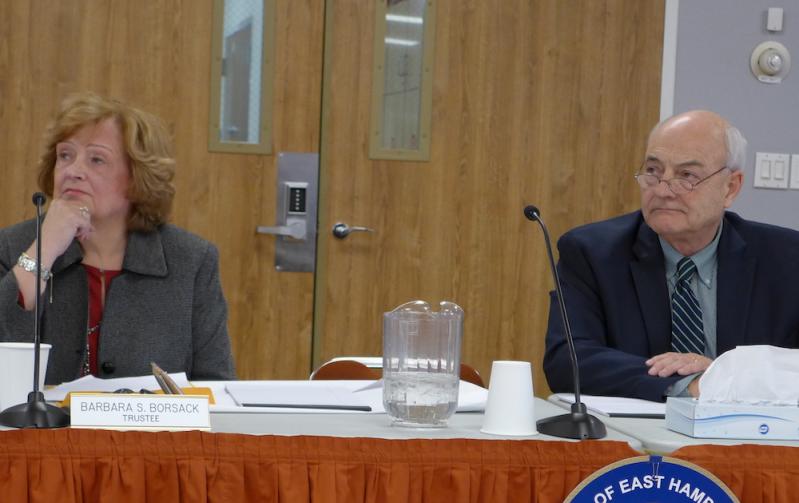 The East Hampton Village Board is set to appoint Richard Lawler as mayor and Barbara Borsack as deputy mayor at its meeting on Friday.

Resolutions to that effect are on a meeting agenda distributed Tuesday, but have yet to be voted on. Mr. Lawler, who is now the deputy mayor, would fill the seat of Paul F. Rickenbach Jr., who resigned at the end of 2019 after 27 years in the post.

Ms. Borsack, who was first elected to the board in 2000, had served as deputy mayor for the first 16 years of her tenure before being replaced in 2016 by Bruce Siska. She is running for mayor this year on the Elms Party line with Mr. Lawler and Raymond Harden, a co-owner of the Ben Krupinski Builder company, as running mates. Challenging her is Jerry Larsen, a former East Hampton Village police chief, who is running with Sandra Melendez, an attorney, on the New Town Party line.

At a village board meeting on Jan. 2, Mr. Larsen strongly urged the board not to name Ms. Borsack to the mayor's post, arguing that Mr. Lawler's appointment "would keep the playing field level" as the June election approaches.

The village board will still need to decide what to do about the vacancy left by Mr. Rickenbach's resignation. They could appoint a board member or leave the post empty until the election in June. A resolution on that appointment was not on the agenda for this Friday's meeting.