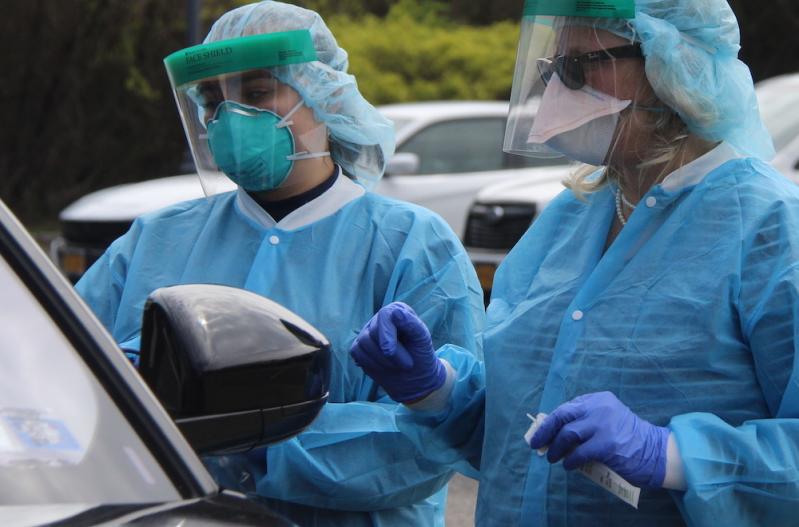 A drive-through testing site opened in East Hampton earlier this year. Suffolk County is partnering with Stony Brook Southampton Hospital to set up a testing site in Hampton Bays on Friday.
Durell Godfrey
By Jamie Bufalino

With coronavirus infection rates far higher in Hampton Bays and Riverhead than in other parts of Suffolk County, the county is increasing the number of testing sites in those communities to understand why, Suffolk County Executive Steve Bellone said on Thursday.

Over the last five days, Suffolk County has averaged a 3.5 infection rate, while in Hampton Bays the percentage has been 6.5 percent, and in Riverhead 5.6 percent. On Thursday, the county set up a testing site that provides rapid results at the Hampton Bays Middle School, where it plans to test 400 people including students, teachers, and staff. A similar site will be set up in the Riverhead School District tomorrow, Mr. Bellone said.

The county is also partnering with Stony Brook Southampton Hospital to set up a community testing site tomorrow in Red Creek Park in Hampton Bays. The site is scheduled to operate for two weeks, but may continue if needed, he said. The county and Sun River Health will become partners in running a new site in Riverhead.

Contact tracing efforts have not identified specific clusters of cases in either community, Mr. Bellone said, and the elevated rates may indicate an actual rise in infections, a statistical anomaly, or a combination of both. "We're not going to wait to find out. We're going to be proactive," he said.

Mr. Bellone emphasized that the current surge in the county is not isolated to those communities and that the virus is not being spread in schools. "However, if these numbers continue to surge upward and kids and staff are getting impacted outside the school, it will inevitably have an impact inside the school," he said.