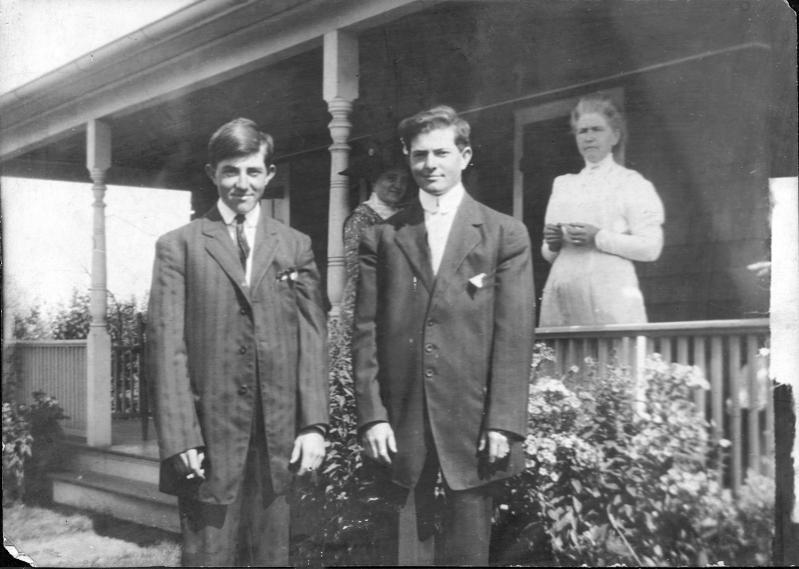 With Mother’s Day approaching, this image of Ellen (Nellie) Gay McGuirk (1861-1929), seen standing on the porch of her boarding house behind her sons, speaks to the spirit of the holiday.Nellie was born on Nov. 6, 1861, to James E. Gay and Mary Corrigan Gay in the original Rowdy Hall. In 1889, she married Thomas McGuirk (1861-1906) of Bridgehampton, and they had three children — James Thomas (1891-1954), John Leo (1893-1958), and Mary Elizabeth (1898-1975). After residing on Egypt Lane with Nellie’s father and brother, the McGuirks hired Frank and James Grimshaw in 1905 to build a “cottage” on Newtown Lane, which is where the photograph seen here was taken. Thomas McGuirk died in 1906 after experiencing an “abscess on the brain,” which may have resulted from a horse’s kick to the head. The week before he died, however, he transferred 12 acres on Newtown Lane, next to Charles H. Mott’s property, to Nellie. An obituary a week later reflected on his outstanding work ethic and skill as a property manager, foreman, and farmhand.Now a widow, Nellie turned her home into a boarding house to support her family. She benefited from the house’s proximity to the train station and school, and by late 1908 had several female schoolteachers boarding with her. The boarding house was successful enough to hire a cook.As young men, Nellie’s boys found work in the building trades. Her eldest son, James Thomas, worked for Nellie’s relatives at E.M. Gay as a carpenter, while John Leo worked for S.C. Grimshaw as a plumber, before serving in World War I. The McGuirk boys brought up their own families in East Hampton. Their sister, Mary Elizabeth McGuirk, worked as a teacher and later a guidance counselor in both Orange and East Orange, N.J., returning to East Hampton for summer vacations and holidays.Andrea Meyer is a librarian and archivist in the East Hampton Library’s Long Island Collection.