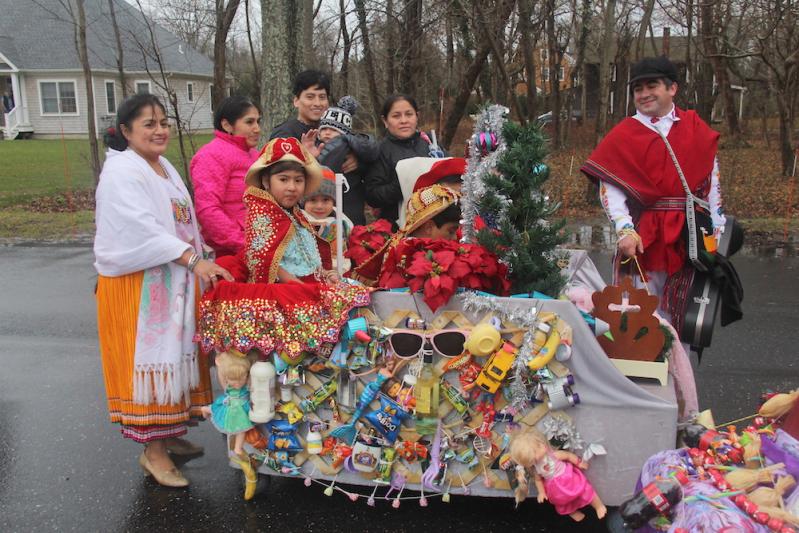 They gathered shortly after noon Sunday at their meeting place at the Chase Bank on Main Street in East Hampton, and for the next 45 minutes as they made their way to Most Holy Trinity Catholic Church, neither the rain nor sleet nor gray skies dampened their enthusiasm. They were drenched or holding umbrellas and still marched — the costumed children with pencil mustaches or flowers in their hair, the Mary and Joseph lookalikes carrying a statue of the infant Jesus, the teenage boys dressed as shepherds, the women in their colorful swaying skirts, and the men towing five-foot-high faux horses on wheels that were brightly decorated with ribbons and sweets.

And an 11-piece brass band serenaded them the whole way.

For the 15th straight year, the local Ecuadorean-American community and Comunidad de Base brought a slice of Ecuador to the Village of East Hampton with their annual Pase del Niño Viajero de San Joaquin celebration, a spirited recreation of the largest Christmas pageant in Ecuador, and a chance for the local Ecuadorean community to enjoy a sentimental journey back to their birthplace — if only for a day.

“I look forward to this every Christmas — oh, always,” said Veronica Uyaguari, one of the folk dancers in the festivities that took place in the Most Holy Trinity parish hall after a Spanish-language Mass. “This is a tradition from my part of the country. It is so nice to be able to have it here.”

The daylong celebration, which organizers say typically draws 400 to 600 people to the church, is a recreation of a religious festival that began in the early 1960s in the historical city of Cuenca, the capital of the Azuay province in Ecuador. An antique carved statue of the Christ child was taken first to Bethlehem, and then on to Rome by a local monsignor, where it was blessed by Pope John XXIII. As the story goes, when the statue returned to Cuenca, someone in the cheering crowd called out, “Ya llegó el Viajero!” — “The traveler has arrived!”

And that’s how the original statue, which dates to 1823, became known as the Niño Viajero, the Child Traveler.

Today, the meaning of the celebration is twofold. There’s the religious aspect, which is meant to celebrate the birth of the Christ child and illustrate the journey of Joseph and Mary, led by an angel carrying a guiding star. But the entire day is also a celebration of Ecuadorean culture. After the parade here, the event continued at the church hall with music, food, gifts for the children, a series of folk dances by people in traditional costumes, as well as a blessing of the community by Father Cesar Lara, a traveling priest who said he serves seven Spanish-speaking congregations on the East End.

“But this is the only [local] church that holds this celebration,” Father Lara said.

Ramiro Pillco of East Hampton, who shared master of ceremony honors during the parish hall celebration, said one of the hopes is that the event will help younger members of the EcuadoreanAmerican community understand traditions they never got to experience themselves in their parents’ birthplaces.

“Our hope,” Mr. Pillco said, “is they will learn these traditions, and carry them on even after us.”

Mr. Pillco said he sometimes thinks it would be nice to include the Niño Viajero procession in East Hampton’s Chamber of Commerce parade that briefly shuts down the streets of town each December, so more of the East End community could become acquainted with their Ecuadorean customs as well. As it is, the Niño Viajero parade here is always led by two people carrying an American flag first, and then the flag of Ecuador, to signal the attendees’ dual cultural homes.

“We would like more people to see where we are from and what we do,” Mr. Pillco said. “It’s so beautiful, right?”

Vinicio Gutama was among the performers in Fuerza en Esperanza, an East Hampton troupe that performed a lively dance Sunday that featured men in caballero costumes (complete with sheepskin chaps) and women in brightly colored peasant skirts and straw hats. Mr. Gutama said he considers it a high honor, not just an exercise in nostalgia, to dance at these kinds of cultural events throughout the New York area.

“In addition to the birth of Jesus, one of the other things we celebrate in our country with this event is the harvest,” Mr. Gutama said. “We are giving thanks for all the blessings we receive during the year.”

As both Mr. Pillco and Ms. Uyaguari stressed, the many meanings of the day are deeply felt. That was obvious by the happy mood in the hall, and the sight of so many folks recording the celebration on their smartphones as the music played into the early evening, and the dancing rarely stopped.