Now’s a good time for a great-horned owl prowl 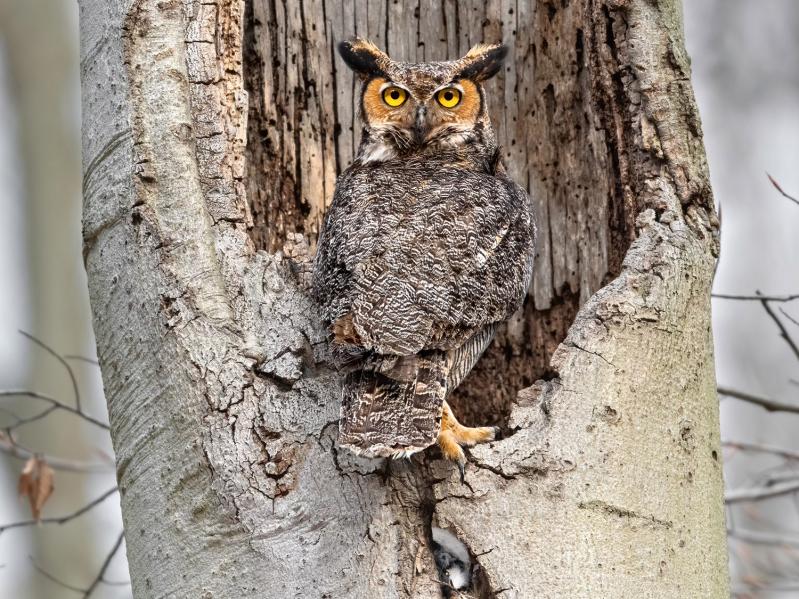 Great-horned owl nestlings, like the one seen here in the crack of the tree, appear between March and June. Rather than building their own, the owls co-opt nests from a wide variety of other birds.
Isaac Grant
By Christopher Gangemi

During this Christmas/New Year’s interlude, I offer a fun challenge: Take a walk in the woods at night.

Try it. You may hear a great-horned owl, who, despite the cold, is starting its courtship ritual. Its classic hooting call — offered in the cadence of “Who is awake? Me too!” — can be heard for miles, the song of the blue winter night.

Admittedly, whenever I go owling, I feel like I’m breaking the law.

I remember the first time. I was in the Accabonac section on the Montauk Christmas Bird Count in 2006, a newbie among seasoned, hardened birders. In a residential neighborhood, we stopped the car to call for owls and a grown man hooted into someone’s backyard while the rest of us strained our ears, listening for a response.

“Where are the cops in this town?” I wondered.

“The great-horned owl is one of our earliest, if not the earliest, species to breed in the state,” wrote John Bull in his essential book, “Birds of New York State.” They’re adaptable, which is why the poet George Held of Sag Harbor wrote that they are the “least likely owl to / grow extinct in a world grinding up / habitat at a fierce rate.”

Bull reported that “nests have been found in the densest and remotest wooded swamps and, at the other extreme, in relatively small, wooded tracts on the outskirts of large cities or even in such terrain within the cities themselves.”

One place they won’t likely nest? “I suspect they wouldn’t choose to nest in an up-lit tree,” said Kevin McGowan, a senior course developer at the Cornell Lab of Ornithology. He explained that owls don’t build their own nests. Instead, “They use hollow trees or a broken-off stump where a hollow is left behind. They also steal crow or raptor nests.” They prefer deciduous trees, especially beech.

Eggs appear in those nests sometimes by the end of January and turn to nestlings by early March. “Nothing eats an adult great horned owl,” said Dr. McGowan, but raccoons enjoy their eggs.

If the eggs make it, they grow into our largest owl, widely recognized by both voice and sight, although with their camouflage, they blend into trees and are rarely seen during the day.

Owls don’t migrate, although Dr. McGowan suggested that juvenile birds will move around. An established pair can live for decades. The oldest banded great horned owl was 28 years old, according to allaboutbirds.org.

They have a wide, mammal-centric, menu. “They have big powerful feet and prefer rabbit-sized prey,” said Dr. McGowan.

Great-horned owls were once seen as a nuisance by farmers who let their chickens roam free at night. “Once the bird has acquired a preference for a diet of domesticated fowls and has learned that they are easier to capture than are the wild creatures, nothing short of death is at all likely to deter him,” wrote George Gladden, in “Birds of America,” who cited one instance of a farmer losing 59 Guinea hens in a single autumn to the same owl.

But unless you have dozens of domesticated birds, the great-horned owl is your great friend because it eats rats, friends to no one.

“She prefers mice over rats,” Jane Gill, a real estate agent and volunteer for the Quogue Wildlife Refuge, said of Meep, a 12-year old great-horned owl that has been raised by the refuge since it was only a couple of days old.

“She fell from her nest and broke both wings and her pelvis. It took a year for her to be rehabilitated,” she said.

In 2017, it was Ms. Gill’s turn to be rehabilitated. She was diagnosed with cervical cancer and given two years to live.

“I went and spent a lot of time with her. I’d take her for walks on my falconer glove, and I felt she was a part of my healing. It was an epiphany for me that when I was with her, she wasn’t thinking about what she had for breakfast. She was totally in the moment. Even though I had tried to live my life that way, being with her centered me. I loved going into the woods with her. It reduced the fear I had for what was happening to me.”

There’s a full moon on Jan. 6, so the night skies should be bright this week. Leave your phone home and let the waxing moon be your flashlight. Take that walk. It’s different, but relax, and let your eyes adjust.

If you trip and fall on your face, that’s on you.

Walk until you sense you’re more surrounded by trees than by houses and cars. Notice how loud your steps are and the sound your arms make as they brush against the sides of your winter jacket. When you find a place to stand or sit, be quiet. When you feel like you’ve been quiet long enough, where your brain starts talking to you, just keep being quiet.

Under the trees, and the Joycean “heaventree of stars,” maybe you’ll hear an owl calling.

And if you don’t hear one, rest assured one probably hears you, and is watching.