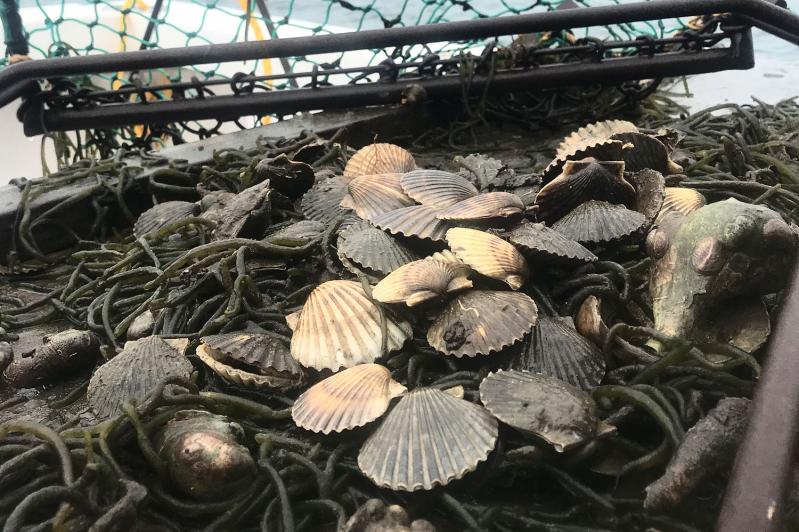 The bay scallop fishery in the Peconic Bay estuary system was declared a disaster by the Department of Commerce, but marine biologists are seeing an extensive crop of new scallops in the system this summer.
Jon M. Diat
By Jon M. Diat

Ask any bayman, and all would agree that the bay scallop fishery in the Peconic Bay estuary system in the past two years was a total calamity. As such, it was no surprise to learn that the United States Department of Commerce recently declared the events of 2019-20 a fishery disaster.

"Fisheries are essential to our communities and economy, and we want to ensure America is in a position to remain competitive on the global stage," U.S. Secretary of Commerce Gina Raimondo said in a statement. "These determinations allow us to lend a helping hand to the fishing families and communities that have experienced very real and difficult setbacks in the last few years."

But there is also some good news, for now, regarding the popular bivalve. While it's still early, there have been no signs of a die-off this summer among scallops that were spawned last year, according to Stephen Tettelbach, a Long Island University ecology professor who heads Cornell Cooperative Extension's Peconic Bay Scallop Restoration Program. Dr. Tettelbach's team conducts periodic dives of the bottomland in several locations during the year to check on the status of the growing scallops.

Dr. Tettelbach was equally enthused about the number of larval scallops in local waters. "We did the first sampling of our larval spat collectors last Monday and saw the largest scallop set in the last 17 years," he said. "There are small bugs all over the bays." Small or newly-hatched scallops are commonly called "bugs."

Bay scallops, which can lay up to two million eggs when they spawn in June, have a life span of around 18 months. This year's larval scallops would be ready for harvest by next November, when the bay scallop season opens for five months.

"It's great to hear the news on the scallops so far," said Barley Dunne, the aquaculture director for the Town of East Hampton. "But I'm not overly optimistic. There is still a lot of summer left, but I'm staying hopeful."

Cornell Cooperative Extension, in collaboration with scientists from Stony Brook University and Long Island University, continue to investigate the causes of the die-offs. Initial reports indicate that the die-offs resulted from a combination of factors, including high water temperatures, low dissolved oxygen levels, and a newly discovered bay scallop parasite, in conjunction with the physiological stress of spawning.

The appearance of cownose rays, a species with very few natural predators, may also be a contributing factor. The rays, which can weigh up to 50 pounds and which travel en masse, have a voracious appetite for oysters, crabs, hard and soft clams, bay scallops, and other invertebrates.

"The rays have an enormous appetite. We've only seen them the past few summers, but they travel in large groups and can be very destructive," Mr. Dunne said. Some commercial baymen commented that they have seen the first signs of the return of the invasive rays in their pound nets in recent days.

On a positive note, at the town's hatchery on Fort Pond Bay in Montauk, "We've had some amazing success in raising scallops the past few years," Mr. Dunne said. This spring, he estimated that about 300,000 young scallops were returned to the wild, primarily in Three Mile Harbor and Napeague Harbor. "Those two harbors in particular are well-suited for seeing the best success of a scallop reaching maturity."

Prior to the mid-1980s, catches of bay scallops supported a commercial fishery with a dockside value of up to $2 million per year. Including economic multipliers, the fishery annually contributed more than $10 million to the local economy. At that time, there were upward of 600 full-time baymen, many of whom relied on the popular bivalves as their primary source of income.

The bad news for scallops began in 1985, as series of brown tide algal blooms decimated bay scallop populations and pushed them to the brink of extinction. With the disappearance of the scallop fishery, most baymen either left the water to find other jobs, retired, or moved out of state. Bay scallop restoration efforts commenced in 1986, with periodic success over the following 30 years.

However, in 2019, a massive die-off of adult bay scallops occurred throughout the Peconic Bays, with declines in population sizes and commercial fishery landings of over 95 percent. Sadly, in 2020, another mass die-off occurred, with a mortality rate of over 98 percent of adult scallops occurring between May and October. On a positive note, these mortality events have not affected juvenile scallops to a large degree.

"So far, the signs look promising," said Danny Lester, a full-time commercial bayman in Amagansett. "At this time last year, we were already seeing the die-off of adult scallops, but that's not the case so far."

Mr. Lester, whose family has fished East End waters for many generations, says that bay scallops are also naturally very cyclical. "My grandfather started fishing for scallops in 1900, and he told us that there were many years where they just disappeared, and the next year they'd be back big time. The catches were not always consistent, even back 100 years ago when the waters were cleaner."

There are more than three months before the start of scallop season. A lot can still happen. "We still have to go through August and the waters will warm up even more," said Mr. Lester. "I'm keeping my fingers crossed."