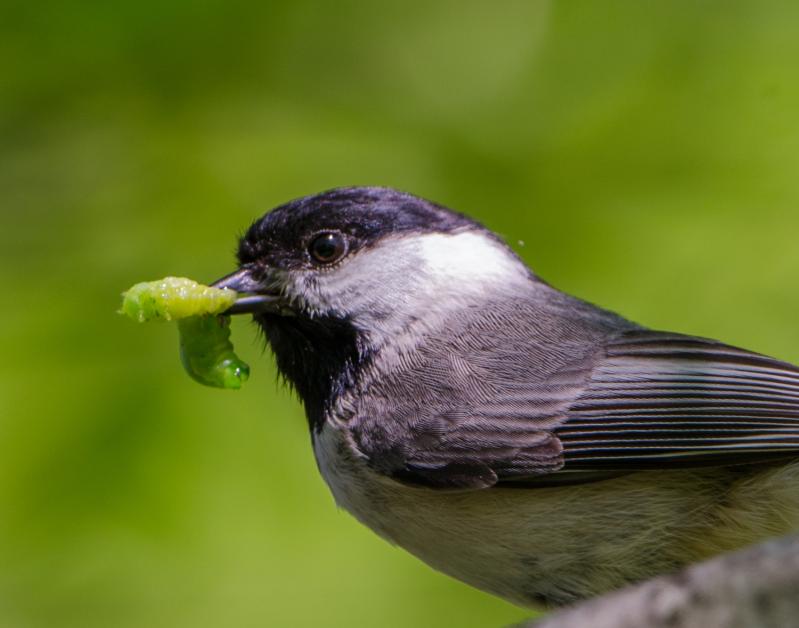 Like many of its feathered friends, the Carolina chickadee needs caterpillars to survive and feed its young, and it can find them in spring on leaves that fall to the ground in autumn.
Doug Tallamy
By Christine Sampson

The idea behind the new 2/3 for the Birds campaign is simple: By planting two-thirds of one's property with native greenery and abstaining from the use of pesticides, homeowners can help local bird species make a comeback.

Experts say it's a critical way to restore avian populations that have been dying off since the 1970s. NPR reported in September of 2019 that the North American continent had lost more than a quarter of its birds over the previous 50 years, mostly in the finch, sparrow, chickadee, warbler, and blackbird families. The primary reasons are the loss of natural habitat to development and the use of pesticides, which kill off the birds' food sources.

"When I heard about the big bird die-off, something clicked in my brain," said Edwina von Gal of Springs, the founder of the Perfect Earth Project, who quietly launched the 2/3 campaign along with several collaborators on March 21 -- the first day of spring.

"What do birds mean? They mean a lot. They are a key indicator species," she said in an interview. "When you lose your birds, it means that whole chunks of your food web and biodiversity are crashing. They're beautiful and charismatic. They are the 'canary in the coal mine,' but now it's the chickadee."

Ms. von Gal, a horticulturist and landscape designer, is sort of the spokesperson for 2/3 for the Birds. She hesitates to take full ownership because she wants it to belong to everybody -- not just environmental experts and leaders in the organic lawn-care industry, but everyday people who may not know the extent to which they can actually help enact change.

"It hit me one day. Why don't I reach out to start with everyone in my profession?" she said. "With this simple goal -- two out of every three plants you put in the ground or you put on a plan, and promise no pesticides -- then we could ourselves turn the bird decline around."

The project's website, 234birds.org, offers free tools and resources for property owners and landscaping professionals to use. The idea is "right plant, right place." Another example is leaving the leaves that fall to the ground in autumn.

"They often contain a lot of eggs of moths and butterflies, and that's part of the cycle," Ms. von Gal said. "They lay them on the leaves, the leaves drop, the eggs winter safely there and hatch in the spring. They come out as larvae or caterpillars and continue the cycle. By all of our tidiness, we have removed most of that habitat."

Even without heavily promoting the project, Ms. von Gal has attracted allies like Carl Safina and the Cornell Lab of Ornithology. She is not fund-raising for anything, and she does not intend to accept sponsors or endorse products.

"It's a completely commerce-free site," she said. "People are always asking me what I buy. It's really kind of the opposite of that -- don't buy fertilizers and pesticides. Even organics, if it's intended to kill something, it's a pesticide. It will kill things you don't want to kill."

Doug Tallamy, an entomologist and professor at the University of Delaware who wrote the best-selling book "Nature's Best Hope," has endorsed 2/3 for the Birds.

"The biggest problem we have now is a global biodiversity problem, and the solution is a grassroots solution," Mr. Tallamy said by phone earlier this month. "Every person who influences a piece of the Earth is going to solve it. It's the private landowner. Parks and preservation over the last 100 years isn't enough. Educate the public to say, 'Look, your property is more than an aesthetic showpiece.' It's part of the local ecosystem and the way you landscape is going to contribute to the ecosystem or degrade it."

His research has shown that a typical chickadee needs at least 6,000 caterpillars to successfully thrive and raise its young, and native plants are what harbor those caterpillars. Exotic plants like gingkos, kwanzan cherries, boxwoods, and crape myrtle won't cut it, Mr. Tallamy said. He also urges people to cut down on their expansive lawns; wild grasses or wildflowers will do just fine, he says.

He and Ms. von Gal agree that every person has an important role.

"You could have a window box in Bed-Stuy, and you're doing something. A butterfly could find your box just when it needs to," Ms. von Gal said. "There are so many ways that every little patch matters. If we all make a patch, your patch will not be an independent little patch for long. They'll connect and make something big."