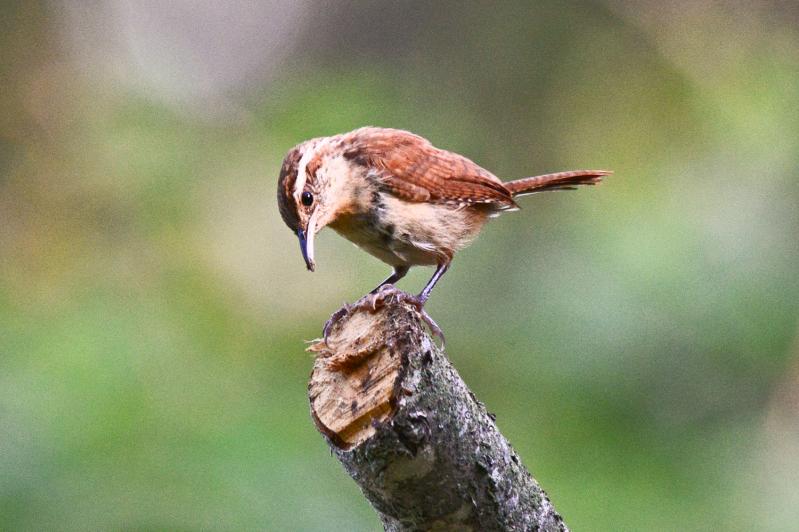 Everything happened at once.

A kerfuffle among the Canada geese tucked into a nook on the eastern side of the North Haven peninsula caught my attention, which caused me to turn away from the brightening sky farther to the east. At just that moment, a lacey line of 2,000 blackbirds, most likely a mix of red-winged blackbirds and common grackles, drifted south over North Haven and across the gray sky above Sag Harbor cove. As I watched the blackbirds disappear, the Carolina wren sang; it was 6:46 a.m., 13 minutes before sunrise.

I was on Long Wharf in Sag Harbor, watching the sunrise and doing an experiment of sorts. I wanted to see if I could hear a Carolina wren from this spot, a couple hundred yards out in the bay, probably a quarter-mile away from the nearest trees.

This bird, not six inches in length, sang a song that traveled clear across Sag Harbor Bay from some scrub in North Haven. Experiment complete, I walked down the wharf, past a Range Rover that had been idling for 30 minutes, and into town for a coffee.

Most widely familiar birds are known by their plumage. Think about the birds you really know . . . cardinals, great egrets, blue jays, mute swans. You know them almost instinctively because of the way they look. You don’t even think about it; you know what they are. If you saw a Carolina wren, it may not be so obvious. It’s small, sort of brown, and it rarely stays in one spot for very long. It’s a skulky bird that wants to hide out in a log or a pile of sticks.

But the Carolina wren’s song distinguishes it immediately. Once you hear it, you will know it, and notice it often. Call it a “spark song.”

Onomatopoeically, “Tea-kettle, Tea-kettle, Tea-kettle!” or “Germany! Germany! Germany!” works, but just listen for a loud, bright, often repeated, three-syllable song. The reason you hear and see these birds in December is because they are nonmigratory. In fact, they’re abundant year round. Or at least they seem abundant, possibly because they don’t shut up. According to the website allaboutbirds.org, one captive male sang nearly 3,000 times in a single day.

Carolina wrens are proud singers that often sing from an exposed perch. They tilt their heads back and let it go. If you hear their song and are close to it, check your nearest woodpile or shrub. Look for a sparrow-size bird with a rusty color, buffy orange breast, and striking white eyebrow. Its bill is long and slightly curved downward. Unlike the tufted titmouse in last week’s column, this bird is not a nut eater. Rather, it uses its long bill to probe for insects; it loves spiders, caterpillars, and even cockroaches. You may not see it at your conventional nut and seed feeder, but if you have a cake of suet, this striking bird may soon become your new neighbor.

Carolinas stay low to the ground, never far from bramble and brush, tangled stuff. You won’t see them exposed on your lawn. But, while they are skulky, they’re not shy, often nesting near residences in just about anything. In John Bull’s classic “Birds of New York State,” published nearly 50 years ago, he describes nest location as variable, including “bird boxes, stone walls, hollow tree stumps, tin cans, old hats or coat pockets, privies, shelves of houses and garages, crevices of a log house, crates in tool house, mailboxes, metal pipes, ivy on wall, on the side of an abandoned well, and even in an enclosed bird feeder.”

Last spring, my friend Jessica Webb found a pair nesting in a discarded delivery pallet in her Sag Harbor backyard. Due to lingering childhood memories of aggressive domestic geese, she is no fan of birds. Nonetheless, she was charmed by the presence of the Carolina wrens. “It was really cool to watch while I did dishes. They made lots of noise and the mother was

constantly feeding them,” she said by text. “Two weeks of constant activity.”

We hear a lot of doom about what is happening to bird populations, all of it true. Since 1970, North America has lost 3 billion birds, nearly a third of its population. However, the Carolina wren is one bird that is benefiting from the warming earth. In 1974 when Bull wrote “Birds of New York State,” the East End of Long Island was the Carolina wren epicenter of New York. He counted 12 nesting pairs from East Hampton to Montauk.

On the first day of winter in 2019, I counted eight in Camp Hero alone. It’s a nonmigratory bird, and the warmer it gets as we move north, the more territory it has.

I like this bird because it stays and it sings, even in the depths of winter. Its warm orange belly and rusty top might remind you of a little flame. Mary Oliver, the poet, described its song as “blazing.” And with its constant reminder to check your “Tea-kettle! Tea-kettle! Tea-kettle!” this bird is a wonderful winter bird to get to know.

Finally, I’d like to thank everyone who wrote in with stories of their own spark birds and words of encouragement. Any bird can be a spark bird. I heard from people sparked by American goldfinches, snowy owls, American robins, and cedar waxwings.

Do you ever notice birds? Think piping plover tastes like chicken? Whatever, we’ll get to that. In the meantime, I’m interested in your bird sightings, common and uncommon. Strange stories, normal stories. If they relate to birds, their behavior, or awareness in general, please drop me a line at [email protected].