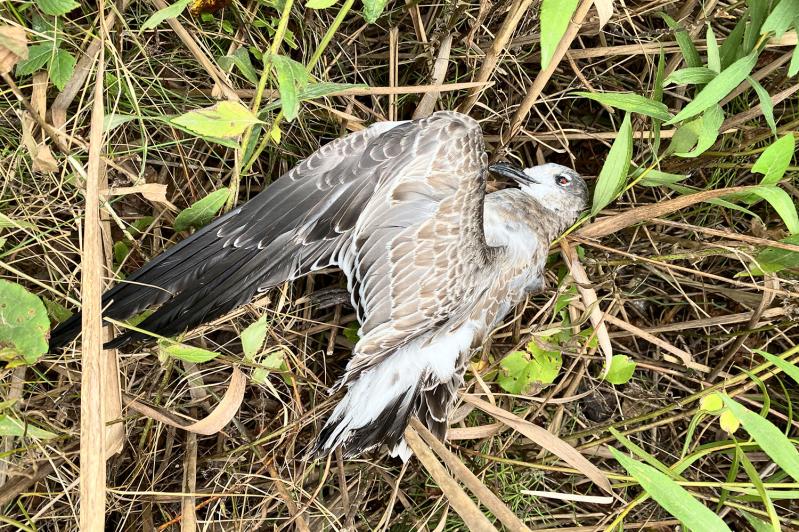 A dead laughing gull found near the PSEG-Long Island substation in Montauk was among 26 birds of the species that turned up dead or injured there in recent days.
Valinda Valcich
By Bella Lewis

What happened to 26 laughing gulls found both dead and injured, all in the same manner and all oddly clustered in an area near PSEG-Long Island's Montauk substation on Industrial Road?

This animal enigma left the shadow of a question mark over Montauk's Fort Pond area this week. Another shadow, slightly less looming, but also confounding was that of what some believed last week to be a three-to-five-foot-long alligator beneath the water in the pond.

Valinda Valcich, a volunteer animal rescuer for the Evelyn Alexander Wildlife Rescue Center in East Quogue, showed the picture taken by Artie Lucas, a Montauk resident, to a representative of the New York State Department of Environmental Conservation. "He did say it looked like between a three and a five-foot alligator from the picture, from the shadow under the water, but since that incident no one has seen it."

Ms. Valcich added that because of the cooler weather, if there were an alligator, it would be staying underwater to keep warm. She is continuing to monitor the pond.

Conservation officers with the D.E.C. inspected the pond on Sept. 27 and 28. "No alligators were located during these inspections," the D.E.C. said. "If people at the pond feel threatened by this animal, they should contact local law enforcement who may be able to respond more quickly to the site."

In the matter of the gulls, however, there was copious hard evidence. On Friday, "My husband called me up at 6 o'clock in the morning," said Ms. Valcich, the rescue center's on-call Montauk representative. "He said, 'Get down here to Industrial Road A.S.A.P. and call all the rescuers you have.' "

Ms. Valcich said she ran down and, with a colleague, picked up eight dead birds and six injured ones, which she took to the Veterinary Clinic of East Hampton. They had not been spread over a huge area, she said. A couple were on the road, but most were closer to the substation.

Elizabeth Flagler, a spokeswoman for PSEG-Long Island, was unaware of the gull incident when reached this week, perhaps because the birds had been found near but not on the substation property.

What struck Ms. Valcich most was that they are all of the same species. "They were all laughing gulls, no other species." The only obvious injury any of them had were broken wings. The birds found alive were very lethargic.

"This is definitely a suspicious scenario," said Julie Kelly, a licensed veterinary technician at the veterinary clinic, who added that in her 20 years on the job, "we usually don't see stuff like that."

Ms. Kelly ruled out the likelihood of a fishing line in that area that could have harmed the birds. "I think they might have been dumped there because I know someone was biking there at 5:30 to 6 a.m. before there were any birds on that road. Then they were found within the hour."

The D.E.C.'s officers received a report on Friday of several injured and dead gulls on Industrial Road. They visited the site and are investigating the incident, the agency said. "D.E.C. is in contact with the rehabilitation facilities to help determine what might have caused the injuries and death to these gulls."

The organization asks that anyone with information about the incident contact D.E.C. environmental conservation officers at 631-444-0250. Regarding the potential alligator in residence in Fort Pond, all other sightings should be reported to D.E.C.'s wildlife office at 631-444-0310. "If possible, D.E.C. urges anyone seeing this animal to take a picture of it from a safe distance to assist in identification."

Amanda Daley, the office manager at the Evelyn Alexander Wildlife Rescue Center, said most of the gulls went to the veterinary clinic, but the rescue center had received three. One was still alive, one had to be euthanized, and another was later transferred to the vet's office because of the severity of the wing break. It was later euthanized, as well.

The one gull still alive at the wildlife center is "not in great shape" Ms. Daley said. "It doesn't appear to have breaks or broken wings, but it is very weak and on oxygen and heat in a viral incubator." None of the X-rays have turned up pellets, but she said the D.E.C. asked the rescue center to continue checking, so she hopes the remaining bird will soon be well enough for an X-ray, which is a taxing experience for the animal.

Ms. Valcich remarked on the danger of "cars flying by Industrial Road and none of them are slowing down, I mean one of them didn't even move out of the way for me." Ms. Valcich said she called the police to ask them to monitor the road more closely. "It's the Indy 500!"

"It's so strange. Everyone was saying that maybe they ran into wires, they ran into the new poles, but one, I can't even see it running into that, and not 20 of them!" She believes there was no way that the gulls, which are dainty and more like pigeons, were flying that straight or in that uniform a formation. "And not one species. It would have been any other species of gull or another bird, anything."

If the birds had fallen out of the sky, Ms. Valcich speculated, "they might be in the phragmites or wetlands off of the Industrial Road area." She planned to search the reeds along the side of the pond.

"I don't know if those laughing gulls actually are like dolphins, where one gets stranded, they all strand themselves." Ms. Valcich reported that Jennifer Katz, the veterinarian who was on call at the clinic, told her that the injuries were not natural, all a clean break to the wing, which compounded the strangeness and left them scratching their heads.

The other puzzling thing was the lethargy of the birds. Everyone's first idea was to X-ray them for pellets or bullets as an explanation for the breaks, but they had to wait for the birds to be strong enough before doing so.

"If they were shot there would be a lot more damage than just a broken wing," Ms. Valcich said. Ms. Daley at the wildlife center also mentioned the fact that a bullet might not embed itself.

"We don't know," said. Ms. Daley. "We suspect either it's possible someone is shooting at them or it's possible they could have been traumatic injuries from people running into them on the beach."

All can agree that the location was "not a typical place for gulls to be, they would be on the ocean," Ms. Kelly said. Considering the injuries, rehabilitation was not a possibility for the veterinary clinic, "the kindest thing was to euthanize them all."