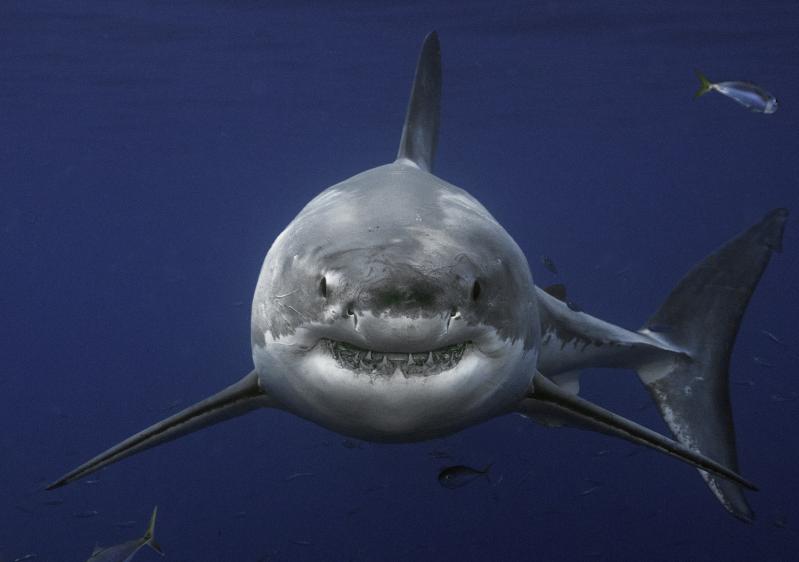 A white shark appears to grin for the camera as it swims off the coast of Guadalupe Island, Mexico. Long Island's South Shore serves as a nursery for juvenile great whites — and adults of up to 18 feet also visit our waters during the warm months.
Dr. Craig O'Connell
By Tom Gogola

Cue the ominous soundtrack and break out those classic lines from "Jaws": A handful of recent shark attacks and sightings on Long Island's barrier beaches has beachgoers on edge and out for blood. Yesterday swimming was suspended at Smith Point County Park in Shirley after a report of a shark attacking a paddle boarder. Last Thursday, a lifeguard was bitten in the foot at Ocean Beach. Another Fire Island lifeguard was bitten at Smith Point on July 3, and on June 30, a swimmer was bitten on the foot at Jones Beach.

Officials have responded to the rare human-shark interactions with red-flag beach warnings and enhanced shark patrols using drones and personal watercraft -- but don't blame the sharks, said Greg Metzger, chief field coordinator of the South Fork Natural History Museum and Nature Center's shark research and education program in Bridgehampton. The sharks aren't in local waters to feast on humans but on the vast schools of menhaden, or bunker, that have settled in for their annual summer residencies.

"There's no smoking gun, as far as why it's happening," said Mr. Metzger, "and no way for anyone to know exactly what's going on because we can't speak shark, but they are not here on Long Island to feed on people."

Research has shown that sharks compete with one another when feeding on the bunker schools -- and, "if there's multiple sharks there, they are pushing each other out of the way, bumping them out of the way," Mr. Metzger said. "So if a surfer or a lifeguard happens to be at the end of the school of bunker -- the sharks aren't going to move out of the way, they just see it as a large object that they're going to bump out of the way."

That science is almost never a part of the shark-bite media narrative, Mr. Metzger noted, and "killing all the sharks is not the answer" to this rare but jarring phenomenon. "That 'kill 'em all' mentality, 'we've got to cull them,' it's completely ridiculous," he said. "There are tons and tons of bunker schools along the South Shore of Long Island and the sharks [were] probably just going after [their] prey -- it's not known for sure, but that's just based on our observation. But they are not 'attacking' people -- that's a complete and total waste of their time."

Furthermore, Mr. Metzger said that most shark species found in waters where people swim don't have the capacity to tear big chunks of flesh from humans.

Long Island waters are especially welcoming to sharks, even if the humans are not. Most of the sharks the natural history museum catches for its studies are "juveniles who've come to a good place to live out the first few years of their life. Long Island is a great place for sharks."

It's also a rare-enough region when it comes to the much-maligned and feared white shark, star of "Jaws" and bringer of media feeding frenzies. In recent years SoFo has confirmed an oft-cited rumor that the New York Bight -- the waters from Montauk to Cape May, N.J. - are "indeed a nursery for great white sharks," Mr. Metzger said. "It's the only confirmed nursery for white sharks in the entire Atlantic and only one of three confirmed nurseries in the world. Again, Long Island is a very, very special place when it comes to sharks."

Mr. Metzger had some advice for concerned beachgoers who would like to enjoy other aspects of this very, very special place without worrying that they will get bitten in the foot or worse: Don't go swimming at the "magic hours" of dawn and dusk, especially if there is observable fish and bird activity in the water. Those are prime feeding times for sharks and other species.

Mr. Metzger also suggested that humans take a moment to appreciate what he called a "more-conserved" ocean that has been "the result of positive conservation efforts" not just for sharks but whales, dolphins, and other aquatic animals. "People need to educate themselves on how to deal with a more-conserved environment," he added. "If you see the birds, the bunker, there's feeding going on, so sit on the beach and enjoy the National Geographic show that's going on."

Craig O'Connell of the nonprofit O'Seas Conservation Foundation in Montauk echoed some of Mr. Metzger's observations and made a few of his own in an email exchange. His foundation has been studying the local shark population with video and tagging surveys over the past decade and is also deploying new technology to (hopefully) avoid human-shark interactions called an exclusion barrier.

The technology was tested recently in Montauk, Mr. O'Connell reported, "where we are aiming to determine if this visual and magnetic deterrent device may serve as a non-invasive and eco-friendly solution to allow for the peaceful coexistence of sharks and people in the very near future."

Mr. O'Connell highlighted the rarity of the recent human-shark interactions and said that absent two 2018 incidents in the Fire Island region, there hadn't been a reported shark attack on Long Island since 1948. "These incidents are quite rare in this region and not cause for any dramatic responses," Mr. O'Connell said. "After an encounter, it is wise to temporarily shut down the beach to assess the situation -- however, it is also wise to recognize that these incidents have resulted in fairly minor wounds in comparison to what they could be, so we must remember not to overly dramatize these incidents in the media to make sharks look like the bad guys."

It's hard to undo the negative stereotyping of sharks, Mr. O'Connell acknowledged while suggesting that humans ought to get to know these apex predators a little better -- either through shark tours or, for the more adventurously shark-curious, by swimming with the animals in the wild. For his part, Mr. O'Connell's organization hosts an annual Shark Camp tagging program for youth.

"Upon seeing one, you will realize that these are intelligent and inquisitive animals that are full of personality," Mr. O'Connell said. "Some are bold, some are shy, but it's that initial encounter in the wild that will change everything for you. The more people that have that encounter, the better off sharks will be -- since many people turn toward conservation efforts after their interactions."

Mr. O'Connell also stressed the importance of protecting the apex predators and the menhaden and other species that they feed on. "By doing so, we are helping maintain the balance to ensure a healthy marine ecosystem for many future generations," he said. "But beyond that, it's also important to recognize that some of the sharks that frequent our waters have an important top-down regulatory effect that helps maintain the delicate balance within our local waters. Sharks such as white, dusky, sandbar, shortfin mako, blue, and the common thresher are seasonal locals and without these sharks, I'm afraid of what our ocean would look like."

New York regulators have done their conservationist part to prevent overfishing of white, dusky, and shortfin makos in regional waters, but Mr. O'Connell said that the fish are here seasonally and, "as soon as they venture into international waters the rules change and these sharks are often targeted for their fins or captured as bycatch."

"So, while we may look off the beach on some days and see an abundance of sharks swimming through bunker pods," said Mr. O'Connell, "don't let that fool you. It's estimated that oceanic shark populations have declined by as high as 70 percent over the past few decades -- and we must do all we can to help prevent further population degradation since an ocean without sharks would be a very unhealthy one."

A Holiday Gift for Surfers and Beach Lovers
Holiday Lights Go On at the Lighthouse Saturday
Covid Vaccine Clinic at St. Luke's
END_OF_DOCUMENT_TOKEN_TO_BE_REPLACED