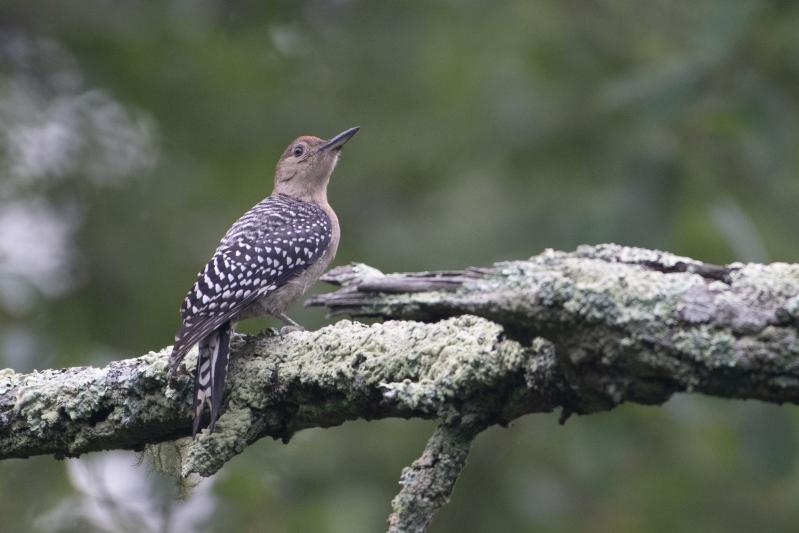 Even though it's only a juvenile bird, the red-bellied woodpecker pictured shows the zebra stripes from which it takes its colloquial name.
Jay Rand
By Christopher Gangemi

The first time I heard a red-bellied woodpecker, I was in my sister’s very suburban backyard. You don’t need to go deep into the woods to find these birds. I wasn’t into birds back then, but I was intrigued by the call: a burry chuckle from some invisible source. It was a mystery.

Years later when I finally realized what I was hearing, I was happy. The birds have been here forever, just waiting for us to notice them, and finally I had. What other songs was I missing?

But the red-bellied woodpecker is one of the most misidentified birds, largely because of its terrible name. Its belly is hardly red, and even if it were, the way it presses up against a tree with its stiff tail feathers to hike upward, you couldn’t see it.

Old-timers called it the red-bellied “zebra bird” for the black and white pattern on its back. Others called it “chad,” after one of its calls.

“Upon alighting, it often gives voice to the harsh, brassy cry of chad, chad, from which one of its local names has been acquired,” wrote T. Gilbert Pearson in “Birds of America.”

The 2000 presidential election tarnished that name just before the internet took over to really destroy it. Let’s stick with zebra bird, then.

The zebra bird is slightly smaller than an American robin with a bright red crown and nape. Its bill is heavy and black, and it sports a beady black eye that stands out on its white face. In flight, white wing patches show toward the end of its wings.

“In flight it exhibits to some extent the characteristic galloping undulating movement peculiar to most members of the family,” wrote Mr. Pearson. It takes a few hard flaps, gaining altitude, which it then loses as it pulls its wings tight to its body, before flapping again and rising. Because it usually lands on the vertical surface of a tree trunk, it has a unique style of approaching a tree.

Mr. Pearson called the zebra bird “a beneficial tree surgeon” which eats “largely noxious” insects with a tongue that extends two inches from the end of its beak. “The tip is barbed, and the bird’s spit is sticky, making it easier to snatch prey from deep crevices,” explains allaboutbirds.org. “They’ve even been spotted drinking nectar from hummingbird feeders.” Nestling birds and minnows, improbably, are also on the zebra bird’s diet. It stores food in crevices.

Nonetheless, despite its ability to find food anywhere, I see these birds often at my backyard feeder, dining on seeds but more often destroying my suet cakes.

They are master excavators. We’ve been lucky enough to have one nest in a dead limb of a beech tree the last three years. The male builds the nest, pounding at a hole, excavating wood pulp, and calling, repeatedly. Sometimes the male makes its “churr” call with wood pulp hanging from its beak, searching around, hoping a female bird will take notice of his work ethic.

In fact, the rise of beech leaf disease could be a temporary boon to the red-bellied woodpecker. Your tree guy will always urge you to remove dead trees. Of course, if there’s a real risk to your house, or family, they have to come down. But if your trees are not threatening your home, in time, they may become a bird’s home. Let them be. Enjoy their craggy gray appearance and watch them slowly disappear.

This time of year, the leaves are mostly down, and the sound underfoot is leaf on leaf and kicked rock. There’s a pleasant smell in the woods. Amanita mushrooms push through the brown carpet and the trees are suddenly gray. The sky is a presence again, making the woods brighter. The bare trees expose more zebra birds, and it seems every football field or so, another calls.

Five years ago, I counted 14 in late November in Hither Woods.

This is new. Were you to take a walk in the same woods 60 years ago, you might not have heard a single zebra bird. When John Bull wrote “Birds of New York State” in 1974, he noted that they were increasing, but a pair nesting in Noyac in 1971 were the only listed breeding birds east of the canal. Back then, Long Island represented the “northeasternmost breeding limit” of the bird.

In the last 20 years, they have begun to breed as far north as Maine.

“Oh, I see him. Cool!” said Rob Wellener, a relatively new birder, when he spotted a zebra bird as we walked two weeks ago in the Long Pond Greenbelt.

And they are cool. The East End is home to five species of woodpecker. The red-bellieds are not our flashiest woodpeckers (that award goes to the northern flickers), and they are our worst named. However, they are entertaining, resourceful, and the woodpeckers you’re most likely to notice in your yard.

It is the rare bird whose population is increasing, and a great bird to spot on our newly bare trees.

Get out there and listen for one while you kick some leaves down a trail.