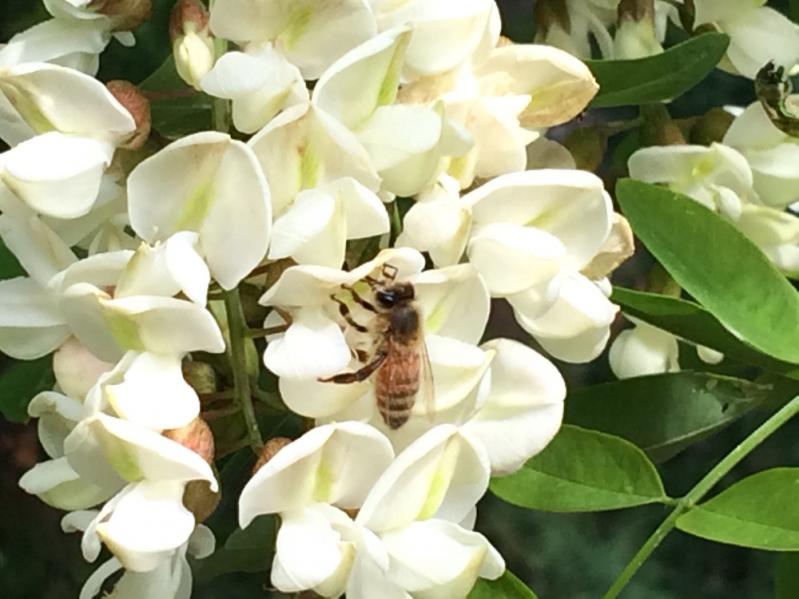 Thanks to a mild winter, honeybees had plenty of plant life to forage.
Mary Woltz
By Christine Sampson

When things greened up early this spring thanks to warmer-than-usual temperatures around here, humans weren't the only ones who noticed. Honeybees are thriving on the East End.

"We're having a boom of a season. The conditions this year are ideal for bees," Simon Bromberg, a beekeeper in Sag Harbor, said. "It's been an odd year, but favorable for the bees. We had such a mild winter that we never had a full soil freeze, which was driving the early bloom this season. There was a ton of forage early, so a lot of bees really took off well."

He said there's even been another wave: "A lot of really amazing stuff is blooming right now."

"I especially like this time of year, when the beehives are building up and gaining ground," Mr. Bromberg said. "You get to witness that renewal of life and that deep breath that we all take in the spring, when things are getting warm again and you see plants blooming again. It's a relief having made it through another winter."

Chris Kelly, a master beekeeper who owns North Fork Promised Land Apiaries, explained that the factors behind this phenomenon are the "photo period" — meaning the amount of sunlight on a given day — and the temperatures. Early on, the warmth works with the increasing amounts of daylight to have "a driver effect on waking up plants and insects."

"What happened with us this year, the way I looked at it, was in March we basically had April temperatures," Mr. Kelly said. "The plants are responding to both their drivers that are saying, 'Go, go, go.' For a while, the spring was several weeks ahead in terms of plant life compared to what the insect life was going to be."

Then, colder temperatures in April sort of became a wild card for bees here, but they appear to have survived. "Every time we've had really nice days . . . the bees have been swarming on a level I haven't seen in a long while," Mr. Kelly said.

Despite the momentum, there's a possible downside looming. "I suspect that the lack of a true cold period is going to end up being detrimental for us, largely because some of the parasites and pests that work into a beehive . . . are not going to be killed off or removed from the hive quite so easily," Mr. Kelly said. One threat in particular is the Varroa mite, a relatively recent arrival in the Northeast.

The booming buzzing this spring was not limited to the East End. In Penobscot County, Maine, beekeepers had a similar experience. In a column in April for The Bangor Daily News, Peter Cowin, who goes by the nickname the Bee Whisperer, wrote that "Mother Nature blessed my bees with a mild winter and now appears to be treating us to a steadily improving spring. Just what the beekeeper needs to see: rapid colony buildup." And in St. Louis, Mo., a public radio station reported that "demand for swarm collection services in Missouri has been strong this year, likely fueled by a period of warm early spring weather followed by lower temperatures."

Not everyone has had the same experience, however. Mary Woltz, who owns the Bees' Needs apiary, saw her hives suffer in recent months. She isn't certain why that happened.

But, she observed, "I think the mild winter may have helped the solitary bees survive, which are the vast majority of bees. The mild winter plus the early spring allowed the flowers to persist, like dandelions."

And she's been building her hives back up with the stronger stock of bees that did survive.

Beekeepers here are known to divide up their hives among multiple locations because they want to provide ample opportunities for them to forage. Too many bees in one place isn't good for them all.

Another thing that's not good for the bees: vast green lawns, cropped short and treated with pesticides. "These green lawns are just a travesty," Ms. Woltz said. "We've all heard about the beautiful soils out here. They grow really big houses, for sure, but to only grow green lawns is a mistake. We've lost so much of our wild habitat . . . so it's even more important that we plant what the bees need."

Flowering and native plants, access to water, shelter — that's what they need. And it goes without saying, landowners can't use pesticides. There have been a few recent but fairly isolated incidents here of homeowners spraying, killing everything that buzzes, flies, and crawls — even the helpful critters.

But on farms, Mr. Kelly said, "I haven't seen that in years, which I think speaks volumes to the education of the farming community out here on the East End. I think they do a remarkable job trying to balance making a living and being good stewards of the farmland."

Mr. Bromberg said that years ago, he actually worked as a pesticide applicator, but has changed his tune dramatically. Imperfect lawns are a perfect solution to many environmental problems these days, he said, from the survival of bees and other pollinators to letting less nitrogen and fewer pollutants flow into our water supply.

"The unfortunate reality is that it's primarily a demand-driven industry," he said. "As long as the clients these guys work for demand perfection in all of their ornamental plantings and lawns, they are going to be forced to spray. We need to change the perception of how we keep our properties and maintain our lawns and ornamental plantings."

Ms. Woltz reflected on the way bees work together in colonies, saying it's gratifying to open up their "inner sanctum" and witness "their industry."

"I laugh when I hear story after story about quarantine and confinement, and then I think of the bees and close to 100,000 little beings all stuffed into a few boxes. We have so much to learn from them."