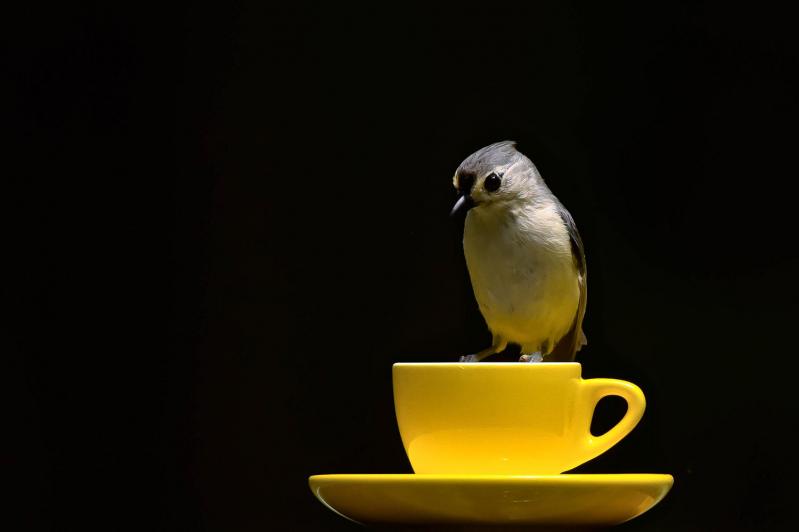 This is a column about birds — which ones are present at any particular time in our area and where you might be able to find them — but I think it’s also about something more.

First things first, because this is important: Glance out the nearest window, right now. That’s habitat. Habitat for birds and countless other insects and mammals. It’s crucial to see it as habitat and not just something with human value. First, it’s habitat.

Okay, back to the birds. For this first column, I thought of profiling some charismatic mega-avifauna here, like our newly resurgent bald eagles, or perhaps our often discussed wintering snowy owls. In the end, I decided to go with a different type of bird altogether: the “spark bird.”

Once you see or hear a bird that makes you ask that question, you will realize that you are basically surrounded by birds, all types, filling every imaginable niche. Once sparked, the questions keep coming.

Birds have surrounded you since birth, each day singing, flying in front of your car as you drive, sometimes crashing into your windows, or being eaten by your cat. In fact, they’ve been here long before your birth, for something like 60 million years. All I ask here is that you notice them. If you haven’t been sparked, perhaps this column will help to spark you.

How was I sparked? It was December of 2001 and we had just moved into a rental in Noyac, part of the influx of people who moved to the East End after 9/11. The owner had a bird feeder off the back of the house. One day, not long after we moved in, I noticed a gray bird on it. It had a crest, which seemed to come and go and was darker gray than the rest of its body. The bird had lots of personality. It would take a split peanut from the feeder, fly up to a nearby branch, and then hammer the nut on the branch.

I was fascinated. I had never seen one before. It was a tufted titmouse. My spark bird.

Tufted Titmice are common out here. At the Elizabeth Morton Wildlife Refuge in Sag Harbor, they will surround you and if you’re not careful, steal your wallet. You can find them at your feeder, where you can attract them with sunflower seeds, peanuts, or suet. And that’s fine, but I encourage you to try and find them “in the wild.” Think of it as a sort of bird scavenger hunt, a challenge. If you take a walk around Long Pond in Sag Harbor, Crooked Pond in Bridgehampton, Cedar Point in East Hampton, Hither Woods in Montauk, or any sort of parkland with deciduous trees, you should see them.

When you are out looking for birds, you must also use your ears. While they are not singing much here in the late fall, since they’re not looking to nest and attract mates, they still communicate with one another. Tufted titmice in particular are very vocal birds. In the spring they often call out a repetitive “Pe-ter! Pe-ter! Pe-ter!” However, in the late autumn and winter, you mostly hear them make squeaky sounds.

Besides what they take from the feeders, tufted titmice eat many insects, including our newly introduced pest, the stink bug. They nest in tree cavities; however, there’s a catch. While some birds are capable of creating their own cavities, like many woodpeckers, for example, the titmouse cannot excavate. In short, it relies on natural cavities. That gets us back to that little exercise regarding habitat. Those dead tree limbs? They are not all that bad. In fact, many birds are dependent on them. Think twice before you remove every single one from your property. Don’t trust your “tree guy” to think about this for you. Be an advocate for dead tree limbs.

One crazy thing about titmice? They’ll jump on a wild animal, like a raccoon, or perhaps even a domestic animal, maybe your dog, and steal some of their fur to line their nests. Gutsy little things.

The last time I saw a titmouse was, well, just this week. In fact, I was removing a large fallen branch from my yard, and, if I’m to be honest, I was grumpy. It’s not important why, some forgettable and fleeting reason, but I was grumpy enough to notice, perhaps with too much attention, the whine of a distant leaf blower.

Then I heard something else, another whine, more like a squeak, followed by a repetitive chatter. Looking up, I saw it, the titmouse, hopping from branch to branch, upward. The leaves of the beech tree were golden, orange, and perfectly lit by a lowering sun that had completed the fair share of its western journey for the day.

Against this backdrop, the unremarkable mouse-colored gray of the titmouse was a wonderful contrast. For that moment, the titmouse was the tree, in the space of the tree, and it shared equally the full beauty of the autumn color simply by being separate from it.

Even more important, for that moment, I stopped noticing the dumb leaf blower and my sour mood. I too became part of the tree, simply by observing the bird in it, my dull gray, utterly common spark bird.

It’s been 20 years since I noticed my first titmouse in those post- 9/11 days. Now we have a whole new influx of residents, who have moved east since the pandemic. I can’t help but wonder if there are some “pandemic people” out here now, or even old-timers, wondering what bird is waking them up each morning by singing “Tea-kettle! Tea-kettle! Tea-kettle!” I’ll write about that bird, the Carolina wren, next week.

More than a column, this is a conversation. I’m not the best birder in the world, and I’m not a scientist. I am simply interested in noticing, and becoming aware of all the things we ignore which are right in front of us, like birds.

Ever notice the birds? Think piping plover tastes like chicken? Whatever, we’ll get to that. In the meantime,

I’m interested in your bird sightings, common and uncommon. Strange stories, normal stories. If they relate to birds, their behavior, or awareness in general, please drop me a line at