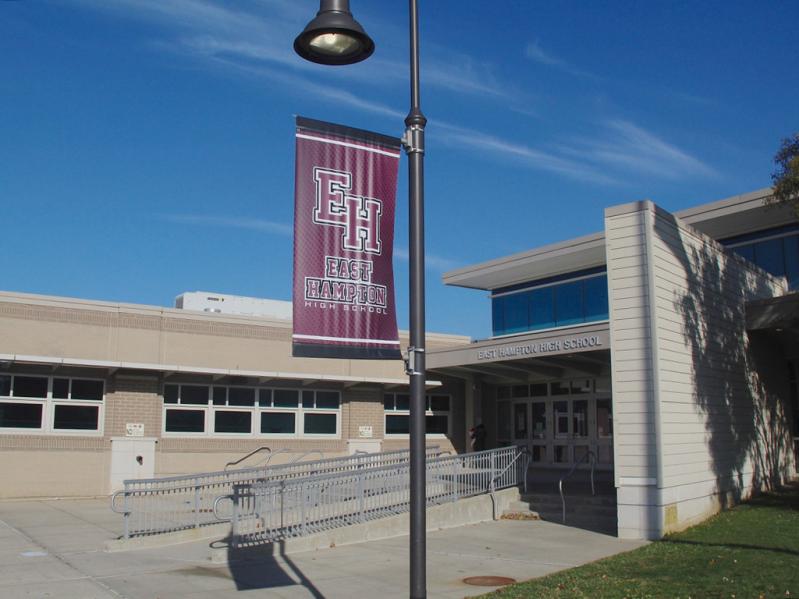 East Hampton High School shifted to remote instruction on Thursday and Friday. A decision about the coming week will be announced on Saturday.
Durell Godfrey
By Christine Sampson

Spurred by an avalanche of positive Covid-19 cases over the holiday season among families, kids, and teachers, virus-related impacts have been fast and furious in coming to South Fork schools.

New York State has canceled the January Regents exams, and on Friday announced that students attending state colleges must get booster shots and submit to mandatory testing before the spring semester begins. One local educational facility, the Eleanor Whitmore Early Childhood Center, stayed closed for two days this week while requiring families to provide proof of negative Covid tests before children could return. Through the Eastern Suffolk Board of Cooperative Educational Services system, districts here received thousands of at-home Covid test kits to distribute to families.

And school officials are still struggling to get the message out to parents that children who are sick with colds or Covid or who were exposed to Covid-positive family members need to stay home to prevent further spread, all while trying everything they can to prevent a return to remote classes. That is universally seen as a last-resort option for districts.

"It's called public health for a reason, not private health. It's public health," Sarah Minardi, an East Hampton School Board member, said during Tuesday's board meeting. "We're all trying to keep each other safe. If someone in the family is sick, they need to stay home. We need to protect our community."

The key factor in keeping schools open is having enough teachers, substitutes, and support staff working in-person. "We are definitely close" to not having enough at East Hampton High School, Adam Fine, the district superintendent, said Tuesday. "We're at the highest we can be without closing that school."

East Hampton High School alone reported 40 new cases on Monday. "Though we know this number is alarming, please keep in mind that this included all reported cases from the holiday break," Sara Smith, the principal, said in an email to families.

Today and tomorrow, remote learning couldn't be avoided at East Hampton High School. Adam Fine, the district superintendent, said in an email to families that there were too many staff members and students out sick. "A decision on the following week will be made by Saturday, Jan. 8, in the afternoon. It is my hope that this short break will allow our staff to get well and curb the spread that seems to be occurring in our high school community."

The district is still requiring a 10-day quarantine for positive cases and exposures, Mr. Fine said. That's because the Centers for Disease Control's recommendation of five days applied only to essential workers, not to the general public as a whole, and the recommendation has not yet been adopted by New York State. Therefore, it has not been adopted by the Suffolk County Department of Health Services, which means that the district's medical advisers have not made it their own recommendation as well.

For those students who are quarantined, districts are required to provide tutoring: 10 hours per week for middle and high school students, five hours for elementary students. Due to the sheer numbers, Mr. Fine said, there has been somewhat of a lag in that system. "We might be at a point, though, where we have to click that livestream on," he said. "We're resisting to do that because of the adverse stress. . . . It was not a positive experience for most of those involved."

Charlotte Sasso, a parent of a high school student, called into Tuesday's meeting to say she has heard of cases where students are coming back to school before quarantine is over, and cases where people are hesitant to test in the first place because of what a positive result would mean.

"I think some people are afraid to get tested, given that they would miss that much school and the symptoms can be so mild," Ms. Sasso said. "The most important thing is to be honest and pay attention to public health. . . . What's good for the community is good for your student in the long run."

The number of students absent from school varies by district. East Hampton and Springs administrators, for example, said Tuesday that there wasn't a significant increase in their districts, but in Montauk, 125 kids were absent, about 38 percent of the student population. Jack Perna, the district superintendent, said it was a combination of "some fearful, some in isolation, some in quarantine, and many parents heeding our request to not send in the kids with any symptoms."

East Hampton handed out about 400 at-home test kits on Tuesday, and expected to distribute more yesterday. Montauk gave out 200. In Springs, about 300 families received them.

"Kids deserve to be in school, but I can't worry about academics at this time," said Debra Winter, the Springs superintendent. "I'm worrying about what their minds are like. Are they happy? What can I do to make the staff feel comfortable? Giving those tests out on the weekend went a long way toward being able to come back on Monday."

In the Sagaponack School District, none of the kids tested positive on the at-home tests they received. Jay Finello, the superintendent, said Eastern Suffolk BOCES deserved high praise for their efficient and effective distribution of the at-home tests.

"They got them out within a day -- and it was New Year's Eve," Mr. Finello said.

Julie Lutz, chief operating officer of Eastern Suffolk BOCES, said it gave out about 151,800 tests in total. "The timing was the only challenge, as many districts were not working that week. But during this time, most people are monitoring email," she said. "We had 100 percent of a response rate with minimal need for follow-up." The benefit, she said, is that the kits arrived at a time when it is otherwise tough to get tested by other means.

In Suffolk County, every day for the past week more than 27 percent of Covid tests have come back positive, a rate that shattered records set at any point since testing became widely available. The seven-day average rose from 19.2 percent on Dec. 29 to 26.6 percent on Monday, when 3,806 of the 13,539 tests results reported were positive. In terms of the number of positive results, Suffolk set a new record on New Year's Eve, with 6,803 of the 24,771 tests positive for Covid-19.

The meteoric rise in cases has been attributed to the highly contagious, but reportedly milder, Omicron variant, which accounted for more than 90 percent of samples sequenced and reported in New York State between Dec. 21 and Monday, according to Gov. Kathy Hochul's office.

"The information I'm getting is that there's a really wide outbreak of Covid Omicron within the community," East Hampton Town Supervisor Peter Van Scoyoc said after Tuesday's town board meeting. "The good news is that people who are vaccinated are not getting severely ill, more like flu-like or cold-like symptoms. In many cases, people are finding they are positive and not experiencing any symptoms. I suspect that we will see this run its course, play out as we did last year with the holiday season. . . . Hopefully, as this current surge subsides . . . this will be the end of Covid."

In his annual state of the town address on Tuesday, Mr. Van Scoyoc said that more than 10,000 people have received vaccines through town-hosted clinics, "resulting in East Hampton having among the highest rates of vaccination on Long Island."

The town will offer first, second, and booster doses of Covid-19 vaccines at five more clinics scheduled at Town Hall in February. A separate article in today's paper has details about booking appointments.