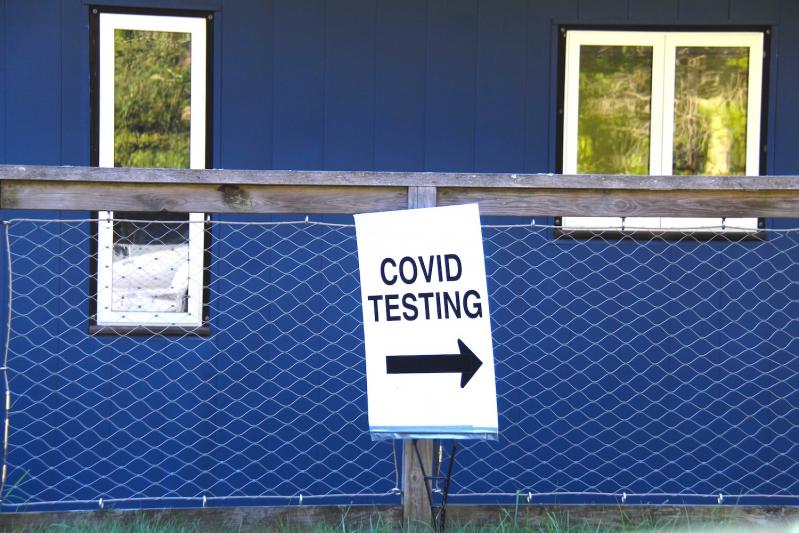 There has been a significant drop in demand for Covid tests at the CareONE site on Stephen Hand's Path.
Durell Godfrey
By Christopher Walsh

Starting this week, East Hampton Town’s Covid-19 testing site at 110 Stephen Hand’s Path in Wainscott, operated by CareONE Concierge, will only be open on Fridays from 10 a.m. to 5 p.m.

Until this week, it was also open during those hours on Wednesdays.

Jason Cavolina of CareONE said that the change was due to a significant drop in demand for tests, “and it costs double what the site makes to keep it open,” he said. Friday has been the busier of the two days the testing site was operating, he added.

CareONE Concierge will maintain the Friday-only schedule “for a couple of weeks,” Dr. Cavolina said, before reassessing its continued operation.

Supervisor Peter Van Scoyoc agreed on Tuesday that the need for testing has diminished, citing as an example airlines’ curtailing of the requirement that passengers present a negative Covid-19 test before flying. The site may be closed altogether, “depending on demand,” he said.

CareONE Concierge had originally planned to close the site on April 1, after the volume of residents seeking tests had fallen to below 25 per week, but reversed that decision as concerns about the virus’s BA.2 subvariant and the spring school break sparked renewed demand for tests. The site was open, with expanded hours, on Monday, Wednesday, and Friday from early February to March 23. Before that, the site had been operating six days per week.

Between Sept. 25 and Sunday, 25 tests were conducted at the CareONE site, with five of the results positive for the virus, a rate of 20 percent. During the previous week, just 11 tests were conducted, with two of them positive, or 18.18 percent. Just one of 12 tests given during the week of Sept. 12 was positive, but all of the four weeks before that saw double-digit positive infection rates among the small number of people being tested.

“We do want it there for as long as we can,” Dr. Cavolina said of the site on Stephen Hand’s Path, “but there are some concerns in keeping it open,” he said, again citing the expense. “In the grand scheme of things,” he added, “we hope they all close.”

The federal Centers for Disease Control and Prevention has approved two updated Covid-19 booster shots, one from Moderna for people 18 and older, the other from Pfizer for those 12 and older. Medical professionals are urging people to get the new bivalent booster shot, which protects against both the original strain of the virus and the now-dominant BA.4 and BA.5 subvariants.

The booster shots are available by appointment at the Walgreens and CVS pharmacy chains, and Stony Brook Southampton Hospital announced that the Pfizer booster shot will be offered today at its Parrish Memorial Hall. Those who completed a primary vaccination series or received their most recent booster shot at least two months ago, or were infected with Covid-19 at least three months ago, are eligible. Those wishing to make an appointment can do so at bit.ly/3rphglw.