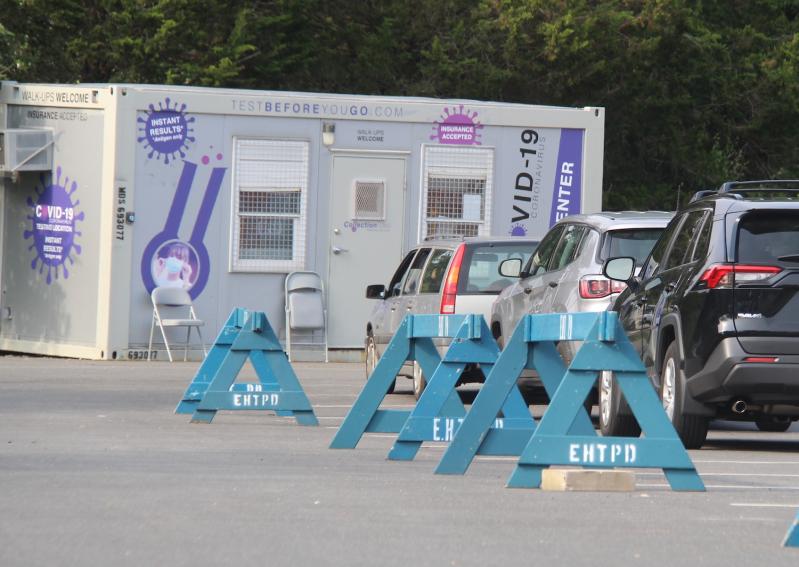 To ensure that people receive timely Covid-19 test results, Medivolve, the company that runs drive-through test sites at East Hampton Town Hall and in Montauk, is now testing by appointment only.
Durell Godfrey
By Jamie Bufalino

A recent surge in Covid-19 infections on the East End is predominantly among those who are unvaccinated, and the Delta variant of the virus is the cause of more than 90 percent of cases, according to Dr. Fredric Weinbaum, the chief medical officer at Stony Brook Southampton Hospital.

Infection rates in Suffolk County have been inching up since late July, according to data from New York State. On Sunday, 426 people tested positive, the highest number since April 16, and the seven-day average infection rate reached 4 percent for the first time since April 12.

East End infection rates largely correspond with the county numbers, said Dr. Weinbaum, and the uptick in cases can be traced back to gatherings held more than a month ago. "We're seeing a post-Fourth of July surge," he said. "But the good news is that more people here are vaccinated, so fewer patients are in the hospital and the I.C.U."

Of those who are hospitalized, the "overwhelming majority," 85 to 90 percent, are unvaccinated, he said, and the age of patients is trending younger, primarily because vaccination rates are high among older populations.

Unvaccinated people also make up the "vast majority" of patients at Peconic Bay Medical Center in Riverhead, which has seen a recent rise in hospitalizations, said Amy Loeb, the executive director. "We're getting about one to three patients every day," she said. The number of people seeking tests at the hospital's emergency department and outpatient clinics has also increased. The influx of patients is nowhere near the levels seen in the spring of 2020 or in January, she said, but the variant is clearly proving far more contagious than earlier strains of the virus.

At an East Hampton Town Board meeting on Tuesday, Supervisor Peter Van Scoyoc said the increase in infections may lead to a return to remote board meetings. He also addressed residents' complaints about Medivolve, the health care technology company the town hired to provide drive-through Covid tests. Since January, the company has been conducting P.C.R. nasal swab testing, rapid antigen testing, and antibody blood testing at a site on the Town Hall campus, and at one in Montauk.

Recently, some residents have said they were turned away because the sites had run out of supplies to do rapid testing, and others reported long delays in receiving test results. Mr. Van Scoyoc said the company has been unable to keep up with the current increase in demand for testing. He talked to Medivolve representatives this week, he said, and urged them to retool their operations. To ensure that people receive timely results, the sites are now limiting the number of the tests offered, and testing is by appointment only. Walk-ins will not be accepted, he said.

Dr. Weinbaum described the Delta variant as a "survival of the fittest" version of Covid-19, a virus that has evolved to prolong its lifespan. It has become more easily transmitted, and better at replicating, entering the body's cells, and avoiding the natural immune response. "The viral loads are much higher in the infected right now," he said.

Vaccination rates on the South Fork are some of the highest in New York, ranging from 81 percent in Sag Harbor to more than 99 percent in Sagaponack, Amagansett, and Wainscott, according to the state, figures that may not include the large influx of seasonal residents and visitors. Even those who are vaccinated can develop "breakthrough" infections, because the variant is adept at finding hosts, Dr. Weinbaum said. Since vaccinated people make up a large majority of the population, they are the most abundant targets. Breakthrough cases remain relatively rare, however, he noted.

Although infection rates may increase in the fall, when more indoor gatherings will make it easier for the virus to spread, the region's high vaccination rate will mean that far fewer people are likely to be hospitalized than during the same period last year, Dr. Weinbaum said. "My plea to everyone who is not yet vaccinated is to please get vaccinated," he said. He described the scientific trials done to assess a vaccine's safety and efficacy as the "gold-standard" of research. The hospital will continue to offer vaccinations, with no appointment necessary, at Parrish Memorial Hall, and work with local organizations to set up vaccination clinics. When asked whether he would like to see the state and federal governments mandate vaccinations, he said, "For the good of public health, yes."

Hospital staffers are especially eager to see more people get vaccinated, Ms. Loeb said. After more than 17 months of treating Covid patients, "we're keeping our heads up, and doing what we're here to do, but it's been a long haul," she said of staff morale. "Health care workers are known for being resilient, but it's getting harder to be resilient."

Although Dr. Weinbaum and Ms. Loeb do not expect to see their hospitals inundated with patients as they were in the early days of the pandemic, both said that they are preparing for the worst, and hoping for the best.