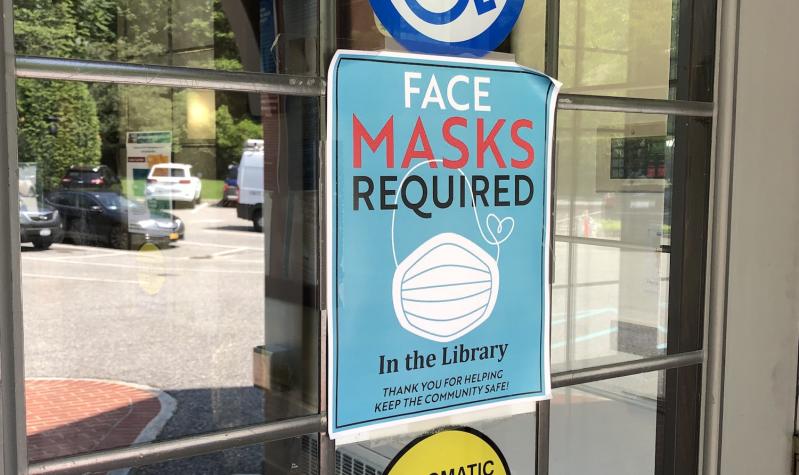 With Covid-19 infections on the rise again in Suffolk County, South Fork business owners are reinstituting mask mandates and other safety protocols.

On May 13, when the Centers for Disease Control and Prevention deemed it safe for fully-vaccinated people to go maskless except in certain settings such as on planes, public transportation, and at medical facilities, the average infection rate in the county over a seven-day period was 1.1 percent, according to New York State. Six days later, when Gov. Andrew M. Cuomo announced that the state would adopt C.D.C. guidance and lift mask and social distancing mandates at retail stores, gyms, salons, and other businesses, the infection rate had dipped to .9 percent.

The spread of the highly-contagious Delta variant of Covid-19 has since caused rates to surge. On Monday, the daily infection rate in the county was 4.7 percent, and the seven-day average was 3.7 percent. The number of people testing positive for Covid-19 in early August in Suffolk has been eight times or more higher than the number of people testing positive in early July.

Late last month, the C.D.C. updated its guidance, and recommended that vaccinated people in regions with "substantial" or "high" levels of community transmission wear masks indoors in public places. Suffolk County had been in the "substantial" category at the time, but it is now in the "high" range, according to the agency. After the C.D.C. issued its new recommendations, the governor encouraged local governments and businesses to enforce them, but a new statewide mask mandate has not been issued.

East Hampton Town is once again asking those who attend meetings Town Hall to wear masks regardless of their vaccination status. And the East Hampton Library, which had been allowing vaccinated patrons to go without masks, is now requiring that everyone don them again.

Eric Lemonides, an owner of Almond in Bridgehampton, took matters into his own hands and went a step further, putting in place a stringent safety protocol at the restaurant. Proof of vaccination or a recent negative Covid test is now required of all customers 12 and older. "We got to a point where we realized we had to take a stand," said Mr. Lemonides. "We've always prided ourselves on creating a safe, warm, convivial atmosphere, and we wanted our customers to get back to that feeling of two years ago when everyone was giggling and laughing, and enjoying mussels."

The pandemic has hit restaurants harder than nearly any other industry, he said, and he doesn't want those who refuse to get vaccinated to jeopardize the effort to get back to life and business as usual.

"There needs to be a line drawn right now and I'm not afraid to draw it," he said. For those who walk in without proof of vaccination, Mr. Lemonides tries to find a way to help them comply with the rules. When one recent guest told him she had left her vaccination card on her nightstand in New York City, he showed her how to download the state's Excelsior Pass, a digital record of vaccination, onto her smartphone. The restaurant also accepts proof from similar apps from other states. The customer response to the policy has been overwhelmingly positive. "Everyone makes the point to stop and tell me how happy it makes them," he said. "They say, 'We're going to keep coming back because we love the fact that you care about us.' "

Nicole Castillo, an executive vice president at WordHampton, a public relations company that represents a multitude of East End restaurants, said that, as of now, none of the firm's other clients has followed Almond's lead. Several eateries are requiring masks, however, including Simply Sublime, a takeout spot in East Hampton, the Dockside Bar and Grill and Provisions in Sag Harbor, and Hampton Chutney in Amagansett.

On Sunday, Duryea's Lobster Deck in Montauk announced that "due to the recent surge [in] Covid cases" it was closing for two days for a deep cleaning.

Annie Barton, the owner of the Salon and Day Spa at Amagansett Square, said masks are currently optional for vaccinated customers. None of her employees or clients have contracted the virus, she said, and the staff is vigilant about hand sanitization. Like many of the Montauk business owners, she is waiting for the state to issue a mask mandate before implementing one herself.

SLT gyms in East Hampton and Southampton are allowing clients who show proof of vaccination to go maskless, but they are still encouraged to wear them, said Amanda Freeman, the founder. Those who are unvaccinated must wear a mask. "We believe this policy best protects our staff and clients in the current environment," she said.
--
Correction: An earlier version of this story incorrectly said that all visitors to East Hampton Town Hall and other offices were required to wear masks, regardless of vaccination status. In fact, that requirement had applied only to those attending meetings at Town Hall. However, as of Monday, Aug. 16, all visitors to town facilities are again asked to wear masks regardless of vaccination status.