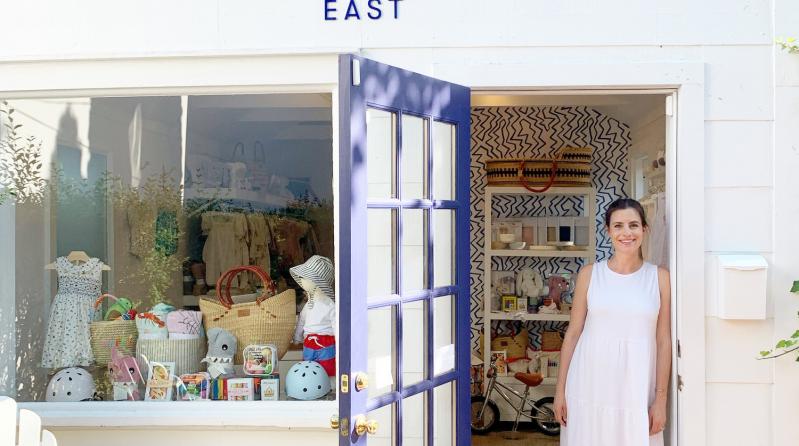 Alex Magruder, the owner of the Little East children's store in the village, said the uptick in people who have been vaccinated has been a boon for business. "You can see that people are less hesitant to come in," she said.
David Magruder
By Jamie Bufalino

After having spent more than a year following Covid-19 precautions, East End residents who are fully vaccinated are easing back into normal life with shopping trips, dinner parties, and family get-togethers.

"I was in a total self-imposed lockdown with my husband for 11 months, we never even ventured into a store until we were vaccinated," said Marie-Chantal of Greece, who was shopping on Main Street in East Hampton Village on Monday. "Now I do what other people did before."

"I haven't been to a supermarket in over a year and it was like going to Saks Fifth Avenue," said Randi Strauss of Water Mill. She and her husband, Marc, had been so wary of contracting the virus, "we bundled up and ate outdoors in 34-degree weather all winter," she said. Even though they are both fully vaccinated, the couple are not yet comfortable with eating indoors at restaurants. "We've worked so hard for so long, why blow it now?" Mr. Strauss said. "The odds of getting the virus are probably small, but it just makes me feel more comfortable to wait until we have herd immunity, and there's an understanding of the virus variants."

Jim Blauvelt, an East Hampton resident, celebrated his vaccination milestone by inviting vaccinated acquaintances over for a mask-free evening at his house. "The first thing I did was host three dinner parties in one week," he said. "One of my favorite guests was a woman in her 60s who walked through the front door and yelled at the top of her lungs, 'Somebody kiss me, quick.' "

For some residents, being vaccinated has meant being able to have a carefree day on the job. "It makes me less nervous to be around customers," said Timothy Reylek, who works at Park Place Wines and Liquors in East Hampton Village.

"I'm just trying to keep it away," Phil Schook, a UPS deliveryman, said of the virus. "I wear the mask even though I've got the vaccine." Before being vaccinated, he and his wife had only socialized at home with friends who were equally vigilant about quarantining, he said, and now, "we go out to dinner with maybe two other couples, and yesterday we were out to lunch with my in-laws. There were about eight of us celebrating their 65th anniversary."

Alex Magruder, the owner of the Little East children's store in the village, said the uptick in people who have been vaccinated has been a boon for business. "You can see that people are less hesitant to come in," she said. "They tell you, 'We're vaccinated,' and you can sense the relief."

Being vaccinated has allowed Amy Gorman and her husband to "move around freely without having to be tested every time we want to go somewhere," she said. The couple has since attended New York Rangers and Yankees games.

After having made several unsuccessful attempts to book a vaccination appointment earlier this winter, including taking a hapless trip to a CVS in Waterford, Conn., Britta Le Va was recently vaccinated at East Hampton Town's clinic in Wainscott. "It was easy-breezy," she said. She has not let her guard down against the virus — she still wears a mask, applies anti-bacterial lotion liberally, and wipes down grocery store purchases — but she is optimistic enough about the state of the pandemic to entertain the notion of throwing a party for her husband's 80th birthday on May 21. In fact, she's invited friends to stay over for the occasion. The friends had contracted the virus, and have since been vaccinated, "so I think that's pretty safe," she said. Still, she's not fully convinced the time will be right for such a gathering. Friends have suggested holding the party at a later date, "but in this house we don't do birthdays on a different day," she said. The compromise? "I've asked people to save the date, and then we'll decide when it gets closer."

In New York State, nearly 32 percent of residents had completed their vaccine series as of Tuesday and nearly 45 percent had gotten at least one dose.

In addition to seeing friends, shopping with less worry, and getting that great big kiss, people who are fully vaccinated have another thing to look forward to: Gov. Andrew M. Cuomo announced Tuesday that the state would immediately adopt guidance on mask use issued by the Centers for Disease Control that day. For those who are fully vaccinated — meaning they've passed the two week waiting period after a second dose of the Pfizer or Moderna vaccines or the single dose of the Johnson and Johnson vaccine — masks will no longer be required outdoors "except in certain crowded settings and venues." They will still be required indoors and by people who are not yet fully vaccinated. The guidance says that "when Americans who are fully vaccinated are outside, biking, hiking, running, or in small gatherings, you don't need to wear a mask," the governor said Tuesday. "That is liberating, especially now that the weather is getting warmer. . . . This news underscores the fact that if you get vaccinated, more freedom is available to you. . . ."

To make it easier to get vaccinated, as of today appointments will no longer be required for first doses at all of the state's mass vaccination sites, including the one at the Stony Brook Southampton college campus. The state has encouraged all vaccine providers to follow suit and allow walk-in appointments for anyone eligible. The Pfizer vaccine has received emergency use authorization for people 16 and older; the Johnson and Johnson and Moderna vaccines are authorized for people 18 and older.