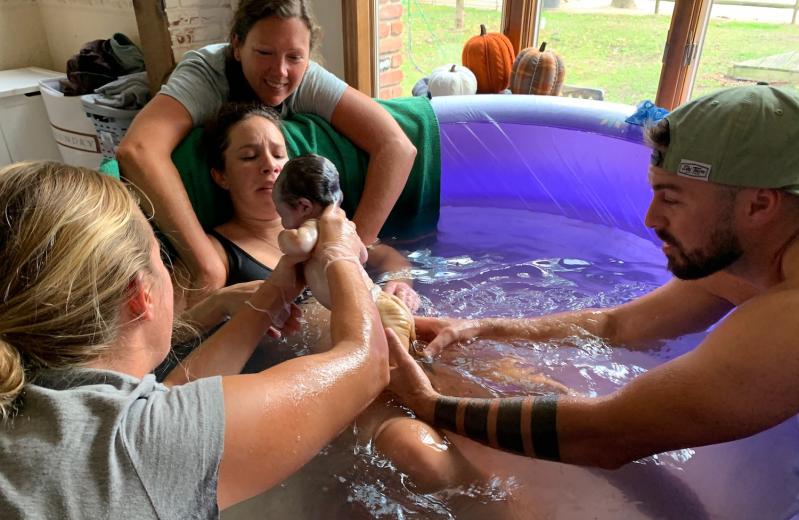 Susanna Gatz, a doula, supported Nicole Simonetti as she gave birth to Maezi Simonetti with Amanda Sini midwifing and the assistance of her husband, Michael Simonetti.
Simonetti Family
By Bella Lewis

Across the board, news is that the pandemic is the perfect time to get a puppy. Having a baby, it just so happens, is a bit more complicated.

Mothers, nurses, midwives, and doulas are bringing new meaning to "under the circumstances," Covid's particular set of which sometimes demands the exact opposite of the intimacy that is part and parcel of pregnancy and birth.

Linda DeZubiria, the nurse manager at Hamptons Gynecology and Obstetrics in Southampton, said that the maternity unit at Stony Brook Southampton Hospital has always been one on one.

"We do the best we can with P.P.E. on," she said. "We still have a very intimate experience during, but we've had to limit siblings and it's been rough, but it's the simple things -- like now we provide meals for the partner while they are here," which also helps minimize the exposure of coming and going.

In March 2020, executive orders from the governor reinforced the right of all birthing mothers to have one support person, such as a partner, with them. Wearing a mask to meet your new baby is still the norm, however, a face covering is usually not required for the one giving birth during labor. Research is inconclusive as to whether a newborn can get Covid-19, but breastfeeding is encouraged even for Covid-positive mothers.

No number of rules, however, changes Covid's unprecedented sense of the unknown, which had the phone "ringing off the hook" with concerns, said Ms. DeZubiria. In response, she sought to make things feel familiar.

Before the pandemic, tours were given to expecting couples in order for them to see the room and get the lay of the land. During Covid, safety protocols made this impossible. Instead, Ms. DeZubiria made a video with Barbara-Jo Howard, executive director of communications and marketing, in order to give people the feel of things.

"I'll be so honest with you, it eased so many concerns," said Ms. DeZubiria, laughing with relief even after the fact. "To let them see the room, to let them see we were here, and that they would not be moving through Covid areas."

Another significant adjustment for Hamptons Gynecology and Obstetrics, the primary destination for expectant parents on the East End, was reducing discharge time to accommodate parents' desire to minimize potential exposure at the hospital.

Ms. DeZubiria and Kathleen Allen, a maternity center manager, explained that the staff had developed a safe, streamlined process to get mothers out of the hospital in 24 hours after a vaginal birth, whereas before it had been 48, and for a cesarean section, previously three to four days, new moms were out in 48 hours.

"Condensed testing for pediatrics and really upping our game the second we could provide routine testing" to tick all the boxes for pediatric discharge was the big difference, said Ms. DeZubiria. "The toughest part was getting families an appointment within 24 hours at the pediatrician's," and for that, Stony Brook Southampton Hospital was grateful to East End health care providers for stepping up, too.

Another executive order issued in April 2020, "further affirmed the right of all birthing people to be accompanied by a doula in addition to their designated support person. Doulas are trained professionals who provide emotional and physical support to individuals during labor, delivery, and the immediate postpartum period. Doulas are an essential part of a birthing care team," said a letter to hospitals from the governor's office and New York State Department of Health.

The executive orders and the Department of Health also discouraged hospitals from requiring doulas to present any certification, "an example of an undue burden to doulas and their clients" when being admitted to the hospital.

Susanna Gatz of HeartShine Doula has supported mothers at Stony Brook Southampton Hospital and was the first doula to return to Stony Brook University Hospital after the executive order was issued. Before that, however, three of her clients had to give birth in the hospital without her. "I cried so much," she said about missing the experience.

In speaking about the East End families she assisted, her emotional investment was tangible, even when touch was the very thing Covid curtailed in her work. She reflected on the fact that those clients surprisingly did not FaceTime her all that much during the birth -- a text here, a call there.

The extra care she took in her prenatal visits, over Zoom or masked, seemed to go a long way, all the way to the hospital.

It was just by coincidence that Monica Kadash of Hampton Doula, who mostly works at Stony Brook Southampton Hospital, did not have any clients during the period when doulas were not allowed to attend births.

For her pandemic work in general, "I still always touched everybody in labor, social distancing went out the window. It just was necessary and I felt like a higher law was governing the process," she said, sharing the common sentiment during birth among doulas and midwives.

"If you touch someone with gloves on, it's insulting. You might as well not touch them at all," Vandy Ferrer said with a laugh. Her hands were red and dry from all the hand washing. Ms. Ferrer was one of the very first midwives to assist at Stony Brook Southampton Hospital in 2009. She has delivered 40 babies in the pandemic at the new midwifery department she co-started at Peconic Bay Medical Center in Riverhead.

Michele Liot joined Gaia Midwives, which has a Sag Harbor location coming soon, during the explosion of demand for East End home birth assistance this summer. Before that, she had worked for over a decade as a nurse in labor and delivery at Stony Brook University Hospital.

Ms. Liot is among the skilled midwives who adapted her work just as fast as Covid made the changes, which for her, included a personal one. She described herself as someone who was previously opposed to vaccinations. "I stood firmly against the flu vaccine and I finally acquiesced at the start of the year [2020] because otherwise I would have had to wear a mask at work during flu season." She paused for comedic effect, considering what became the norm directly afterward. She explained that after vaccination waiver rules changed last year, she had also gotten her kids vaccinated in order for them to be able to be physically present in school. She paused again for effect.

Danielle Mohr, who worked as a labor and delivery nurse at Stony Brook University Hospital throughout the pandemic, also labored and delivered herself this past year. "It was extremely scary being pregnant and working at the same time," she said.

After a recent miscarriage, Ms. Mohr already felt great anxiety going into the pregnancy, and the pandemic only made that more acute.

One upside was hand picking her nurses. She had to schedule induced labor because of pregnancy complications and reported that late one night at work, "I asked who was on shift the next day." Her very healthy C.J. is almost 7 months old.