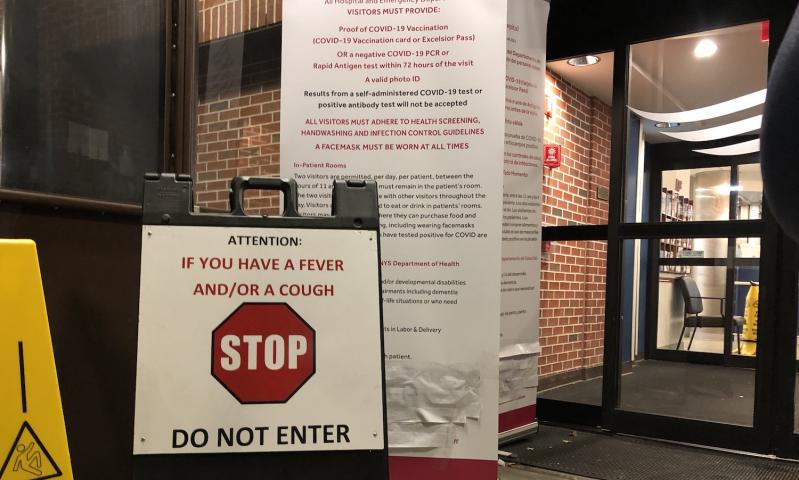 At Stony Brook Southampton Hospital, which is now prohibiting visitors in the emergency room and elsewhere with a few exceptions, there were 17 admitted Covid-19 patients on Tuesday.
Carissa Katz
By Christine Sampson and Christopher Walsh

As the highly contagious Omicron variant emerges as the dominant strain of Covid-19 infecting New Yorkers, comments from weary physicians here underscored the surprising speed with which the virus has been spreading.

"It's just all over the place; that's all," George Dempsey, medical director of East Hampton Family Medicine, said Monday.

Dr. Dempsey said his office has been testing more than 100 people per day. "They're here for testing, or they're sick," he said. "Fortunately, most of the symptoms are not severe; it's more flu-like," he said, adding that "There could also be flu going on."

Dr. Gail Schonfeld of East End Pediatrics in East Hampton reported on Tuesday that her office had given Covid tests to nearly 400 children over the past week -- and 25 percent were positive, she said, though none are severely ill. "Lots and lots of children are Covid-positive, mostly from home exposure, not school," she said, noting that this mirrors statewide and nationwide trends.

The vast majority of visitors to East Hampton Family Medicine have been vaccinated, Dr. Dempsey said. "Definitely, the vaccines made a huge difference, and the vast majority in the hospital are unvaccinated."

While symptoms among some patients at East Hampton Family Medicine are very mild, Dr. Dempsey said that this presents an additional hazard to the general population. "Symptoms can be really mild and people don't think they're positive and are still going out and about because they don't think they have it. In general, people are less cautious. If people have mild symptoms, they don't want to believe they have it."

On a more positive note, the Omicron variant "is probably going to help with herd immunity," he said, as Covid-19 infection surges throughout the population.

Until then, however, the latest surge of Covid-19 threatens to overwhelm hospitals and health care providers. "I'm hoping that after this, we'll have a break for a while," Dr. Dempsey said.

Stony Brook Southampton Hospital had 17 admitted Covid-19 patients as of Tuesday, six more than on Dec. 23.

And at Stony Brook Children's Hospital, "The big picture is, over all we are seeing many more hospitalizations -- for the most part, among patients who have not been vaccinated or have not been boosted," said Sharon Nachman, chief of the division of pediatric infectious diseases. While the number is constantly changing, there were 124 patients with Covid-19 at Stony Brook on Tuesday, she said.

Dr. Nachman was quick to emphasize that the federal Centers for Disease Control and Prevention considers those who are fully vaccinated to have received a primary vaccine series and a booster dose, "not unlike all the other vaccines we have in pediatric and adult medicine." Only those 18 and older are eligible for Moderna and Johnson and Johnson booster shots, and 16 or older for Pfizer shots, at the moment.

The dramatic increase in statewide pediatric hospitalizations reported this week holds true at Stony Brook University Hospital, Dr. Nachman said. "The children are coming in," she said. "We are seeing more of them." While children generally experience less severe symptoms of Covid-19, and the Omicron variant seems to cause milder illness, Dr. Nachman said the increase in infection among children is nonetheless a concern. The severity of illness in children is "perhaps less so, but particularly among those with co-morbidities who are not vaccinated, we are seeing severe disease." The same holds true for unvaccinated children, she said.

With New Year's Eve approaching, "this will be the time to consider how to stay healthy," Dr. Nachman said. "I think it's important to remind people that masking does work, especially now, when we are more indoors than out, and around people whose status we don't know. It's important to protect yourself and your family, and masking will work to do so."

Among the parents whose children are patients of Dr. Schonfeld's practice, about a third of them have concerns about the Covid vaccines but "are coming around one by one," she said. Another third, "are not willing to discuss it." Children 5 to 11 have been eligible for the Pfizer Covid-19 vaccine since Nov. 3; children 12 to 16 have been eligible since the spring.

"I think they have concerns and that they need to be addressed by someone they trust. I tell them I'm here when they want to talk about it," Dr. Schonfeld said. If they think that "I'm part of a giant conspiracy, they're not going to want to hear what I have to say, but most people know I care about children and I'm not in it to make money."

The lingering fear, mistrust, and misinformation are "difficult things to get past," she said. "It's a very polarizing issue."