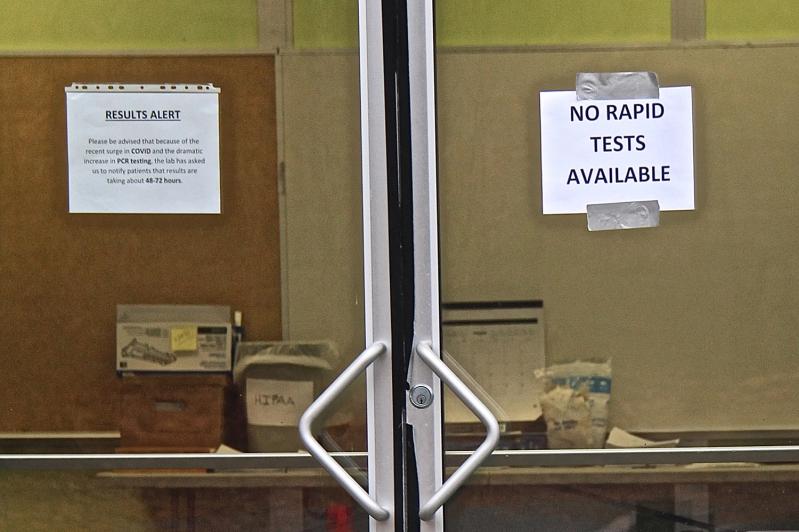 Signs on the door at the East Hampton Town Center for Humanity, where the town moved its Covid testing as of Monday, advised people on Monday that rapid tests had run out and that, due to high demand, wait time for test results could be two to three days.
Durell Godfrey
By Christine Sampson, Christopher Walsh, and Christopher Gangemi

On the South Fork, in Suffolk County, and in New York State, Covid-19 numbers are on the rise again as government officials and other leaders weigh rules, policies, and actions meant to prevent a backward slide in the fight against the virus.

If there’s any doubt that people are concerned, one need only drive by East Hampton Town’s Covid testing site, now at its Center for Humanity on Stephen Hand’s Path. The facility ran out of tests and closed early on Tuesday, and yesterday morning, the line of people waiting for tests was 50 cars long.

Despite “significant progress” in vaccinating residents, “we are once again witnessing an enormous surge taking place,” said Suffolk County Executive Steve Bellone, who on Tuesday repeatedly urged “common-sense measures” to protect oneself and family members as the Christmas and New Year holidays approach. The current rate of infection surpasses the 12.8-percent rate measured on Dec. 29, 2020, he said during a press conference.

“This 13.6 number is the highest we’ve seen since the early days of the pandemic. The Omicron variant is without question powering a surge in cases here.”

“The good news,” Mr. Bellone said, is that “we have over 90 percent of adults vaccinated here now,” referring to those who have had two doses of the Pfizer or Moderna vaccines, or a single shot of the Johnson and Johnson vaccine. “But we know the booster shot is the best protection that you can have.” The percentage of those who have received a booster remains relatively low, he said, though demand is growing.

Anecdotally, reports of long wait times for vaccines and boosters locally have surfaced on social media even as health care experts extol their importance.

Dr. Fredric Weinbaum, chief medical and operating officer of Stony Brook Southampton Hospital, urged people 5 and older who are not vaccinated to be vaccinated and urged those eligible for boosters to get them. “Vaccinations are our best shot at protecting ourselves, loved ones, and community. If Covid is contracted, vaccines help to reduce the severity of symptoms and hospitalizations,” he said in a statement

The number of Covid patients hospitalized at Stony Brook Southampton Hospital remained at 11 on Tuesday, as it was on the Tuesday prior.

Another vaccine question is whether “fully vaccinated” status will soon need to include having a booster shot. Jeff Nichols, superintendent of the Sag Harbor School District, predicted on Monday that the federal Centers for Disease Control will likely take that step soon. He pointed to recent studies and international data that have shown mRNA vaccines (meaning the Pfizer and Moderna vaccines) ward off the Omicron variant to a much lesser extent than they did the Delta variant — from over 90 percent protection down to 30 to 40 percent protection, but that the overall risk of serious infection rises to at least 70 percent when boosters come into play.

“The scientists who are studying this really don’t know how it’s going to play out. . . . The C.D.C. is likely, within the next week or two, to redefine ‘fully vaccinated’ “ as having three shots of Pfizer or Moderna and a Johnson and Johnson shot plus a booster, Mr. Nichols said.

The East Hampton Town Police Department dispatched officers twice within the last week to check whether businesses were complying with the statewide mask mandate that went into effect on Dec. 13. According to official reports, the manager of Villa Italian Specialties was warned last Thursday that fines could be imposed if the mask rules weren’t being followed, but on Saturday, when police were called to Goldberg’s Bagels on Pantigo Road, everyone there was found to be masked as required.

Some restaurant owners have found themselves pleasantly surprised that customers are responding positively to mask mandates, which are required of diners whenever they are not eating at their tables.

“I expected more pushback, but the mandate hasn’t been an issue for us,” Jennifer Di Pretoro, a manager at Tutto il Giorno in Sag Harbor, said in a message to The Star this week. “Guests have been very cooperative and understanding of it, possibly because many of them have already been conditioned to it in the city.”

“We never really stopped masking the staff at the restaurant, so it wasn’t that big of a change,” she continued. “We’re just reinforcing the message now.” However, the restaurant has been forced to cancel some events because of the recent spike in Covid rates.

Eric Lemonides, an owner and general manager of Almond restaurant and L&W market in Bridgehampton, said of the new mask mandate, “People love it, dude. People are totally into it.”

He said the mask mandate, as far as retail goes, is becoming the norm. “You walk into a store, you put on your mask. You walk out, you take it off. I don’t think anyone cares anymore.”

At one of the worst times of year for a store to confront Covid, BookHampton announced on Instagram that it is closed to in-person shopping this week “out of the utmost caution” after an employee tested positive, but the shop has gotten creative with online options and phone orders.

Heading into the holiday break, schools in East Hampton, Springs, Sag Harbor, and Bridgehampton were sending students home with Chromebook computers as a precaution, just in case the spike in infections continues past New Year’s Day and makes in-person classes too risky. But administrators, including Adam Fine, superintendent of the East Hampton School District, said a return to remote learning will be avoided at all costs.

“We will continue to monitor cases, but have no plans to shift to remote learning at this point,” he said in an email to families. “If numbers increase as they did in some nearby districts, we are of course ready to pivot to remote learning. This is a last-resort option.”

On Tuesday alone, three East Hampton High School students tested positive for Covid-19, bringing the district’s total number of cases to 86 since September. About 13 months ago, before the winter 2020 spike, the East Hampton School District had 29 cases. Cases are tracked on a state database called the School Covid Report Card.

The Ross School is now requiring students ages 12 and up to be vaccinated. “Mandating vaccinations allows us to return to the cafe, offer athletic programs, and teach our electives in person and with mixed age groups,” the private school said on its website. “We want all of our students to return to a more normal educational environment.”

Gov. Kathy Hochul has suggested that a school vaccine mandate could be on the horizon by the fall of 2022. “I believe this is important. . . . It’s absolutely something we’re looking at very seriously,” she said in an interview on MSNBC last week.

East Hampton Town Councilwoman Kathee Burke-Gonzalez said on Tuesday that the town had suspended in-person senior citizens services through Jan. 14, 2022. These included the nutrition programs and activities at the town’s senior citizens center in East Hampton and at the Montauk Playhouse.

Ms. Burke-Gonzalez said that an average of around 40 residents visiting the senior citizens center each day had dwindled to 25. When senior citizens were informed of the suspended service on Tuesday morning, “they said they’d expected the call,” she said, “and many were already considering staying home because of the high positive rate on Long Island and in East Hampton.” The town will continue to transport senior citizens to medical appointments, she said.

A statewide moratorium on utility shutoffs for customers who are behind on payments expired on Tuesday. The Suffolk County Water Authority is offering payment plans and encouraging people to sign up for assistance programs. Details can be found online at scwa.com. New York State also continues to offer help paying for rent, heating bills, and food, with Governor Hochul announcing on Tuesday that New York has received an extra $230 million from the federal government for supplemental nutrition assistance, commonly known as food stamps. Information on these types of programs can be found at ny.gov.