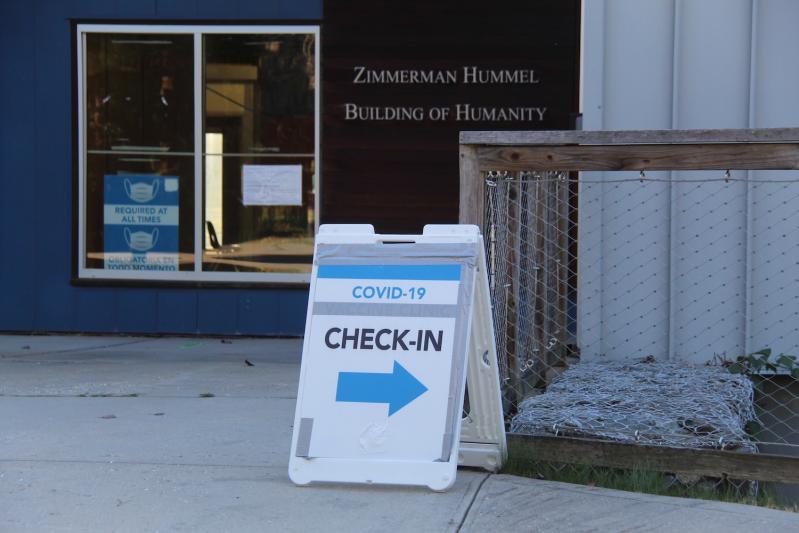 CareONE Concierge, which is operating a test site for East Hampton Town at the former Child Development Center of the Hamptons on Stephen Hand's Path, reported that the positive test rate there was 5.16 percent between Nov. 8 and Saturday.
Durell God
By Christopher Walsh

"I am concerned," Gov. Kathy Hochul said on Tuesday, though her demeanor while delivering remarks in Buffalo suggested irritation and frustration as she urged New Yorkers to get a Covid-19 vaccine if they have not already done so, or a booster dose if they feel at high risk for a breakthrough infection. "I am here because I'm personally deeply concerned about the rate of infection," she said, and not just in western New York, where the seven-day average positive infection rate reached 8.52 percent on Monday.

As the weather grows colder, Covid-19 is once again on the upswing in New York, including in East Hampton Town and across Suffolk County, and health care professionals are pleading with the public to remain vigilant and, yes, get vaccinated if they have not yet done so.

For three weeks, CareONE Concierge, which is operating a test site for East Hampton Town at the former Child Development Center of the Hamptons on Stephen Hand's Path, showed a small but steady decline in the rate of positive tests. Last week, Supervisor Peter Van Scoyoc reported that the positive rate had been 5.88 percent among those tested between Oct. 16 and Oct. 23, had fallen to 4.94 percent between Oct. 24 and Oct. 30, and to 3.85 percent between Nov. 1 and Nov. 7.

But the rate rose to 5.16 percent among 155 people tested between Nov. 8 and Saturday, Jason Cavolina, CareONE Concierge's vice president of clinical operations, said Monday. The town had logged 2,197 cases of Covid-19 as of Tuesday, according to Suffolk County's Information Technology Department, an increase of 20 in the past seven days.

Dropping temperatures, nearly two months into fall, coincide with a worrisome development in the course of the pandemic. On the plus side, "There's a very, very high prevalence of the highest risk patients being fully vaccinated in our East End ZIP codes," Fredric Weinbaum, Stony Brook Southampton Hospital's chief medical officer, said on Tuesday. "Well over 90 percent of people over 65 are fully vaccinated." However, Dr. Weinbaum said, "many of them were the earliest to be vaccinated. That efficacy is waning. We are seeing breakthrough infections in patients admitted to the hospital." Given the prevalence of vaccination on the South Fork, some are asymptomatic and hospitalized for another condition, he said.

A growing body of data indicates that the vaccines' efficacy "does begin to wane at six months and more after the second dose" of the Pfizer-BioNTech and Moderna vaccines, and after the single-dose Johnson and Johnson vaccine, he said. Where they were as much as 95 percent effective in preventing hospitalization and/or death, protection against infection falls to around 70 percent, he said, though protection against hospitalization and/or death remains around 90 percent. "If you can increase the efficacy from 70 to over 90 percent by getting a booster, wouldn't you do it?"

Booster shots were initially recommended for those over 65, immunocompromised, or otherwise at high risk. But calls to make all adults eligible for a booster have grown in recent weeks. "I don't think it will be long before the recommendation will come out that everyone who is six months or more from a second dose [of the Pfizer-BioNTech or Moderna vaccine] should have a booster," Dr. Weinbaum said. The Centers for Disease Control already recommends that anyone vaccinated with the Johnson and Johnson vaccine more than two months ago get a booster, regardless of their age or underlying conditions.

The New York Times reported that the federal Food and Drug Administration plans to authorize booster doses of the Pfizer-BioNTech vaccine for all adults as soon as today. Pending the outcome of a meeting of federal Centers for Disease Control and Prevention vaccine experts tomorrow, those who received a second dose of that vaccine at least six months earlier could receive a booster dose as soon as this weekend.

"The one thing that remains relatively hard and fast is the timing has to be correct, Dr. Weinbaum said. "You don't want to get the booster before you need it." The nature of one's employment, such as exposure to the public, risk factors related to overall health, age, "and your health care team can tell you if you're at high risk," he said.

But if it has been six months since a second dose of the Pfizer-BioNTech or Moderna vaccine, he advised that "anyone eligible for a booster get it." He has done so, he said, and "it is one of the best feelings I know. It's an extra layer of protection that puts you back in the more-than-90-percent protection range."

On Monday, the governor encouraged "all New Yorkers who live or work in a high-risk setting to get the booster," as she has done.

Mr. Van Scoyoc said on Tuesday that CareONE Concierge has taken occupancy of the trailer at the back of the Town Hall parking lot and was to begin offering Covid-19 tests there yesterday. Hours are 7 a.m. to 5 p.m. on Monday and Wednesday, 10 a.m. to 6 p.m. on Tuesday and Thursday, and 10 a.m. to 2 p.m. on Saturday. Another testing site, at the Montauk Playhouse, is expected soon to commence operation on Fridays from 9 a.m. to 6 p.m., he said.

Hopes soared in the spring, as vaccines became available to more and more adults and pandemic protocols were lifted, but the outlook is decidedly less cheerful today. "For the foreseeable future," Dr. Weinbaum said, "I would not be surprised, and I suspect what will be the case, much like influenza, is we'll have to be taking a yearly booster shot for this. And we'll learn to live with it as we do influenza."

Therapeutics, preliminary studies of which are very promising, will also help, he said, and may soon receive emergency-use authorization. "The combination of boosters and therapeutics renders Covid-19 into an endemic, sporadic disease for which we have good treatments and good preventions," he said. The current push to vaccinate children is also helping, "and now we're working with school districts, pediatricians' offices, and pharmacies to get the 5-to-11 group vaccinated."

East End Pediatrics in East Hampton was to have vaccinated some 300 children during a clinic for its patients last Saturday and the Springs School is holding a clinic for district children 5 to 11 on Saturday from 10 a.m. and 1:45 p.m. More details can be found in a separate story in today's paper

"We're dealing with a very, very highly contagious variant, the Delta," Dr. Weinbaum said. "Virtually all the cases now being identified are some subtype of the Delta variant." The more people vaccinated, "the smaller the reservoir of potential infected cases, the less likely to see infection in our most vulnerable population."

But until that reservoir has evaporated, he said, "that is what enables the virus to mutate and vary."