Visitors will not be permitted to leave footwear at road ends, a common practice in past years. 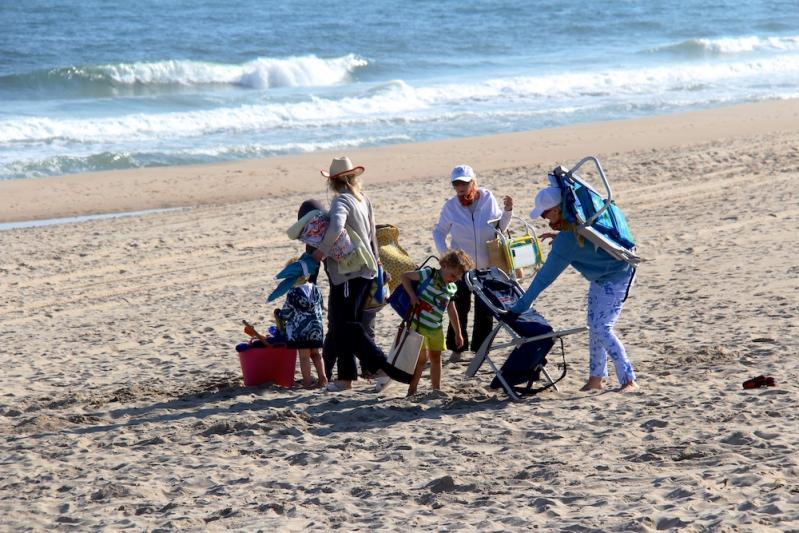 “We are prepared. We’re ready for summer.”

That was the message from John Ryan Jr., East Hampton Town’s chief lifeguard, as the town board announced on Tuesday the recommendations and protocols for a phased opening of beaches, parks, and other recreation areas as developed by an advisory group comprising multiple town departments as well as advisers including Dr. Bruce Polsky, an infectious disease specialist whom the board named as a consultant.

On the recommendation of the advisory committee, four ocean beaches will open on Saturday during lifeguarded hours of 9 a.m. to 5 p.m. They are Indian Wells and Atlantic Avenue in Amagansett, and South Edison and Ditch Plain in Montauk. For the time being they will be open on weekends only, and only to those who have beach permits. No daily parking passes will be sold. Parking at Indian Wells is by resident permit only.

“We’re going to flood these areas with as many town employees as we can,” Town Police Chief Michael Sarlo said, from a Parks and Recreation Department employee at the attended booth on Indian Wells Highway, for example, to a traffic control officer in the parking lot, and a Recreation Department employee ushering people on and off the beach, ensuring that face coverings are worn, and reminding beachgoers to maintain distance from one another. Staff will monitor comfort stations and food vendors to preclude inadvertent gatherings, the chief said.

Lifeguards will be ready to serve in capacities beyond their normal duties to help manage public awareness and patrols at locations and entrances beyond the bathing beaches. The scope of their work could be adapted to include overseeing crowd control and compliance with social distancing at comfort stations. Lifeguards are also empowered to use trucks and all-terrain vehicles to assist in providing backup and relief to guards in remote areas. A chain of command is to be used to communicate among lifeguards, Marine Patrol, police, and town officials.

Bay beaches — Big Albert’s Landing in Amagansett, Maidstone in Springs — as well as Gin Beach, on Block Island Sound in Montauk, and the ocean beach along “Motel Row,” from Kirk Park to South Edison in downtown Montauk, are to open on June 20.

These are subject to change as needed or as determined to be in line with coordinated regional openings, according to a PowerPoint presentation given during the board’s meeting.

To limit the number of people at its beaches, East Hampton Village is using barricades to reduce the number of parking spaces, and it will not be issuing daily parking passes. The deck of the Main Beach pavilion will be closed, but beachgoers will have access to the concession stand, restrooms, and locker room. Attendants will monitor the facilities, as well as the restrooms at Georgica and Two Mile Hollow beaches to make sure that people are either maintaining six feet of social distance or wearing a mask, Mayor Richard Lawler said on Tuesday. In accordance with state guidelines, the concession stand will offer only food and not merchandise such as beach chairs.

At the entrance to Havens Beach in Sag Harbor Village, a sign in English and Spanish will tell people that social distancing must be observed, and masks worn in common areas, said Aidan Corish, a village board member. People who are not following the rules will be asked to do so by a lifeguard on duty, and if they refuse, lifeguards have been instructed to call the police.

The village will monitor the beach for overcrowding, and will block off sections of the parking lot if necessary, Mr. Corish said. The bathroom will remain open, and picnic tables will be reserved for families only.

At East Hampton Town beaches, procedures developed for safe rescue will be focused on maintaining distance when possible. Lifeguards have received training specific to Covid-19 infection as well as their typical training, Mr. Ryan said, to protect themselves as well as beachgoers. “It’s a lot of hands-off,” he said of new lifesaving procedures. Those being rescued at a town beach often “don’t even realize they’re in trouble by the time we get to them,” he said. “When you’re dealing with a rescue with an individual not in a panicked state, we have the ability to assist them without actually putting our hands on them. . . . We’re teaching lifeguards how to make rescues without being hands-on,” including pulling bathers to safety with rope lines. On the beach, “If we have to get hands-on, we have masks, face shields, gloves.” Each lifeguard stand will feature a hand-washing station, soap, and hand sanitizer.

Initially, beaches will have one lifeguard stand, Mr. Ryan said, and beachgoers will be asked to spread out 25 yards to the east and west from it. “We don’t want to pack everyone in that area, but that 50 yards has a maximum capacity of 250 people,” he said. Lifeguards protect people beyond that area, he said, but the emphasis will be on spreading beachgoers out and limiting capacity.

Instead of two lifeguard stands, seven or eight lifeguards will rotate shifts on the stand, the others walking the beach, reminding people to maintain distance, Chief Sarlo said. A police officer will patrol the beach between Indian Wells and Atlantic Avenue on an all-terrain vehicle.

On the beach, all individuals not in a family unit will be required to remain at least six feet apart. Everyone must wear a face covering in parking areas, comfort stations, and wherever a six-foot distance cannot be maintained. Group gatherings and contact sports are prohibited, and no sunbathing will be permitted within a 20-foot distance south of the beach grass line, to provide a path for travel for enforcement personnel and egress from the beach.

Where possible, the entrance and exit to the beach will be separated to provide a safe flow of foot traffic. The west, or right side of an ocean beach will be for entry, the east or left side for exit. Where it is not possible, signs will delineate the entry and egress points. New signs will be installed.

Beachgoers will not be permitted to leave footwear at road ends, a common practice in past years.

Severo Kristofich of the town’s Building and Grounds Department said that cleaning staff is second only to emergency medical personnel in susceptibility to exposure to the coronavirus. Comfort stations will be open only during the hours listed on a sign outside of them. Workers will use personal protective equipment, and an antiviral disinfectant, which must be left on surfaces for five minutes. Facilities will be entirely sanitized multiple times per day, and will be closed to the public, for up to 30 minutes, during cleanings. The town is exploring the hiring of an outside contractor for additional cleaning.

Social distancing must be maintained while people are on line at comfort stations, face coverings will be required by those using them, only one person may occupy them at a time, and hand washing for 20 seconds before and after using the facility will be required. Mr. Kristofich appealed to the public to be respectful of cleaning staff. “We’re doing this for your safety,” he said.

Nonresident beach parking permits will not be issued until further notice. The number of parking spaces at town beaches will be reduced, and no-parking signs will be installed along unrestricted streets in downtown Montauk.

The committee will reconvene after the weekend and on a biweekly basis, or as needed thereafter, to discuss lifeguarded beach protocols in response to the previous week’s findings. “This is going to be a huge learning curve for us,” said John Rooney, the superintendent of recreation, “how to adjust on Sunday from Saturday, and on Monday from Sunday. And next week, all agencies and departments get together. We will talk through the weekend, and from Tuesday think about the next weekend.” The department is “starting from scratch in a lot of ways, but we have thought through a lot as well.”

Enforcement will be a coordinated effort among the Police Department, Marine Patrol, Ordinance Enforcement, lifeguards, and recreation staff.

Mr. Ryan acknowledged that the protocols to be implemented during a public health crisis not experienced in the last century were “a work in progress,” and a degree of uncertainty is inevitable. “But for the most part, we’re ready,” he said. This will be his 39th season working for the town as a lifeguard. “This is going be a summer like no other,” he said.

Lifeguards understand that their job is to facilitate public safety, not just in the water but also in the parking lot and on the beach. “There will be people who don’t agree with this,” he predicted of beachgoers. Lifeguards know that they will have to spend time communicating with the public more than in past years, and “reaching out past where they normally would.”

In East Hampton, Supervisor Peter Van Scoyoc referred to “a slow, soft reopening” this weekend, a procedure that every community on Long Island is following. “We’re not going all the way in,” he said. “We don’t want to get in over our heads.”

“In a way, this is a test for every community on Long Island, the whole Mid-Atlantic region,” he said. “We’re going to learn a lot about how the public is going to respond.” Adjustments will likely be necessary, but attendance at the beaches may be greatly reduced out of safety concerns. “We will have to be ready to respond.”