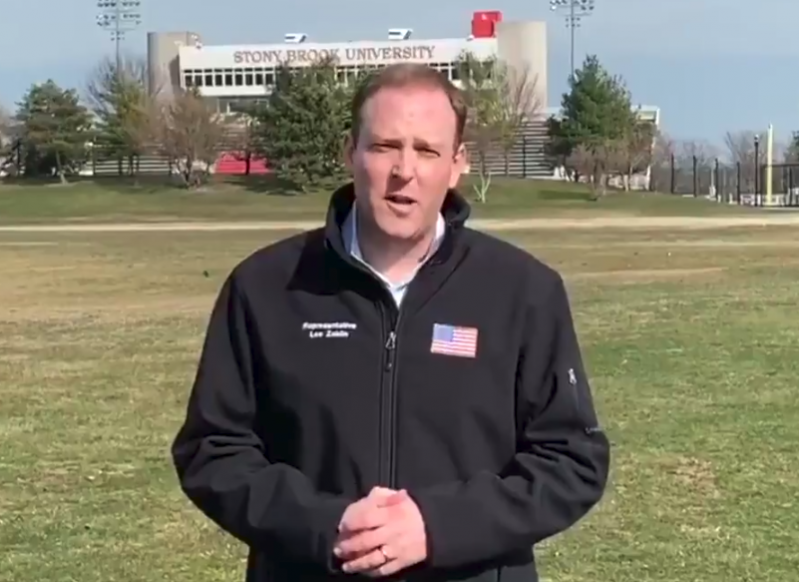 Update, 5:50 a.m., April 6: Speaking at the White House on Sunday evening, President Trump said 200,000 N95 masks would be sent immediately to Suffolk County. "Getting that out on an emergency basis. Should be there tomorrow," the president said. Representative Lee Zeldin's office said the masks would be provided at no cost.

Representative Lee Zeldin has established himself as a liaison between Suffolk County and the White House by speaking directly to Jared Kushner, the son-in-law of and senior adviser to President Donald J. Trump, about Suffolk's needs as one of the country's Covid-19 hot spots.

Suffolk Executive Steve Bellone said he was grateful for the connection to Washington.

Speaking on Sunday afternoon, Mr. Bellone said Mr. Zeldin helped secure a contract for 150,000 surgical masks to arrive in the county by Monday, with more supplies and equipment likely to be available. The masks were delivered on Sunday.

"Two days ago, I had a conversation with one of our representatives, Congressman Lee Zeldin, and he expressed his support for Suffolk County and what we are doing here," Mr. Bellone said. "We had a very good conversation. Congressman Zeldin has worked with the White House and secured a commitment that they will work to make sure Suffolk County has what we need in the next 30 days as we go through this crisis. . . . Knowing that Rep. Zeldin has that commitment from the White House, that is a significant thing for the people of Suffolk County."

Mr. Zeldin quickly took to Twitter to plead for supplies.

The announcement came immediately following a report that there had been 47 Covid-19 deaths in the county since Saturday, bringing the total number of deaths in Suffolk to 175. Mr. Bellone said the county is going to change its reporting of fatalities to more closely reflect how the state is handling reporting, meaning the specific level of detail previously provided to the public will no longer be shared.

According to a Suffolk County Geographical Information Services map, there were more than 13,000 confirmed Covid-19 cases in the county as of Sunday afternoon. Fifty-six of those cases were in East Hampton Town and 191 in Southampton, increases of 7 and 10, respectively, in those towns since Saturday. Statewide, there were more than 122,000 confirmed cases as of Sunday.

Mr. Zeldin said in a statement, "I thank the administration for their quick response to my direct plea on behalf of my constituents. As I have remained throughout this outbreak, I will stay directly in touch with every level of government, local hospitals and health care facilities, and others in elevating their specific requests to the highest levels of the administration. . . . When it comes to fighting the ongoing outbreak of coronavirus, we are one team and this is one fight."

On Saturday, Mr. Bellone had said that the county's stockpile of masks and other personal protective equipment had dwindled to zero.

On Sunday, Gov. Andrew M. Cuomo said 1,000 additional health care professionals, including doctors, nurses, respiratory technicians, and therapists, are being sent to the state by the federal government to provide some relief for overwhelmed hospital systems. Hundreds arrived in New York City on Sunday.

Governor Cuomo declared that unused ventilators from upstate and western New York will be reallocated downstate, where they are urgently needed. The equipment would then again be sent elsewhere in the state when the influx of seriously ill patients on Long Island began to subside. In response, several elected officials from upstate and western New York railed against the decision.

"Cases and deaths are increasing today in western New York. Multiple intubations are occurring regularly," Representative Tom Reed of New York's 23rd Congressional District said on Twitter. "We have to protect all New Yorkers, including upstate. The governor said he was sending the National Guard to take our ventilators and P.P.E. by force. That doesn't sound like a request or working together. That sounds like force. Once we lose these ventilators they are never coming back."

Mr. Bellone on Sunday implored Mr. Reed and others to clarify what they meant by their critical responses to Governor Cuomo. "We are one New York, and we are one nation. . . . This is about humanity," Mr. Bellone said. "I am certain that they do not mean that ventilators that are not being used in upstate New York now or in the immediate future should not be used to help save lives on Long Island and downstate. I am certain that is not what they meant, because that would be inhumane." He pledged to return the ventilators sent here when Suffolk's virus apex has passed.

Free Car Seat Checks in Southampton
Battle of the Books, and More Fun for Teens
This Week's Happenings in Montauk
END_OF_DOCUMENT_TOKEN_TO_BE_REPLACED