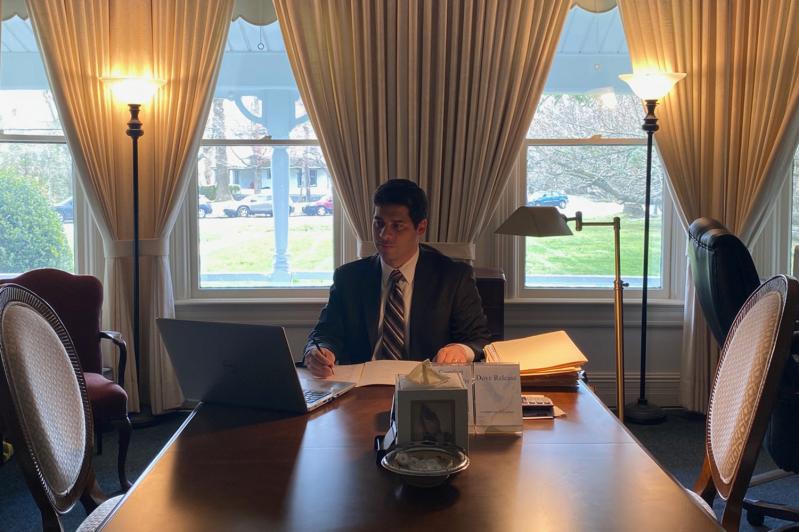 Dominick Abbate, an owner of Brockett Funeral Home in Southampton, said it is heartbreaking that grieving families cannot gather and console each other in the way they normally would have before the coronavirus outbreak.
Christine Abbate
By Taylor K. Vecsey

As Rudolph Rando’s daughter prepared for his services in the days after his death last week, she had to be firm with his 90-year-old brother.

"I kept telling him, Bob, you can’t come. You can’t come. It’s not worth the risk," Laurie Kenny told her uncle, who because of his age is among the most vulnerable to Covid-19. "On Thursday, go to Fort Hill Cemetery in Montauk and go to his grave," she said.

As a nurse on Staten Island, she knew she could not relent. "I wouldn’t have forgiven myself" if something happened to him, she said.

Religious traditions and customary burials have been upended by the prohibition on gatherings as the coronavirus continues to spread. While the dead must still be buried, loved ones are somewhat stifled in their grief without being able to mourn as they normally would.

Mr. Rando, 92, died of sepsis not related to Covid-19 on March 22. Ms. Kenny said she was grateful to be with her father when he died at San Simeon on the Sound in Greenport, where he had lived for the last three years, stricken by Alzheimer’s disease.

Initially, she was not allowed in, but pleaded so that she could make treatment decisions. A staff member asked her by phone if she would be happy with 10 minutes. "I said, ‘I will be happy with two minutes.’"

Three days after he died, his wife, his children, and his grandchildren gathered for a viewing at the Yardley and Pino Funeral Home in East Hampton. There were no other visitors in the carefully Cloroxed funeral home. Had her father died under normal circumstances, his daughter is sure "half of Montauk" would have been in attendance.

There could be no Mass; the churches are shuttered. A priest did attend the burial to offer a prayer. Taps was played, as her father was a Navy veteran, but there was no formal military service. His son, who was in the Army, gave his father a final salute.

Even family members kept six feet apart as they said their goodbyes. "My son made an exception. He didn’t care. He had to hug me. My brother too," Ms. Kenny said. "You don’t realize until you can’t have them how much a hug does for you."

Rabbi Daniel Geffen, who leads Temple Adas Israel in Sag Harbor, said one of the challenging aspects the current situation presents is the distance clergy must keep when grieving families need them the most. "It’s the itch in the back of your head saying, I should be doing something right now and I can’t do it," he said, adding that, instead, clergy have to use the tools they have "to mimic what we were intending to do by the physical."

The Rev. Jim Erwin, who took over at St. Ann’s Episcopal Church in Bridgehampton at the start of this year, has been counseling the family of a man in his 90s who died in his sleep last week. He spoke to the widow and adult children, but cannot physically be with them. "They themselves are being forced to be apart as well," he said.

The family has used Zoom, a video conferencing platform, as a way to gather together, share their grief, and trade memories. A nephew "Zoomed in" on one chat and held up old photographs of his uncle for all to see.

The family hopes to have a memorial service sometime this summer, but Father Erwin said not being able to have the services they normally would can leave a lasting effect. "That’s a milestone. The grieving process looks to the funeral as a marker — now we can start to turn from that fresh grief to that little more distant grief in a way," he said.

The question remains now: "What are the markers for us to move us through our grief? People are just stuck in that place of that early grief without all the hallmarks. My role with this one family is to help them move in that process."Like clergy, funeral directors also have been forced to adapt in the midst of the pandemic. Dominick Abbate, an owner at Brockett Funeral Home in Southampton, said he is busier than usual because of the virus, and the health crisis means families are deprived of the traditional funerals and burial customs. "We are trying to adapt as best we can."

He is making arrangements with families by smartphone instead of in person, sending photographs of casket options and necessary documents for e-signatures.

With strict guidelines, those who still wish to have a wake must hold it outside, behind the funeral home in the garden. The building itself has been closed off. "I never thought in my career we’d be doing a viewing with a casket outside," Mr. Abbate said. A staff member ensures that only a few people at a time can leave their cars to go up to the casket.Brockett’s is also using technology to connect those who cannot be there. Graveside services are being recorded and streamed privately for family members who could not travel or because, in some cases, the whole family is in quartine. "To see that they are not being able to say goodbye and have that moment of peace and grieving, it’s tragic, it really is," Mr. Abbate said. "It’s absolutely heartbreaking — to see everybody in masks and gloves and they can’t give each other a hug."

"You like to be there for families and give them a handshake and touch their hand. Now, you have to take a step back."

Some have considered putting off burial entirely, but most "make peace with the process that we need to have their loved one brought to their place of rest."

Each cemetery is developing its own policies, according to Mr. Abbate. Some are allowing only a certain number of funerals per day. The number of those gathering is restricted to 10 at some gravesides, while certain cemeteries are having mourners stay in their cars and watch the casket get lowered from afar.

As Rabbi Geffen prepared for a small graveside service for a member of his congregation, he spoke of Levayat Ha’Met, accompanying the dead to burial, one of the most important mitzvahs in the Jewish faith. "Most of us sort of tend to prioritize the funeral service, in a sanctuary or a funeral home. The actual accompanying the body to the graveside and participating actively in the burial of the body itself, traditionally speaking, we’re supposed to do that entirely on our own."

The funeral component is the easier of the two to accommodate in a creative sense, through Zoom. "The burial part is the biggest struggle," he said.

Burial in the Jewish faith, as in Islam, is supposed to take place quickly. As a Reform Jewish rabbi, he said he tries to adhere as closely to the tradition as possible.

But, he said, it is important to remember that one concept that overrides every commandment is, in Hebrew, pikuach nefesh, which means "saving a life," the Jewish law that the preservation of human life takes precedence over any other religious rules. "In the traditional sense of religious thinking, our lives are a gift from God," he said.

A leading Orthodox rabbi in Europe ruled that cremations, usually not embraced by Orthodox Jews, should be considered a posthumous mitzvah. Some countries have stopped burials out of fear they increase transmission of the virus and have moved toward cremation instead.

"If you really study Jewish history and Jewish theology," Rabbi Geffen said, "there is a tremendous amount of adaptation or even evolution — if that’s the right word — over time due to changes in the environment and thought." It is important to find the balance between maintaining traditions and circumstances that dictate change.

For example, sitting shiva, the weeklong mourning period for Jews, is another ritual that cannot take place, at least not in the traditional sense. People are using Zoom as a way to comfort those in mourning — the true singular focus of shiva, Rabbi Geffen said. "They really want to make sure the grieving family knows they are there in support, even from a distance."

"Sometimes the most helpful thing that you can do is simply be present while someone loses themselves in their grief," he said.

Rabbi Geffen wonders if in the end an important lesson will be extrapolated from the inability to perform the usual rituals, no matter the religion. "When you strip away the choreography of them, we are really focusing on the real purpose of all of this stuff."

East Hampton Samples Are a Crucial Contributor to Lyme Test
Ready to Adopt a Pet? ARF Is Ready, Too
Guild Hall's Curator Visiting Studios Virtually Through June
Seeking Stories and Images From the Time of Covid
END_OF_DOCUMENT_TOKEN_TO_BE_REPLACED