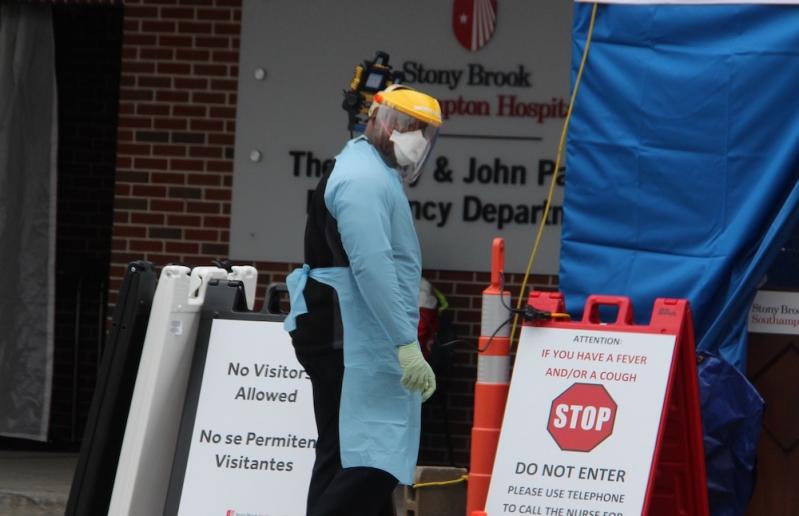 Hospitals across the state have been directed to double their capacity as the state anticipates a surge of new COVID-19 patients requiring hospitalization.
Durell Godfrey and Holger Winenga Photos
By Christine Sampson

Confirmed cases of COVID-19 in Suffolk County rose to 1,880 on Tuesday, as the county executive reported more virus-related deaths for the sixth day in a row and officials scrambled to increase the number of hospital beds across the region.

"Our role, for those who are not on the front lines, is to do everything we can to not transmit this virus," Steve Bellone, the county executive, said in his daily press briefing on Tuesday.

East Hampton now has 12 confirmed patients; two of them are East Hampton Village residents, Mayor Rick Lawler said Monday. There are 24 Southampton patients, 33 in Riverhead, 104 in Southold, and 2 from Shelter Island. The towns of 110 more patients have not been released, according to the county.

Of the confirmed cases, about 8.7 percent, or 163 people, are hospitalized across the county. Fifty are in intensive care units.

More than 7,000 people have been tested. Seventeen people have died of COVID-19 in Suffolk County, Mr. Bellone said Tuesday afternoon, though many also had underlying illnesses. Five of those who died were residents of the Peconic Landing retirement community in Greenport, the Suffolk Times reported.

The news comes as local hospitals, including Stony Brook Southampton Hospital, rush to comply with Governor Cuomo's mandate to increase hospital capacity by more than 100 percent across the state. But there is still a shortage of staff and equipment. Mr. Bellone said the 25 new ventilators coming soon to Stony Brook University Hospital are going to be "woefully inadequate" when COVID-19 cases peak.

He could not say how many virus cases Suffolk County is projected to have over the coming weeks, but called the hospitals' directive "a herculean task" and said the county is doing everything it can to support them.

"Everything we can do to reduce the transmission over the next few weeks is going to help our hospitals and healthcare system that in many ways we take for granted," Mr. Bellone said.

He and Geraldine Hart, the commissioner of the Suffolk County Police Department, said officers and public officials are authorized to break up groups of people they see congregating in public. Ms. Hart said a number of ordinances support that action, among them disorderly conduct, criminal nuisance, and unlawful assembly.

"If you are not an essential employee, there are no gatherings of any size," Mr. Bellone said. "The police can enforce that. They will enforce that."