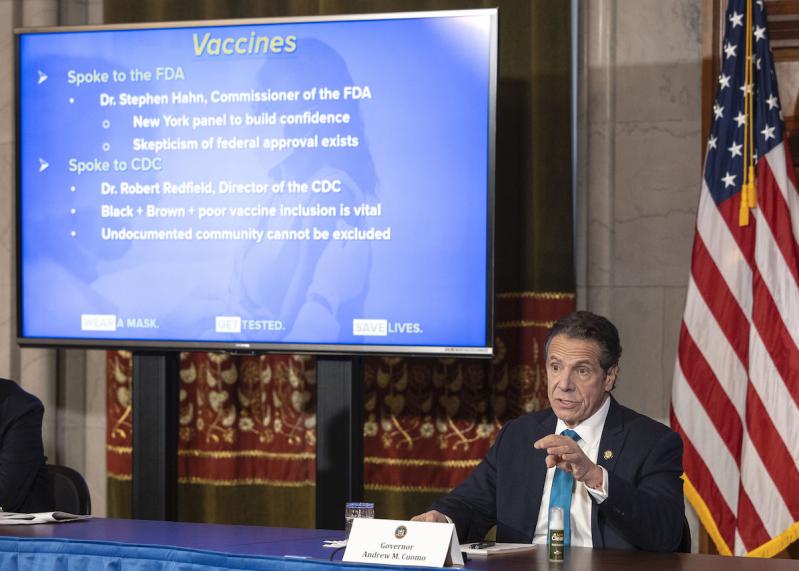 In a letter to the federal Health and Human Services Department, Governor Cuomo said the plans he has seen thus far are discriminatory because they exclude funding and provisions for outreach to minority communities and poor communities. Also, he said, the requirement that patients are vaccinated using citizenship measures as identification — such as Social Security numbers, passports, and driver's licenses — will discourage undocumented immigrants from getting the shots, therefore undermining the effectiveness of the vaccine.

"We are quickly moving toward a Covid-19 vaccine, which is good news. However, the federal government's current plan to vaccinate Americans neglects key priorities that we need to effectively distribute the vaccine to millions of New Yorkers," Governor Cuomo said. "We need to focus on black, brown, Asian, and low-income communities that are historically underserved by the health care institutions that are key to the federal government's plan. I'm also concerned that by asking for personal information, undocumented immigrants could be dissuaded from taking the vaccine. Time is of the essence as we get closer to the distribution date and I urge the administration to address these issues quickly."

The governor's letter was signed by dozens of leaders representing community groups that work with the at-risk populations identified in the letter. Among the signers was Minerva Perez, executive director of Organizacion Latino-Americana of Eastern Long Island.

"The governor is 100 percent right. Any citizenship questions related to the administering of a vaccine do nothing to keep our state safe," Ms. Perez told The Star on Tuesday. "Whether someone is on a path to citizenship or not is irrelevant in the fight against this virus. We all want to have our lives back, rebuild our local economies, [and] get our children back in school. Latinos on the East End have been and will continue to be the drivers behind a healthy and a prosperous future for our entire region. Holding back a cure for a pandemic in this way is akin to an ethnic, racial, and class cleanse. It's abhorrent."