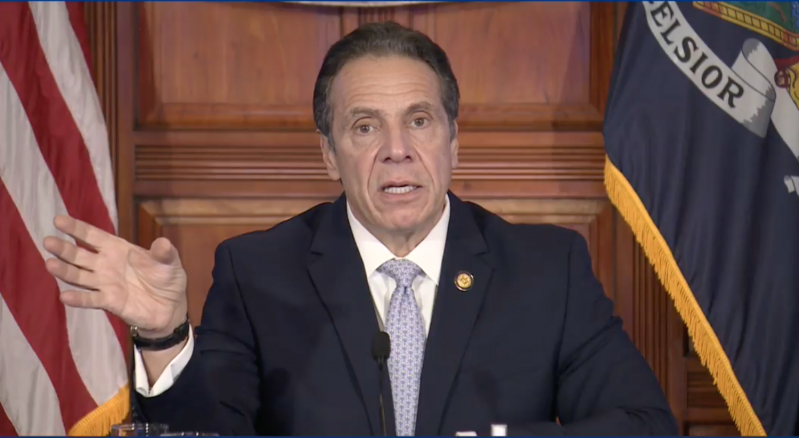 "Living room" spread of Covid-19 now accounts for about 75 percent of the virus’s transmission, New York State Gov. Andrew M. Cuomo said on Monday afternoon as he announced fine-tuned vaccination programs and precautions against the threat of a new Covid-19 strain spreading overseas. “Everything else is relatively de minimis” in terms of the risk of spreading the virus, he said, “and we’re in the heat of the holiday season.”

Hanukkah, Christmas, Kwanzaa, and New Year’s Eve make for a longer season than the Thanksgiving weekend, Governor Cuomo said, so if the state can make it through mid-January without a greater spike in infections, “then it’s just a sprint, us versus the vaccine.”

About 38,000 doses of Covid-19 vaccine have been administered so far in New York State and officials expect an additional 630,000 doses from the Pfizer and Moderna pharmaceutical companies in the coming weeks, Governor Cuomo said.

“We’ve already distributed more vaccine, and our hospitals have vaccinated more people than any state in the nation,” Governor Cuomo said, noting, “We did it despite the snowstorm . . . welcome to 2020.”

There will also be “community vaccination kits” that can be sent directly to areas that urgently need the infrastructure to do vaccinations. Set-ups will include everything from the vaccine itself to supplies, computer equipment, cleaning supplies, chairs and physical room dividers, and lighting. The program will target rural and poor communities, black and Latino communities, public housing, and other health care deserts to prevent the same kind of disproportionate impact that Covid-19 has already had on people in those demographics.

Concerned about the new, mutated form of Covid-19 that has caused havoc in the United Kingdom, Governor Cuomo said he has asked the three airlines that fly between New York and the U.K. to voluntarily require passengers to test negative before boarding flights to New York. One-hundred twenty countries have ordered such airline restrictions, and Governor Cuomo said he wanted to add New York to that list. he three airlines, British Airways, Virgin Atlantic, and Delta Airlines, have all agreed to do so.

He said he would not be doing his job as governor of New York if he “let the federal incompetence create another emergency and disaster that cost the lives of New Yorkers. I am only a governor, but I will do anything I can and whatever can to protect the people of New York. I know and believe my intuition is correct that this is another disaster waiting to happen.”

On Monday, officials reported a Covid-19 positive test rate of 5.28-percent across the state — excluding several hot spots — and 5.75 percent with the hotspots included. Long Island’s average positive rate was 6.39 percent for last seven days. Suffolk County reported a rate of 7.3 percent on Sunday and 7 percent over the last seven days.

Hospitalizations in New York increased by 146, up to 6,331, with new admissions outpacing discharges following the weekend. In Suffolk, there were 527 hospitalizations reported on Saturday. There were 109 Covid-19 deaths statewide in the preceding 24 hours, including nine in Suffolk, where the death toll has now reached 2,172.