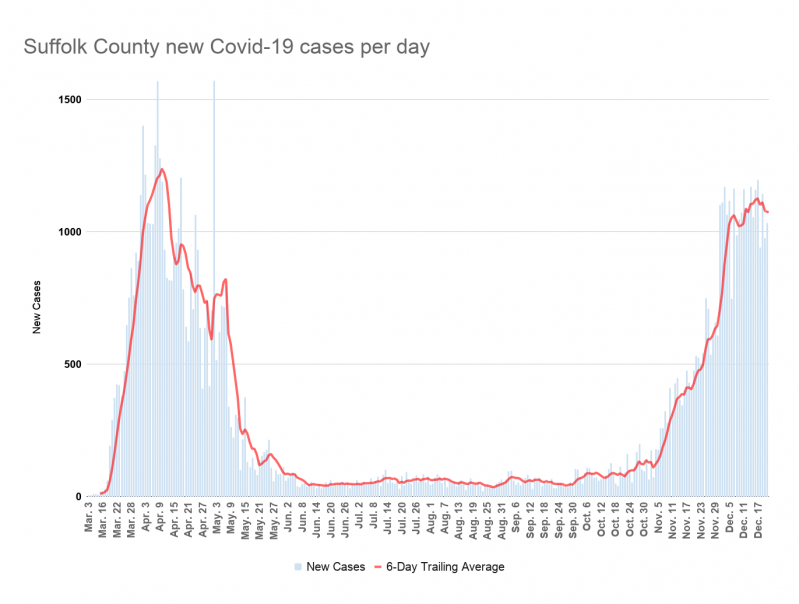 Some might say Christmas is the most wonderful time of the year, but it’s fair to say the holiday will — or should — look and feel different this year. Elected officials and health experts continued this week to urge people to avoid traveling and gathering in large groups this week and next as the Christmas, Kwanzaa, and New Year’s holidays arrive in quick succession.

Covid-19 continued to surge this week, with 1,034 new Suffolk County cases confirmed on Monday, the most recent date for which those data were available. That represents 7.2 percent of the 14,282 test results that came in that day; the seven-day average positive test rate was 7.2 percent as well.

For East Hampton Town, on Monday, the Suffolk County Covid-19 data tracker showed the total case count as 690 since March, an increase of 70 since Dec. 14. Southampton Town’s total count was 2,386 and Riverhead’s 1,530. Southold Town, which was a hot spot early in the spring, had 748, and Shelter Island 23. Those numbers reflect only patients who reported local addresses as their primary residences; actual case counts are likely higher because many people who also call New York City their home may have used those addresses instead.

The county death toll climbed to 2,185 with 13 more fatalities reported on Monday. Suffolk has now had 83,112 cases since March, when the county’s first Covid-19 patient arrived for treatment at Stony Brook Southampton Hospital.

”To help prevent further increases in confirmed Covid-positive hospitalized patients, please celebrate the holidays by staying home with the people you reside with,” the hospital said in a statement on Monday. “When in public, always wear a mask that covers your face and nose, maintain social distancing, and wash your hands well and often.”

A hospital spokeswoman said Monday that Stony Brook Southampton had 28 confirmed Covid-19 patients. Six were in intensive care, including four patients who were on ventilators. Sixty-five hospital beds were occupied and 53 were available. The hospital is still performing screenings, scheduled procedures, and surgeries.

The hospital declined to say how many of its employees have received the first dose of the Covid-19 vaccine, but confirmed it “has begun vaccinating our high-risk health care workers.”

New York State Gov. Andrew M. Cuomo, however, said on Tuesday that 50,000 health care workers had been vaccinated across the state so far. He said the state has 630,000 doses on hand and expects another 300,000 from the Pfizer and Moderna pharmaceutical companies in the coming week. The governor also expanded the categories of vaccine-eligible people to include nursing home workers and patients, federally-qualified health center employees, emergency medical technicians, medical examiners, coroners and funeral home professionals, and other congregant care workers.

There will also be “community vaccination kits” that can be sent directly to areas that urgently need the infrastructure to do vaccinations. Kits will include everything from the vaccine itself to supplies, computer equipment, cleaning supplies, chairs and physical room dividers, lighting, and more. The program will target “rural communities, poor communities, Black and Latino communities, public housing, and other health care deserts” to stem off the same disproportionate impact that Covid-19 has already had on people in those demographics.

”Left to the market’s forces, you will see once again Black, Latino and poor communities left behind,” Governor Cuomo said. “We’re doing everything we can to make sure that doesn’t happen, and I want this state to be a model for the nation of equitable outreach when it comes to a vaccine.”

Officials have also acknowledged there is a high level of skepticism in the community about a vaccine that is so new. Suffolk County Executive Steve Bellone on Tuesday launched an awareness campaign dubbed Take Your Shot. The initiative “will be a multifaceted, multimedia campaign that will incorporate social media, paid media, and trusted community stakeholders, with the goal of securing pledges from at least 850,000 County residents to commit to receiving the Covid-19 vaccine,” according to a press release.

Eyeing the new, mutated form of the virus that is causing havoc in the United Kingdom, Governor Cuomo said he has asked the three airlines that fly between New York and the U.K. voluntarily to require passengers to test negative before boarding flights to New York. One-hundred twenty countries have ordered such airline restrictions, and Governor Cuomo urged the federal government to add the United States to that list. He reported Monday morning that at least for New York State’s international airports, British Airways had agreed to mandate that passengers get tested. By Monday evening, the other two airlines, Virgin Atlantic and Delta Airlines, had also agreed to that policy.

Governor Cuomo said he would not be doing his job if he “let the federal incompetence create another emergency and disaster that cost the lives of New Yorkers. I am only a governor, but I will do anything I can and whatever can protect the people of New York. I know and believe my intuition is correct that this is another disaster waiting to happen.”

On Monday, the federal government reached an agreement on a much-anticipated, $900 billion coronavirus relief bill. Generally speaking, it provides money for each single person making less than $75,000 to receive a $600 payment and each couple making less than $150,000 to receive a $1,200 payment. The bill also reinstates supplemental unemployment insurance payments, though in the weekly amount of $300 instead of the $600 that unemployed people received earlier in 2020, for a period of 11 weeks. Extended Paycheck Protection Program benefits include help for businesses with fewer than 300 employees that are experiencing at least a 25-percent reduction in revenue. The relief bill also sets aside $20 billion to provide free vaccines for those who need them.

In New York State there will be no charge for Covid-19 vaccinations, “so there’s one less obstacle,” the governor said on Friday.