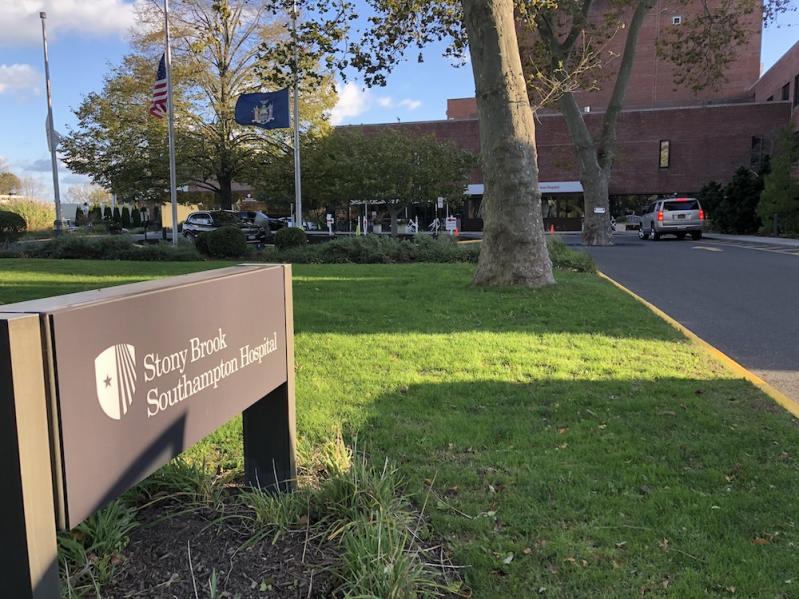 Anticipating that a surge in cases would be likely in fall and winter, Stony Brook Southampton Hospital has maintained an ample supply of Remdesvir, an antiviral medication, steroids, and other medications, as well as a state-mandated 90-day supply of personal protective equipment.
Carissa Katz
By Jamie Bufalino

"This year is far from normal and we cannot afford to move forward with normal celebrations," he said. "Contact tracing is identifying the surge as coming from small gatherings and, in many cases, small gatherings at homes."

On Tuesday, the county reported 430 new cases; it was the fifth time this month the number of daily cases had exceeded 400. The number of people hospitalized with the virus, which has been increasing in recent weeks, reached 100 on Monday. "We have not been at 100 hospitalizations since June 18," said Mr. Bellone. "What's abundantly clear is that this virus is spreading rapidly throughout our county once again."

New state regulations that limit indoor and outdoor gatherings at private residences to 10 people and require bars and restaurants to close at 10 p.m. took effect on Friday. The 10-person limit was put in place in response to "the recent prevalence of Covid spread resulting from small indoor gatherings including Halloween parties," according to Gov. Andrew M. Cuomo's office.

Mr. Bellone said he is worried that the night before Thanksgiving, "one of the biggest party nights of the year particularly for young people," will lead to a similar spread. "With bars and restaurants shutting down at 10 p.m. now, our young people are going to be tempted to attend indoor parties with drinking and the flouting of social distancing guidelines," he said.

The number of Suffolk County Police officers on duty will be increased that night, he said, and they will be ready to respond to any reports of violations of either Covid regulations or the social host law, which forbids adults from knowingly allowing minors to consume alcohol.

The county has also enlisted Partners in Prevention, a nonprofit that seeks to prevent substance abuse, to launch a social media campaign informing young people about the regulations.

"We're very, very worried about next week and the situations that can occur," the East Hampton School District superintendent, Rich Burns, said at a school board meeting on Tuesday. "Please, please make sure you keep your kids safe and watch their movements. Every news show is saying at this point that the next two to three months are the most dangerous that we╒re going to be going through and I think it will be the same here."

Thanksgiving Day get-togethers are also "a major source of concern," Mr. Bellone said. "Small gatherings that may seem harmless could lead to a spreader event."

Dr. Fredric I. Weinbaum, the chief medical officer at Stony Brook Southampton Hospital, agreed with that assessment. "Any party where you're exposed to someone you don't live with" is risky, he said. "The usual large extended family gathering is just a bad idea."

John Ryan Sr., an East Hampton School Board member who is patriarch to a large extended family here, has heeded the warnings. Normally 40 family members would come together to celebrate Thanksgiving he said on Tuesday. This year, "we will divide up."

Professors at the Georgia Institute of Technology (Georgia Tech), and researchers at Stanford University have developed a tool that quantifies the likelihood of being exposed to someone with Covid-19 based on a region's infection rate and the size of a party. In Suffolk County, for a party with 10 people, the tool as of press time estimated a 9-percent chance (1 percent higher than in New York City, but 12 percent lower than in Connecticut's Fairfield County); for a party with 15 people the risk increases to 14 percent, and jumps to 22 percent for a party with 25 people. The tool factors in an assumption that, based on the prevalence of the virus in antibody and other blood tests, the number of Covid-19 infections is actually five times higher than reported.

"In places with less testing availability, that bias may be higher," the developers said. The tool is available on Georgia Tech's website. The state has also developed a smartphone app, Covid Alert NY, that notifies users when they have had close contact with someone who has tested positive for the virus.

Those intent on traveling to a family holiday gathering, said Dr. Weinbaum, should "do it right" by getting tested for the virus within three days of leaving, quarantining upon arrival, and then, four days later, getting a polymerase chain reaction test, which detects the virus's genetic material. According to the federal Food and Drug Administration, the P.C.R. test is "typically highly accurate and usually does not need to be repeated."

Anticipating that a surge in cases would be likely in fall and winter, Dr. Weinbaum said Stony Brook Southampton Hospital has maintained an ample supply of Remdesvir, an antiviral medication, steroids, and other medications, as well as a state-mandated 90-day supply of personal protective equipment.

Although the number of people hospitalized has been increasing, he said, there are still far fewer patients than in the spring and the cases have been less severe. "We're not seeing as many patients in need of intensive care," he said.

Suffolk County Health Commissioner Dr. Gregson Pigott said last week that the majority of recent positive cases have been among people under 65, but those who require hospitalization have been older, said Dr. Weinbaum.

There are two distinct types of Covid patients, he said, those who are hospitalized with Covid-related pneumonia, and those who arrive at the hospital for other problems, ranging from a fainting spell to a seizure, and later discover they have the virus. The latter group has responded especially well to treatment, and doctors have learned how to provide better care to all patients, he said. Stony Brook Southampton has an in-hospital survival rate of more than 90 percent, he said, and "our hope and prayer is that even better therapeutics come along."

The confluence of flu season and the pandemic is a concern, and "that's why we encourage everyone to get vaccinated," said Dr. Weinbaum, who noted that medical literature suggests it is possible to be infected with both viruses at the same time. At the hospital's coronavirus testing sites, tests for the flu, strep throat, and respiratory syncytial virus, another highly contagious disease, are also available. Those who are sick can be diagnosed there, he said, rather than at a doctor's office where they would be more likely to spread a virus to others.

There has been promising news about vaccines for the virus this week. The Pfizer pharmaceutical company announced yesterday that the coronavirus vaccine it is developing has proven to be 95 percent effective, and earlier this week Moderna, a biotechnology company, said the one it is developing is 94.5 percent effective. The Pfizer vaccine would need to be stored at about -94 degrees Fahrenheit, whereas, according to Moderna, its vaccine can be stored for up to 30 days at "standard refrigerator temperatures."

A vaccine will likely not be available for months, but when one does arrive, the hospital has the capacity to efficiently store and administer it, said Dr. Weinbaum. For ultracold storage, the hospital can use a tissue freezer and can manufacture dry ice on site.

A greater concern is getting an adequate supply of the vaccine, he said, particularly the Pfizer one, which will require two doses that need to be administered 21 days apart.

In an effort to expedite vaccine distribution, both companies will be applying to the F.D.A. for emergency-use authorization, which according to the agency, allows "unapproved medical products . . . to be used in an emergency to diagnose, treat, or prevent serious or life-threatening diseases."

Another major concern, Dr. Weinbaum said, is that many people might be reluctant to get a coronavirus vaccine simply because it hasn't been officially approved by the F.D.A.