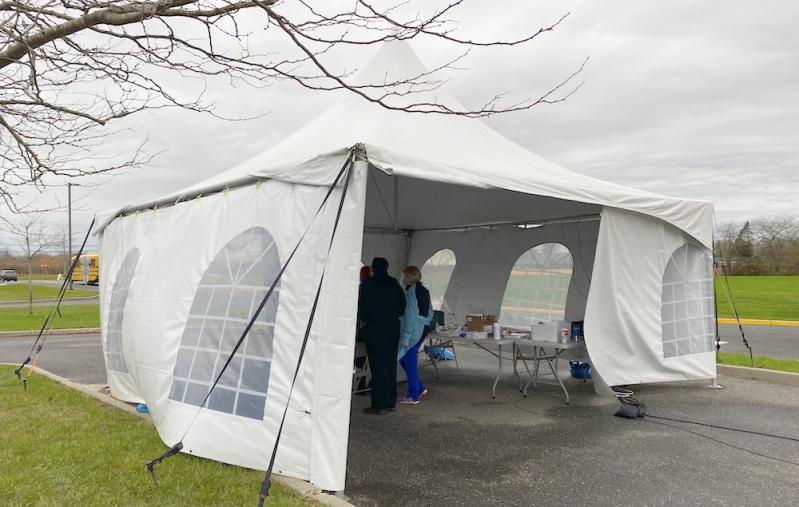 Covid-19 cases have increased dramatically across the Suffolk County in recent weeks. Above, a testing site at East Hampton High School.
Christopher Walsh
By Christopher Walsh

Citing an “alarming spike in new Covid-19 cases” over the last week, Suffolk County Executive Steve Bellone announced on Friday the immediate deployment of enforcement teams comprising a county fire marshal and an official from the county’s Division of Consumer Affairs that will supplement ongoing compliance efforts.

The county will also “significantly enhance” contact tracing in response to the surge in Covid-19 infections with the activation of 200 case investigators, Mr. Bellone said. Prior to the surge in positive infections, the county had approximately 30 such investigators, he said. The goal is for investigators to reach all positive cases within 24 hours of diagnosis. “In addition to that are an army of 1,000 New York State contact tracers working on Suffolk County cases,” he said.

The announcement came hours before New York State-wide orders take effect mandating that all State Liquor Authority-licensed establishments and gyms close at 10 p.m. and that home gatherings, both inside and out, be limited to no more than 10 people.

The enforcement teams are charged with informing and educating commercial establishments and the public as to the new restrictions, Mr. Bellone said, and are authorized to issue citations to those not in compliance. “If they observe egregious violations they will act, obviously,” Mr. Bellone said. “With new restrictions in place, they will be out there enforcing these restriction and communicating those. That’s going to be very important as these new restrictions come into place. . . . As we have acted in the past, we will not hesitate to act.”

The spike Mr. Bellone referred to started last weekend “with the highest numbers we’ve seen since May.” Two consecutive days with more than 250 new cases, and positive infection rates above 2.5 percent, were quickly followed by 324 new cases reported and a positive rate of 3.8 percent on Monday.

There were 428 new cases reported Thursday and a countywide positive rate of 3.6 percent. The county's seven-day rolling average of positive cases had reached 3.2 percent, according to data from the state.

These represented “a major increase from the 1 percent we had been hovering around for months,” he said. “But it didn’t stop there: On Wednesday there were more than 400 new cases.” The seven-day average of new cases is now more than 300, compared to the prior week’s average of 119, he said.

Mr. Bellone blamed the surge on indoor gatherings and Halloween parties. “We know where this virus is spreading,” he said, citing indoor private gatherings and at indoor bars and restaurants. “No matter where you are or what you’re doing, social distancing and mask guidelines must be followed,” he said. “We’ve come too far to go back now.”

Asked whether parts of Suffolk County might be considered what the state is referring to as micro-cluster zones that could see targeted mitigation and increased restrictions, Mr. Bellone said, "We haven’t heard any specific information about particular clusters. And honestly, the numbers you look at, we are seeing community spread throughout the entire county."

“I do not want to see more restrictions take effect, which would slow our recovery even more,” he said, but there is “a short window of time to get these numbers under control.” A prolonged surge will inevitably lead to further restrictions, he said. “This has always been up to us. We crushed the virus through the spring and kept the numbers down through the summer and into the fall.”

He encouraged anyone who plans to travel during the Thanksgiving holiday to quarantine or get tested prior to traveling, to remain outdoors as much as possible, and to limit the sharing of food. “Small gatherings that seem harmless because they are small could lead to a spreader event,” he said.

“I know people are exhausted dealing with the virus,” he said. But as the county, the state, and the nation are experiencing a second wave of Covid-19 infection, “now is the moment we need to rise to the occasion once again.”

“We have made all this progress, we have reached a point where we can actually see the possibility of a vaccine that could help end this pandemic and return us to normalcy,” Mr. Bellone said, “but we are now in a period where cases are surging. As we approach winter, it is critically important that now we redouble our efforts, recommit ourselves to things that have gotten us through this virus so far, that have allowed us to make this progress.”