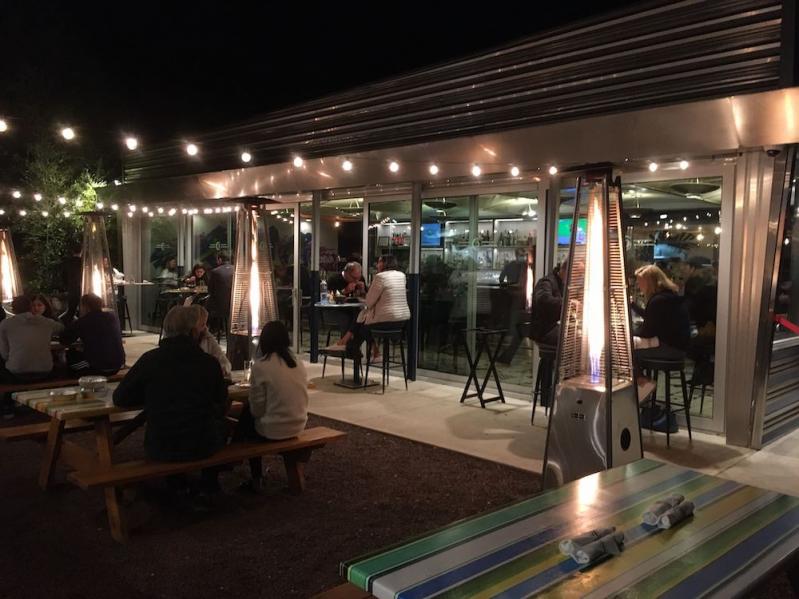 Coche Comedor in Amagansett on a recent evening. Bars and restaurants across the state will have to close at 10 p.m. to all but curbside pickup as of Friday.
David E. Rattray
By Christopher Walsh

With the number of Covid-19 cases in New York growing at a faster rate than at any point since the spring, Gov. Andrew M. Cuomo announced on Wednesday that all New York State Liquor Authority-licensed establishments and gyms must close at 10 p.m. and that private gatherings in residences, whether inside or out, will be limited to no more than 10 people. The restrictions go into effect on Friday.

“If you look at where cases are coming from, do the contact tracing, you’ll see they’re coming from three main areas, and we’re going to act on those three areas,” the governor told members of the press.

S.L.A.-licensed establishments — primarily bars and restaurants but also venues that can include bowling alleys, for example — must close at 10 p.m. These establishments are “one of the main spreaders of Covid,” he said.

After 10 p.m., restaurants will be allowed to offer curbside pickup only.

Gyms have also been identified as “a spreading element,” the governor said. Private gatherings of more than 10 people are the third culprit, he said, pointing to Halloween parties and get-togethers to watch sporting events. Nearby states that have seen a precipitous rise in Covid-19 cases have already capped private social gatherings at 10 people, “and we’re going to follow suit, because I try to keep symmetry with surrounding states,” the governor said.

“Bars, restaurants, gyms, house parties — that’s where it’s coming from, primarily,” he said. “Those are the ones that we can address.”

He implored New York residents to comply with all protocols, and local governments to enforce them. “There are only two fundamental truths in this situation: It’s individual discipline, and it’s government enforcement, period, end of sentence. We went through this with bars and restaurants once before. We put rules in place. There was widespread lack of compliance. Local governments, some did a good job, some really did not. We then had to put together a state task force,” a multi-agency group that inspects S.L.A.-licensed establishments. The S.L.A. has suspended the liquor license of bars and restaurants across the state for violating rules on capacity and other safety protocols.

In Suffolk County, 12,162 tests results were reported on Tuesday and 412, or 3.4 percent, of them were positive. It was the third straight day that the infection rate had topped 3 percent. It was 3.8 percent on Sunday, when 324 people tested positive, and 3.6 percent on Monday, when 280 people tested positive. The county's seven-day rolling average of infection is now up to 2.7 percent.

The governor said that 164,000 test results had been reported statewide on Tuesday, and that 2.9 percent of them were positive.

Trees, Wreaths for Sale in Amagansett
Holiday Cheer Is Coming to Sag Harbor
Even More Thanksgiving Options From the Pike and Old Stove
END_OF_DOCUMENT_TOKEN_TO_BE_REPLACED