Some told to stay ashore; party boats in limbo 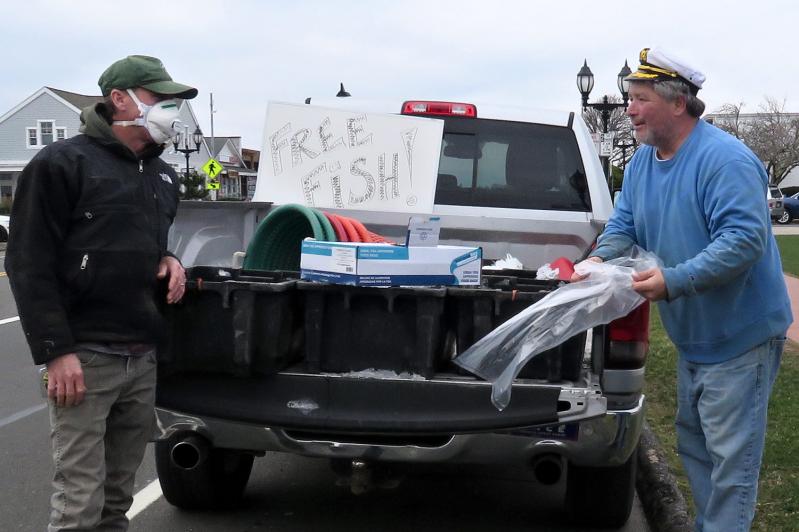 In downtown Montauk on Saturday, Capt. Chuck Morici gave away 1,000 pounds of fluke that he and his mate, Jim Foley, had caught the day before on the Act I. Scott Pitches was among his “customers.”
Jane Bimson
By Jon M. Diat

Unable to sell a 1,000-pound catch of fluke last week, Capt. Chuck Morici of the dragger Act 1 spent three days filleting the fish at Montauk commercial dock and offering it for free straight from his boat. On Saturday morning, he gave it away from the back of his pickup truck in downtown Montauk, a big handwritten sign announcing, “Free Fish.”

In a normal year, the religious period of Lent, when many people give up eating meat, tends to drive up seafood demand and prices. But the global COVID-19 pandemic has thrown normal to the wind.

In addition to the closure of most domestic restaurants, foreign markets such as Spain and Italy, which before the pandemic were historically large buyers of squid landed on the East End, for example, have stopped all imports. As a result, many fish buyers have implored fishermen to stay ashore.

Prices have fallen dramatically, said Bonnie Brady of Montauk, the executive director of the Long Island Commercial Fishing Association. “Everyone is frustrated that the buyers are not buying fish, but at the same time the restaurant market has dried up, and New York has always been beholden to the fresh fish market because we haven’t had processing to help us.”

Ms. Brady, whose husband, Dave Aripotch, is the owner and operator of a trawler, said that fluke that would normally fetch around $3 a pound at this time of year has cratered to 50 cents a pound. The price for porgies has fallen from $1.25 a pound to as low as 10 cents in some cases, she said.

Like people in every other business, those involved in the commercial and for-hire fishing businesses, including baymen and charter and party boat operators, face deep uncertainty as the pandemic wreaks havoc with markets around the world.

“I’m scheduled to have my boat in the water by April 1, and I have charters starting in mid-April,” Capt. Tyler Quaresimo said on Saturday afternoon at the Montauk Marine Basin, where he was finishing off a complete retrofit of his 42-foot charter boat Simple Life. “I’m glad I’ve had the time to work on my boat, but I’m hoping to fish soon.”

“This is something totally new we are dealing with, so we really don’t know what’s going to happen,” said his father, Capt. Jamie Quaresimo, who was helping him out. “All we can do is hope for the best.” The older

Captain Quaresimo owns the Miss Montauk II, an 85-foot party boat, and he is concerned about whether he will be able to sail in May for the fluke opener, which is when he really begins to earn his income for the year. “Our fingers are crossed.”

Capt. Mike Vegessi of the Lazybones, another Montauk party boat, usually begins his season with fluke, too, and because of that, “We have not seen the economic impact yet. I hope things will improve by then,” he said while repairing a starboard rub rail on his 55-foot boat on Saturday, also at the Marine Basin.

Tyler Quaresimo had not had any cancellations from his April charters yet, but he had received a few calls from those who have booked a trip inquiring if it was still on the schedule.

“We’ll see what the situation is as we get closer to those dates and make a determination then,” he said. “Hopefully this calms down soon, but I believe that people will also be very cautious at first.”

“With all of the restaurant closures, the demand and price for fish has fallen through the floor the past few weeks,” said Charlie Etzel, a longtime Montauk commercial fisherman. “My boat will likely go in the water soon, but I probably won’t start fishing until later in May when bluefish and striped bass show up. But who knows?”

“I’m getting ready to put in my three pound traps for the season,” said Jon Semlear, a Noyac bayman, “but will the buyers be ready and willing to buy from us?”

“My main money fish is bunker, which I sell to bait companies, crabbers, lobstermen, and others. But I just don’t know how much they will want to buy as the season gets going.”

The people who use bunker as bait to catch blue-claw crabs sell much of their catch to Asia, for example.

“Obviously there is no market for that now, and who knows when it will come back,” Captain Semlear said.

With the dearth of bay scallops this winter, Captain Semlear, whose father was a medical doctor in Sag Harbor, resorted to pulling a bull rake for hard-shell clams in Shinnecock Bay to help make ends meet. Three weeks ago, Braun’s Seafood in Cutchogue, his local seafood buyer, told him to stop bringing in clams. Demand had dried up.

“About 90 percent of their market is to the restaurant trade,” he said. “This situation is very scary. All I know is that all this is going to get worse before it gets better.

Danny Lester, an Amagansett bayman, enjoyed a brisk business on Abraham’s Path on Saturday, where he was offering freshly caught oysters and clams, as well as fresh eggs, from several coolers at the end of his driveway. Payment was on an honor system, in proper accordance with the new days of social distancing.

“So far, so good,” Captain Lester said on Sunday while making one of several home deliveries to customers who had placed orders. “With all of the people who have come out here, people are looking for fresh food, and the response has been very positive so far. We’ll see how it goes.”

As he has done for decades, Mr. Lester is also preparing to set a dozen pound traps from Napeague to Gardiner’s Bay over the next few weeks as the spring run of fish move in. “With the good weather, we’ve put in three sets of poles already,” he said, but, like Mr. Semlear, he doesn’t know how much he will be able to sell.

“I’m going to reach out to my buyer at Hunts Point and see what he’s thinking,” he said. “Plus, what kind of prices will be paid? . . . This virus has changed the game for many of us. We don’t know what the future holds.”

“A large majority of the fish landed in Montauk and Shinnecock gets shipped to the Hunts Point Market in the Bronx, where most of it is bought by restaurants,” Ms. Brady explained. At the old Fulton Fish Market in Lower Manhattan, almost 40 percent of sales were from foot traffic. Chefs from eateries in Manhattan, New Jersey, Queens, and Brooklyn would visit the market to pick out their own fish. The Bronx location today is more difficult to reach.

In recent weeks Ms. Brady’s days have been filled with outreach to county, state, and federal officials pleading for help finding a solution to the problem. She is also working closely with Southampton Town Councilwoman Julie Lofstad, who owns a commercial fishing business with her husband in Hampton Bays.

“Everyone is frustrated that the buyers are not buying fish, but at the same time we need to find a pathway through this abundant resource to get the fish in the hands [of people] who need and want it,” she said. “Out here on the East End, or somewhere in Suffolk or Long Island in general, we should have processing places to cut, store, and freeze the product for future use. And then of course, we need buyers. But many large-bulk buying outlets require finished, ready-to-use product. Without processing, we are stuck.”