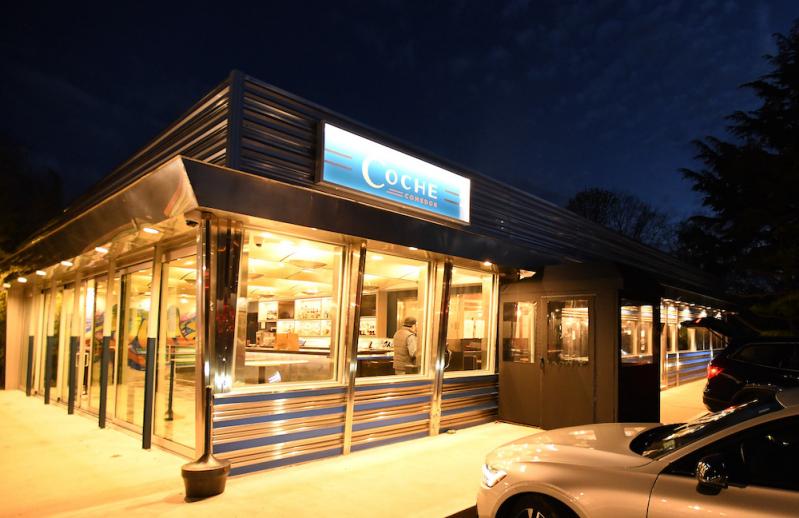 Mark Smith, a partner in the Honest Man Group, which operates Coche Comedor, above, and other South Fork eateries is one of a dozen-plus members of East Hampton Town's Business Recovery Group.
Doug Kuntz
By Christopher Walsh

With Memorial Day weekend approaching, the East Hampton Town Board announced last week the formation of a committee comprising business leaders that is charged with developing recommendations to ensure a safe reopening of the town’s businesses.

The committee, known as the Business Recovery Group, agreed at its first meeting last week to “make sure we don’t have a second wave” of Covid-19 infection “by opening too soon, by being careless when we open, by not looking at social distancing,” said Deputy Supervisor Sylvia Overby, who is its liaison to the town board along with Supervisor Peter Van Scoyoc.

“If we get a second wave toward the end of the summer, it could be devastating to our businesses,” Ms. Overby said on Tuesday.

East Hampton Village Mayor Richard Lawler and Becky Hansen, the village administrator, have also been named to the Business Recovery Group, Ms. Overby said on Monday, and a medical professional will join it as well. The committee was to meet again yesterday.

It will coordinate state guidelines and specific industry practices with local measures needed to enable businesses to reopen and for people to return safely to work. Its recommendations will take into account the Covid-19 infection rate and progress made against its spread, as well as the potential for a future resurgence.

The group will “look at protocols that different sectors of our economy might be able to employ, and should employ, to keep people safe,” Ms. Overby said. “We don’t know exactly what that’s going that’s going to look like yet.” Directives from Gov. Andrew M. Cuomo and the federal Centers for Disease Control and Prevention will guide the group, she said, “and we’re going to work toward having the best summer possible while we keep the community as safe as possible.”

“We may be in a position where we have to rethink some current zoning on a temporary basis,” Mr. Van Scoyoc said at the town board’s meeting last Thursday, “in order to get us back on our feet.”

“We’re going to have to be nimble and flexible,” he said, “always keeping our eye closely on the disease and deterring it. Our progress against it has to be job one. Public health comes first. We can’t have a vital, vibrant economy if there’s an ongoing public health threat.”

Blocking some streets to vehicular traffic, particularly in Montauk, has been discussed, Ms. Overby said, to allow pedestrians to practice social distancing.

The committee also discussed increasing restaurants’ outdoor seating while limiting capacity inside. Hotels, she said, might handle guest check-in via text message to eliminate face-to-face contact, and might be prohibited from same-day turnover of rooms. “There is concern about the number of employees that we will be able to have for restaurants and hotels,” Ms. Overby said. “The staff could be limited by a number of things, including visas — those are not being granted at the moment.”

Businesses want to reopen “the right way,” Ms. Overby told her colleagues on the town board on Tuesday. Some Montauk residents, however, are concerned about visitors to those businesses, specifically that “it isn’t a free-for-all once you get here,” she said. “It can’t be business as usual, the vacation they had last year. We want to be able to see that the businesses are able to talk to the people that are coming to make sure they behave themselves.”

Communication will be essential, she said, and the public will have to understand that protocols could change suddenly, as conditions warrant. “Even though we might say ‘This is going to happen,’ as we start to evolve we may find that that isn’t going to work. It does have to have some form of understanding from all businesses and the community, that even though something is written in a guideline, those might change on a dime.”

The town board continued to consider the evolving situation on Tuesday. Business leaders “are all quite aware of the need to reopen in a way that takes the very best science and medical advice,” Mr. Van Scoyoc said, noting businesses’ concerns about liability. “Running businesses safely is really in the forefront of most businesses’ operations. It was encouraging to see that message was already well understood amongst our business leaders. Clearly, as we move forward we have to do it in a way that protects everyone. They don’t want to see us have to take a step back, they don’t want to overreach, they understand that could be more catastrophic than a slow opening.”

Throughout the pandemic, Councilman Jeff Bragman has urged a conservative approach to a resumption of activity. “I think that we’re going to have to hunker down in this social isolation,” he said. “I think it’s going to extend through the summer. . . . We have to be disciplined about this, and intelligent about it. We have to act in solidarity with each other. That means keeping each other safe by keeping ourselves isolated.” The alternative, he said, “is a pretty grim battle.”

Ms. Overby said that she hoped to have recommendations and guidelines determined by Friday, May 15, coinciding with the expiration of the governor’s New York State on Pause order, though that expiration is likely to be extended in regions hard hit by the pandemic, including Suffolk County.

East Hampton Samples Are a Crucial Contributor to Lyme Test
Ready to Adopt a Pet? ARF Is Ready, Too
Guild Hall's Curator Visiting Studios Virtually Through June
Seeking Stories and Images From the Time of Covid
END_OF_DOCUMENT_TOKEN_TO_BE_REPLACED