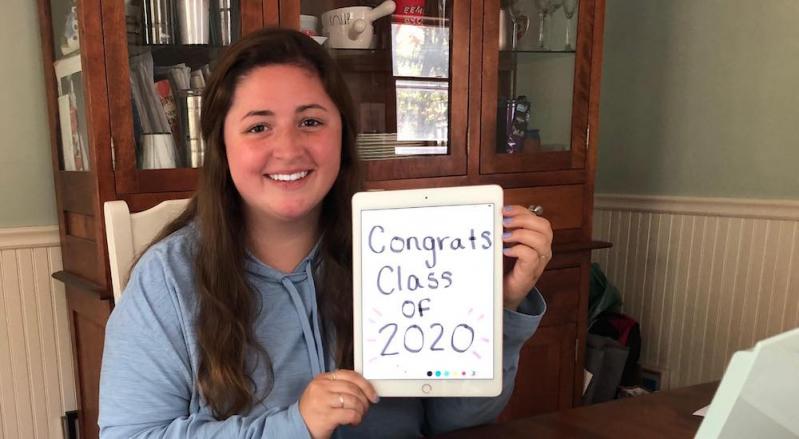 There are approximately 230 seniors in East Hampton High School's class of 2020, and community members are lining up by the dozen — virtually, of course — to make sure every one of them feels special during these challenging times.

Inspired by a similar initiative at Avon Grove High School in Chester County, Pa., where her niece is a senior, Amanda Borsack Jones started a Facebook campaign to "adopt a Bonacker senior student." In just a few days, the Facebook group grew to about 300 members wishing to surprise East Hampton students with good cheer.

"I think it's a positive thing. The parents are so excited about it," said Ms. Jones, a local musician and music teacher who has a son in 12th grade at East Hampton. "I think we're looking for those places to bring our kids a little glimmer of hope and happiness during this time."

The effort started to pick up steam shortly after Adam Fine, the high school principal, finished developing plans for this year's graduation ceremony.

The school will make use of its expansive parking lot to line up spectators' cars "like the Orient Point ferry," Mr. Fine said. "We have a stage that will look exactly like any other graduation. Speeches will be live. I have a huge screen for the middle of the parking lot. All students will walk to the stage to get diplomas."

LTV will also live-stream the event on its YouTube channel.

He and Tonya Gregg, an East Hampton senior class advisor, are working with Ms. Jones to make sure every senior gets "adopted." Some community members chose students they already knew, while other volunteers said "sign me up" for someone at random.

Jacqueline Bates, a 2016 graduate of East Hampton, and her mother, Valerie Bates, decided to adopt a pair of senior girls. They plan to make the girls custom water bottles and give gifts of candy and other goodies.

Jacqueline Bates graduated this semester from Susquehanna University, having majored in early childhood education and special education, but her own commencement ceremony was canceled, of course. "We had a digital, two-minute conferral of degrees," she said. "I resonate with how they're feeling, especially since high school graduation is such a big milestone. I had that milestone and want to pay it forward to them."

The Neo-Political Cowgirls, a nonprofit performing arts organization in East Hampton, is also stepping up to honor the seniors with an art project it calls "Together/Apart." On Tuesday, June 23, and Wednesday, June 24, from 9 a.m. to 4 p.m., the Neo-Political Cowgirls will invite people to write well-wishes, poems, advice, or other congratulatory messages on squares of fabric that will then be hung on the fence at the high school. Mask-wearing will be required and social distancing will be regulated.

"The project hopes to give support in sending the seniors off onto their next journey in life during these challenging times," Kate Mueth, the founder and director of the Neo-Political Cowgirls, said in a statement.

For Ms. Jones's adopt-a-senior project, there aren't mandatory boxes to check off for those who have signed up, but she hopes they go to thoughtful measures in reaching out to the students.

"I didn't want to put financial requirements on it," she said. "Writing a card to someone can mean the world. In today's world where everything is digital, you don't have as much that's tangible to hold onto. It could be postcards, pictures, a flower from their garden. It can be inexpensive ways to show love, but it could also be more extravagant depending on the person and their means."

"Every kid in that senior class is going to be adopted by someone. I am excited to see how it plays out," Ms. Jones later added. "It's been heartwarming. . . . If they feel like they are valued by people other than their family, it means a lot."

Mr. Fine said he liked the idea of the adopt-a-senior campaign, saying, "I think community initiatives should be supported and celebrated."