At a precipice of peril 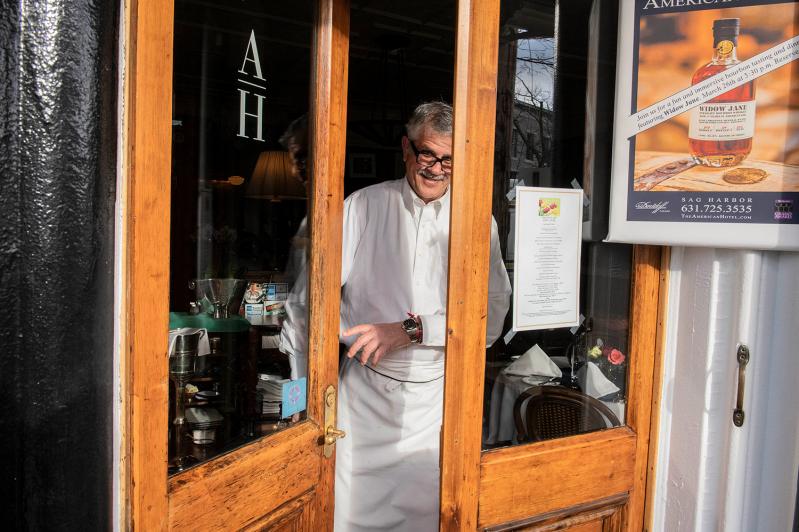 With restaurants ordered to close their dining rooms and transition to takeout and delivery only on Monday as the fight against COVID-19 ramps up, Paul Novack, a bartender at the American Hotel in Sag Harbor, locked the door after the last customer departed.
Doug Kuntz
By Jamie Bufalino

Businesses of all sorts in New York State ground to a screeching halt this week, as the COVID-19 pandemic forced a near-total shutdown of commercial activity and ordinary life.

As the federal government struggles to catch up to the fast-evolving pandemic — President Trump declared on Monday that the crisis could last into July, August, or beyond — the 2020 tourist season, the most critical weeks for so many South Fork residents’ financial well-being, is suddenly uncertain.

Restaurants, which were still doing a brisk business over the weekend with an influx of second-home owners fleeing the increasingly locked down New York City area, were ordered on Monday to offer takeout and delivery only. The state also ordered theaters, gyms, fitness studios, and other businesses deemed non-essential to close. Grocery stores, gas stations, pharmacies, medical facilities, and media outlets may remain open.

The economic impacts of the closures and curtailing of regular operations will be massive by all estimations.

To assess the extent of the damage the pandemic has had on business, Suffolk Executive Steve Bellone announced on Tuesday that the county’s Labor Department will begin collecting data to “find out what is happening on the ground and what is happening with the workforce.”

The Labor Department will then use that information to advocate for funding and other support from the state and federal governments. “What we’ve seen over the last week has been stunning in terms of how quickly this has impacted the economy,” said Mr. Bellone.

The county has already formed a business resource center that can be reached by calling 311, Suffolk Legislator Bridget Fleming said in a video posted on her Facebook page on Tuesday. “It’s important that we hear from businesses, not-for-profits, and art institutions so we can advocate for you at the state and federal level and help you get those funds.” Earlier that day, she said, she had proposed legislation that would allow the county to waive certain fees and taxes for small businesses.

The voluntary order for people to remain at home and for restaurants to shut their dining rooms, have turned the village into “pretty much a ghost town,” Mr. Lawler said yesterday. “We’ve had 100 percent compliance from restaurants,” he said. “But you can imagine the economic impact of that.”

There have been numerous reports of empty shelves at supermarkets and other stores as year-round and part-time residents stock up for an indefinite period of isolation. Stores have begun rationing many food and household staples, to ensure there is enough to go around, and shifting how they do business.

At Cirillo’s Market, a.k.a. the Amagansett I.G.A., over the weekend, for instance, customers were limited to no more than eight rolls of toilet paper per person.

Provisions, a natural foods store and cafe in Sag Harbor, has shifted how it does business for the sake of customers and staff. Only eight people are allowed in the store at any one time. “We also have spacing for where they are supposed to be on line, and we’re only running two registers, the two farthest from each other,” said Chris Gangemi, a manager. He is working on a web-based system that would allow people to order online for curbside pickup, “essentially turning the store into a warehouse.”

“There’s not necessarily a shortage, the suppliers are just taking a little longer to deliver the merchandise,” Lisa Field, the owner of the Sag Harbor Variety Store and the president of the village’s Chamber of Commerce, said of her shop, which has been doing a brisk business due to the increase in New York residents who have decamped to their summer or weekend houses earlier than usual. Many stores in the village remained open as of midweek.

“The bills and the employees still need to get paid, so they need to stay open,” Ms. Field said. “It would be nice to say, ‘Okay, let’s just stay home for two weeks,’ but you can’t.”

With Reporting by Carissa Katz, Christine Sampson, and Christopher Walsh