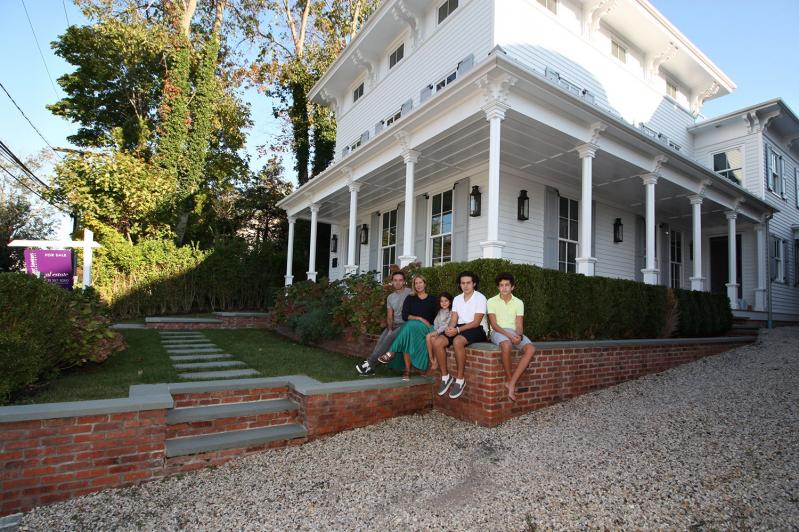 The first occupants of the Morpurgo house in many years are the members of the family that owns it and completed its restoration, from left, Max Breskin, Michelle Breskin, and their children, Emma, Kai, and Lookie.
Durell Godfrey
By Christine Sampson

The East End real estate market is undeniably hot right now, the flame lit by the Covid-19 pandemic that has motivated more year-round residents to shelter in place out here. But one special house in Sag Harbor is still for sale, its price dropping twice despite having had quite a few looks from prospective buyers.

November will mark two years since Breskin Development wrapped up a major restoration of the house at 6 Union Street in Sag Harbor, commonly known as the Morpurgo house or, preferred by its owners, the Captain John Hulbert house, after one of the first designers of an early American flag. The house is listed with Nestseekers at just under $6.5 million, down from its initial asking price of just under $7.5 million.

That it hadn't been sold yet amid the pandemic was serendipitous for Max and Michelle Breskin, who are the actual owners of the house, and who, with their three children, are its first legal occupants in many years. They first stayed during the month of July, and returned in September.

Though it is a pit stop for the Breskins, a family of five -- they recently sold their own residence in Water Mill and at the moment are looking for another piece of land to develop -- it has been quite the experience for them so far.

To live in the house their business restored is "to finally get to enjoy it, which you don't always get to do," said Ms. Breskin, who designed many of the interior and exterior features. "It's the little things, like the back stairs or the second-floor laundry. They were decisions back then and now we get to enjoy it."

In no way did they design the house with themselves in mind, Mr. Breskin said, but it was done "with an eye towards how you'd live in the house."

But, he said, "We never use the elevator." Nor do they use the front door much -- mostly just to bring in groceries.

Annselm Morpurgo, who in 1975 inherited the house with her sister, Helga, was the last known resident of the house prior to its redevelopment. It had some eight bedrooms, seven of which were rented out. By some accounts, Annselm Morpurgo was still living there in 2008, after it had been sold at court-ordered auction in 2007, without permission of the owners.

The house was nearly torn down. Before efforts to restore it were underway, it had missing floorboards, a nearly-collapsed chimney, and rodents everywhere. "I don't know if the building can even support its own weight," Tom Preiato, Sag Harbor's building inspector, was quoted by The Sag Harbor Express as saying in April of 2016. While it was on its way up from dilapidated and dangerous, Breskin Development acquired the house in the summer of 2017 from Mitch Winston and his partners, who had bought it at auction for $1.325 million in June of 2016.

The Breskins had a limited footprint -- just one-fifth of an acre -- and a strict set of aesthetic parameters to work with, because the house dated back to as early as 1740, which meant it was one of the historic houses that fell within the purview of the village's board of historic preservation and architectural review.

"The 20th president, Chester A. Arthur, came here during the summertime and stayed at 20 Union Street," mused Kai Breskin, who is the family's oldest son and a dedicated student of history.

"I'm not as into history," said Lookie Breskin, Kai's younger brother. Instead, he's into design and architecture, like his parents, and has actually helped sketch up concepts for Breskin Development's clients.

They also have a kid sister, Emma, who attended kindergarten at Sag Harbor Elementary School three years ago and cherished the school's traditional "morning program" every day. Now, the kids do their studying at home, in the dining room, remotely through their New York City schools.

They like being so close to the shops and amenities in Sag Harbor -- the Wharf Shop, sailing camp, and the like -- which the Union Street house affords them. "We have things here you're not going to have in Bridgehampton north," Ms. Breskin said. "The kids have more freedom. They can go get ice cream. We can take an evening stroll to the harbor."

"I don't think there's anything you can really compare it to in the Hamptons," Mr. Breskin added.

"I definitely love living here," said Kai, who sometimes sits on the roof outside his window. "Lookie and I have bedrooms with beams from the original house. They run across the ceiling. It makes the room feel whole, like it's got some texture."

The 6,000-square-foot house has five bedrooms, five bathrooms, a bar on the third floor, a roof deck with a fireplace, a finished basement, and a pool.

Commenting on the restoration in October 2018, Ms. Murpurgo told The Sag Harbor Express that the new owners had done a "good job with the interior, but the front new-brick steps are way out of character and should be covered with faux slate." She was critical of the landscaping, suggesting it should consist only of ivy and myrtle, with "lavender and blue wisteria around the porch and up the sunny side of the house, giving it a sultry look." By her estimation, the pool should have been in the basement, but these perceived flaws, she told The Express, "can be easily corrected."

Efforts to reach her this week were unsuccessful.

Nestseekers agents, among them Ms. Breskin, have shown the house a few times since the family moved in.

Rob Walford, a managing partner in Breskin Development, said he's glad to see the house being occupied, even if it's just temporarily.

"I always have the perspective that a house deserves to have a family living in it," Mr. Walford said. "It's nice that a family is enjoying living there for now. It's not a museum, it's a home."

He said he feels the $6.495 million asking price is competitive and that the right person -- maybe a lover of history -- will come along eventually.

"It'll be exciting to finally find a family that will be the long-term owners of the house," Mr. Walford said. "It sounds corny, but I think it really does deserve it. It's been through a lot."