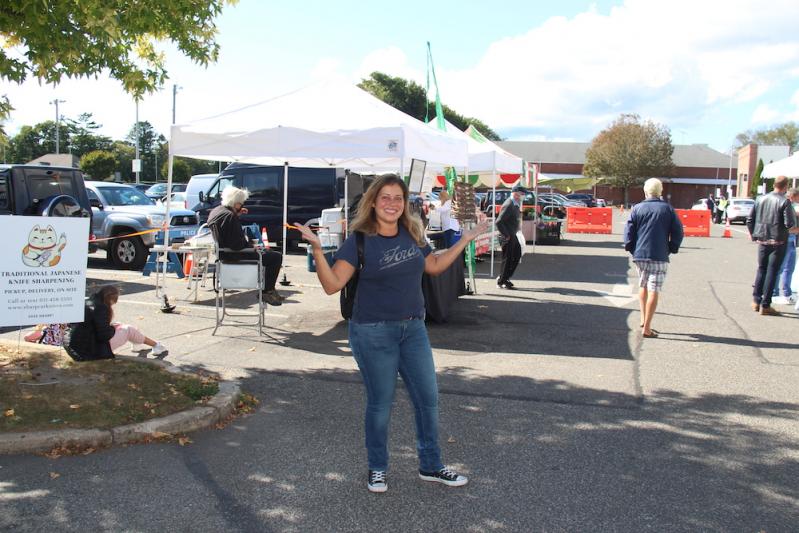 The East Hampton Farmers Market, which had ended its summer season on Sept. 1, was back in business on Sunday in East Hampton Village's Reutershan parking lot. It will be held there weekly from 10 a.m. to 3 p.m. through Dec. 20.

"We're so excited," said Kate Plumb, the market's manager, who had met with East Hampton Village Mayor Jerry Larsen and Police Chief Michael Tracey on Friday morning to plan the layout for the tents, which were set up in the southeast corner of the lot near the Party Shoppe, Park Place Wines and Liquors, and the rear of the Cittanuova restaurant.

Ms. Plumb said village officials were eager to bring the market to the heart of the village. "This is the first time we've been wanted in 15 years," she said. The market has traditionally been held in the parking lot at Nick and Toni's restaurant on North Main Street, but this summer, because of the pandemic, it was moved to the grounds of Calvary Baptist Church at Spinner Lane and Springs-Fireplace Road to provide more space for social distancing.

The market will consist of approximately 15 vendors, who will be wearing masks and working out of 10-square-foot tents. Similar to this summer's market, there is only one-way foot traffic and a separate exit and entrance.

The East Hampton Village Board approved a special event permit for the market in a unanimous vote at a meeting last Thursday. Prior to the vote, the board's Arthur Graham expressed concerns about a lack of specifics regarding how the market would operate. He said the application for the event did not provide sufficient details about how parking and traffic flow in the lot would be impacted, how trash would be collected, or how Covid regulations, such as the prohibition on gatherings of more than 50 people, would be enforced. He also asked if a process for contact tracing would be in place.

"The fact that they want to start it this Sunday is a little abrupt," he said. "I don't know that this has totally been thought out at this point."

Sandra Melendez, a trustee, said the managers are experienced at operating the market, and are well aware of the Covid regulations. "This is nothing new for them," she said. "This will be the same thing that was happening at Nick and Toni's every Friday, so they all know they have to pick up and leave [the area] the way they found it." The market, she said, would be a great way to bring the community together.

"I don't have an issue with trying it, and if it doesn't work we'll readjust for the following Sunday," said Mr. Larsen. He and Ms. Melendez were in attendance on Sunday, greeting vendors and shoppers.

On Tuesday, Mayor Larsen posted a picture of himself in front of the Montauk Scallop Company booth at the market and wrote, "Thanks to all who came down to the first farmers market at the Reutershan parking lot. It was incredibly successful for the vendors who attended, but most importantly the village shopkeepers saw a nice bump in sales."
--
Note: This article has been updated since it first appeared online.