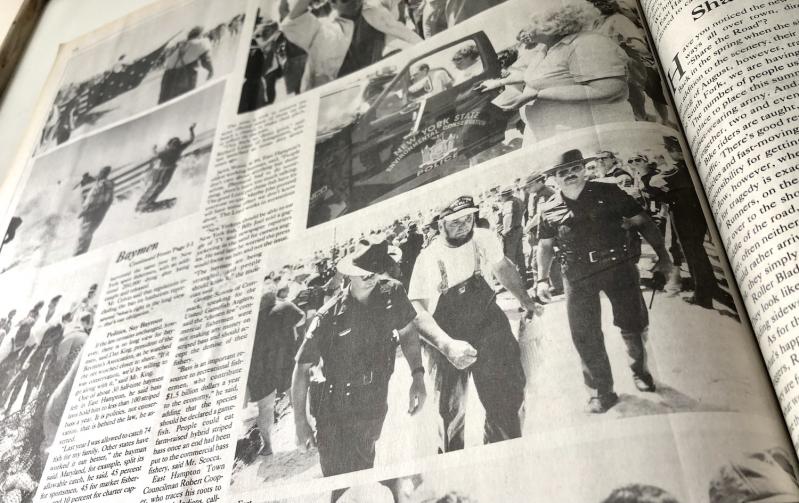 On July 30, 1992, these photographs in The Star captured the essence of an act of civil disobedience two days earlier on the part of baymen who were protesting fishing restrictions. The singer Billy Joel is pictured in the top-right corner, and in the third photo on the right, Dan King, then the president of the East Hampton Baymen’s Association, is seen being taken into custody.
These photographs were taken by James J. Mackin, Doug Kuntz, and Russell Drumm.
By Tom Gogola

Thirty years later, Patty Eames says it was “a day that’s right here at the front of my brain.”

Ms. Eames was one of many locals and luminaries who were arrested at Indian Wells Beach in Amagansett on July 28, 1992, during a storied protest that found the East Hampton Baymen’s Association in open defiance of a 1990 state ban on haulseining for striped bass off the ocean beaches.

The protesters and their supporters, Billy Joel and the East Hampton Town Supervisor among them, watched as Dan King brought a load of stripers to shore. Reporters took notes and photographers snapped pictures of his red, white, and blue dory and of people grabbing fish from the net with the intention of being arrested.

“There are a lot of parallels between the two stories, in the sense that these people, the baymen, are fighters,” said Mr. Rodgers, who has represented the baymen pro bono for 20 years.

The 1992 protest was the culmination of long years of frustration and bitterness over the state regulations, which crippled the commercial striped bass fishery. The fishery was shut down in 1985, when the state accused General Electric of polluting the Hudson River, and the striped bass that spawn there, with polychlorinated biphenyls, a toxic compound.

Striped bass were declared safe from PCB contamination five years later, and G.E., following a lengthy lawsuit, reached a settlement with the fishermen in 1993, though the cleanup of the Hudson did not begin until 2009. However, even as the striper market reopened in the early ‘90s, the State Department of Environmental Conservation moved to ban haulseining.

Writing in these pages on the 20th anniversary of the protest, the late Russell Drumm highlighted the backdrop for the act of civil disobedience: hostility between sportfishermen and baymen: “The old haul seine, which in early days was hauled back to shore by horses, was the most efficient method of catching striped bass, the ‘money fish.’ But to the ever-growing number of sportfishermen, it had become the engine of anti-conservation, although ‘conservation’ by then was really a code word for getting a larger slice of the state’s striped bass quota.”

Ms. Eames vividly recalled the events of the day of protest. Her father, the late Donald Eames Sr., was sick that day and she’d nearly forgotten about the planned event, she said, but remembered in time to rush to the John M. Marshall Elementary School, pull her two sons out of the playground, and race to the beach. “We got there just as they pulled the bag in.”

The net was thick with the illegally harvested striped bass, and the beach was filled with police cars, emergency vehicles, and work trucks. Billy Joel, whose song “The Downeaster Alexa” commemorates the baymen’s hardships, was there with Supervisor Tony Bullock and other elected officials.

Ms. Eames approached the protesters with her sons, Clint Jr. and Jimmy, and found Mitchell Lester, a cousin and one of the driving forces behind the protest. “I said to him, ‘Give Clint a fish.’ " Clint was then 6 or 7 years old. “Mitchell gave him the fish, and now here’s this little guy on the beach carrying this big fish over his head and saying, ‘This is for my grandpa.’ “

Clint Jr. and his mother walked up to the longstanding local D.E.C. officer Joe Bilotto. “He looks at me and Clint and says, ‘Patty, what are we doing here? I can’t arrest the kid. Either throw the fish back, or you have to take the fish.’ “ Ms. Eames took the fish, got arrested, and subsequently went to East Hampton Town Justice Court, along with Mr. Joel and the rest.

The case was dismissed.

Clint Bennett Jr., now in his late 30s, has continued in the family tradition as owner-operator of Bennett Shellfish in Montauk. “I was a little guy then,” he said last week with a laugh. “I remember carrying the fish up the beach. It was really steep, and I fell, and I remember thinking, what am I doing, why am I doing this, with all these family members and cameras, reporters, and four or five officers around.”

It was not a good time for his tight-knit community. “We were all worried about how we were going to feed and raise our families,” said Ms. Eames. Five years before the D.E.C. reopened the striper fishery in 1990, the state had raised the minimum allowable length for keeper fish. Along with the ban on haulseining, it put a number of baymen out of business, Don Eames among them.

“My father went to work driving a produce truck into the city,” said his daughter. “My brother took a job at the Amagansett grade school as a bus driver and custodian. I wish the D.E.C. had thought more about why these men were doing this work. Haulseining is not easy — you’re on the beach at 4:30 to set the net at daybreak, to take care of their families.”

The family’s idea of a vacation, she said, was to “go visit relatives in East Islip” or enjoy some midnight scalloping. “Have knife, will travel,” she said with a smile. She traces her fishing roots back to great-grandparents who were whalers.

“You know, there’s something about the sea and a man’s soul, and when you’re brought up and raised with it, it’s always there. I know both of my boys would never leave the sea. They need to hear the roar, they need to see the ocean. I tried as a mom with my kids to make sure they didn’t lose their heritage.”

The 1992 protest, said Mr. Rogers, the lawyer, has resounded through the decades. Thirty years ago, the bayman Calvin Lester was one of the protesters. Today, his sons, Daniel and Paul Lester, are two of Mr. Rogers’s clients in the Truck Beach suit.

Mashashimuet Park's History and Future
A Conference for Young People to Create Solutions
Get Outside, Get Moving
END_OF_DOCUMENT_TOKEN_TO_BE_REPLACED