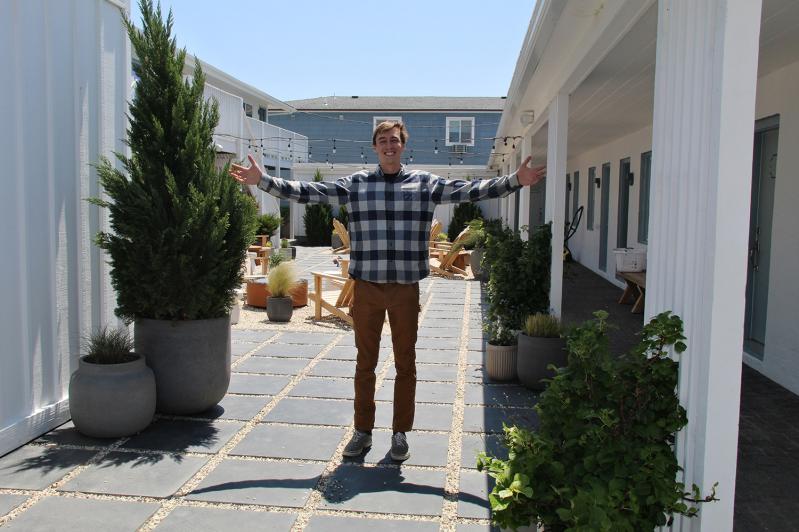 Leo Daunt proudly showed off the redesigned courtyard at Daunt’s Albatross Motel in Montauk, part of a larger renovation that has given the vintage family-owned place a little 21st-century swish.
Durell Godfrey
By Judy D’Mello

Leo Daunt hasn’t just co-opted any old vintage mom-and-pop atmosphere of 1970s Montauk in the repurposing of his seaside motel. The 29-year-old has actually taken his mom and pop’s vibe and given it a cool rethink with glossy interiors and contemporary twists like Himalayan salt lamps in the rooms, outdoor fire pits, and a yoga pavilion — the better to cater to the values of the millennial traveler.

Daunt’s Albatross, the once-funky Montauk motel on South Elmwood Avenue, a block from the Atlantic Ocean, and two from the center of town, has had a makeover, the first major one since Mr. Daunt’s grandfather opened its doors in 1977.

“I grew up here, our extended family was always running around down here, like actually onsite,” Mr. Daunt said, laughing. Seated in an Adirondack chair in the motel’s newly-designed interior courtyard, with fairy lights draped above clusters of chairs around metal fire pits, where s’mores will be served, he reminisced about his childhood. “I never thought that I would have anything to do with it, really. But, when I came back from college, I felt like this is a pretty amazing place. And that’s kind of when I started to dream about what it could be one day.”

While his father still owns the 23-room motel, the younger Mr. Daunt was appointed the general manager in 2020 and also serves as the co-president of the Montauk Chamber of Commerce. The motel officially reopened on May 6, following a two-year renovation.

Montauk’s authenticity is a rare commodity today. And an establishment that has remained within a local family for three generations is rarer still. Once loved for its slightly frayed-around-the-edges charm, Montauk has over the last decade come to more closely resemble its upscale neighbors to the west. The hamlet’s real estate market has also soared, attracting an increasingly moneyed crowd. While all this has been a boon for businesses and property values, it has nonetheless brought challenges for the locals. Many have been forced out by skyrocketing rents, while others cashed out and relocated to less spiffy ZIP codes.

This shift in the local landscape got the young “motelier” thinking.

“The property was getting older and I knew that we needed to do something. And you can see the change around Montauk. You see all these places selling up and corporate investment companies coming in and renovating,” he said, adding that he is passionate about history — it was his major in college, with a minor in economics.

What Mr. Daunt said he saw around Montauk was, “an old versus new battle.” So, he began dreaming of turning his family’s motel into something with 21st-century swish — great Wi-Fi, comfortable beds, barista-style coffee — but still respectful of Montauk’s history and charm. “New, elevated, really thoughtful, but still feels like Montauk. So, I like to think that the new Albatross is the local boutique hotel,” he said.

The renovation has indeed been a success. So said Michael Reisman, who was staying there with his wife and their dog — yes, it’s a dog-friendly place, and always has been. The couple, who live in the Hudson Valley, have vacationed at the Albatross, always off-season, over the last five years, mainly because it was “a relaxed place where we could bring our dog,” he said. While he always loved the unassuming nature of the old motel, he admitted it was in need of an upgrade. The revamped Albatross was impressive, he said, still every bit as charming and not outrageously expensive.

The rooms, which come in a range of bed configurations, are unfussy, designed by Home Studios, a Brooklyn interior design firm. Minimalist bed frames and minibars have been custom built in knotty alder wood, chosen for its more rustic-looking finish, which complements a few locally-sourced vintage items in the rooms. Bathrooms are colorfully tiled and the bathrobes and towels by Parachute, generously plush. Some rooms have kitchenettes, others have a sit-out balcony for perfect sunset moments, and all have flat-screen televisions. The largest accommodation, the Koda Suite, with two bedrooms and bathrooms, is named after Mr. Daunt’s golden retriever, who is usually sprawled out on the front office couch.

The motel also has a pool (renovation to follow later this year), outdoor grills, a brick pizza oven, and a yoga area.

Across the street, the Bird on the Roof restaurant, which Mr. Daunt’s grandfather passed on buying for $50,000 in 1977, has finally been acquired by the family. Its food has been “elevated,” said Mr. Daunt, who, with the help of his sister, Zoe Daunt, hustled to get it ready for Memorial Day weekend. The restaurant will serve breakfast and lunch, between 8 a.m. and 4 p.m., seven days a week. “It’s not going to be fancy, it’s going be approachable,” he explained. “A thoughtful menu with things that are created from scratch and with love by a local chef, Marco Martinez Perez.”

Mr. Daunt now lives in an apartment above the front office. “I like living here. We decided that part of what makes the Albatross amazing is the face-to-face contact. We want you to feel like you’re walking into your cousin’s place and they’re ready to welcome you for a weekend,” he said. It will be open year round.