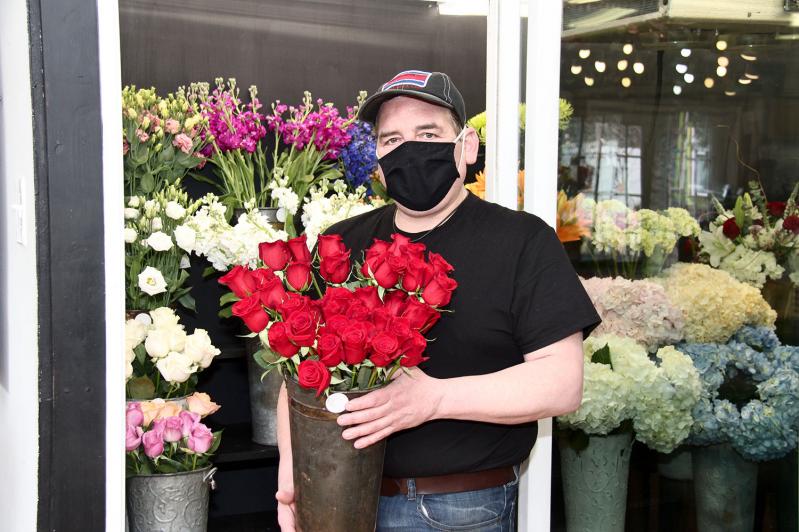 Michael Lucci, a co-owner of East Hampton Florist, said demand for flowers was so high that he had to find a new way of importing them directly from countries like Holland and Ecuador, with the benefit being that they are fresher and last longer.
Durell Godfrey Photos
By Bella Lewis

People have rushed and raided shelves for the obvious during Covid — hand sanitizer, disinfectant, paper towels, yeast for all those burgeoning home bakers — but they've also rushed to buy up unexpected things like dumbbells, balloons, Krud Kutter, tiki torches, and zinc.

Among the more niche Covid best sellers was home exercise equipment. Geary Gubbins, owner of the East Hampton sporting goods store Gubbins, said there was a two-month period in which calling his suppliers' office was fruitless. "No one would pick up because there was no inventory."

The most requested items in his store, before the pandemic dried up supplies, were dumbbells.

"If you think about dumbbells, it's not something easily trans-ferred," he said.

Michael Lucci, co-owner of East Hampton Florist, said he has been tearing through helium tanks to fill orders of 20 to 50 balloons for birthdays. "Grandma sending the kids balloons, virtual graduations, baby-reveal parties." When friends and relatives couldn't attend celebrations in person, they sent balloons in their stead.

Demand for flowers was so high, what with so many more people here and anxious to do what they could to spruce up their quarantine quarters, that Mr. Lucci had to cook up a new way of importing them directly from countries like Holland and Ecuador. It is 15 percent more expensive for him, he said, but "the product is a week and a half fresher so it pays for itself." Customers have been calling to rave about the flowers' shelf life, he said.

"Anything that relates to cleaning in any way shape or form" has been in high demand, said Gene Phillips, owner of the Henry Persan and Sons hardware store in Sag Harbor. "Two products I cannot keep in stock: anything that says Lysol or Clorox on it, and that's to this day."

To fill the Lysol and Clorox void, people found alternatives. "Other companies that made similar products like Krud Kutter sold well," Mr. Phillips said. "Point of fact, when we would clean counters, the staff actually preferred that over Clorox — the smell, the whole thing."

He could tell from people's shopping habits that they were staying home. They bought patio heaters, fire pits, tiki torches, and outdoor lights. "Those were all things that sold out real fast and were hard to get back in."

"You'd walk into the store and the cupboards were bare. It looked like we were going out of business," said Lisa Blinderman, owner of Second Nature Market in East Hampton. As far as supplements went, "we couldn't keep them on our shelves." Zinc was the number-one seller. Even now, she said, she might order 50 bottles and only get two. "Elderberry, vitamin C, all forms of gummies, liquids, probiotics, oil of oregano, mushrooms, green powders." Ms. Blinderman rattled off items from the new section of the store dedicated to the wellness products that people have turned to in the pandemic. Nature's Plus Tri-Immune is having its 15 minutes of fame, she said, as are many supplements that the store has sold for decades.

While normally the store "attracts the savvy ones to health and wellness, now we're seeing customers that weren't traditionally our health food store shoppers." Ms. Blinderman reckons that she might have picked up customers from the sheer influx of people to the East End, plus the times that Stop and Shop ran out of paper towels.

At Botanica Bazaar in Amagansett Square, Kati Tikkanen, a salesperson, similarly reported that LivOn Labs Lypo-Spheric vitamin C has been difficult to keep on shelves as people try to keep their immune systems as boosted as possible. At $47 for one month's supply, the concentrated vitamin C is more bio-available than normal vitamins that get only partially absorbed, Ms. Tikkanen explained.

In a similar self-care spirit, Lynda Hernandez, the assistant manager at Bonne Nuit in East Hampton, said for her customers it was about loungewear. "Our basic pajamas in jersey material go really quick," she said, naming the bran Eberjay as a top seller. Wireless bras "unsurprisingly" had their moment, she said, and as for whether or not lingerie was selling, she laughed. "You would be surprised!"

Jessica Hom, a general manager at White's Apothecary in East Hampton, also noted that personal care items like mouthwash and toothpaste were very much on track sales-wise.

Smaller businesses were "a little more nimble in working the supply chain," said Charlotte Sasso, a co-owner of Stuart's Seafood Market in Amagansett. Stuart's did not suffer the usual shortfalls as "there was plenty of seafood around because the restaurants didn't need it." And, Ms. Sasso was also able to buy in bulk and offer high-demand ingredients. "I.G.A. can't get a 50-pound bag of flour and put it into five-pound bags," she said, but her shop could. Stuart's started selling more general groceries than ever before in order to accommodate its regulars who could not find things elsewhere.

"If I couldn't get organic milk, people who always got it would take regular milk. They weren't so precious."

If abundant seafood situated the state of affairs in East Hampton during the pandemic, then so did the shortage of adult jigsaw puzzles depicting covers of The New Yorker by New York Puzzle Company. "Here we sit in Eastern Long Island with the perfect audience," hypothesized Glen Waddington, co-owner of The Wharf Shop in Sag Harbor. Last January, she ordered "enough puzzles . . . to be stocked all the way through to August," but by mid-April, all the adult level puzzles were gone. Companies producing them "could not keep up with the demand," she said.

Large Lego sets sold "like crazy" for parents trying to keep their kids entertained while at home, she said, but Lego could not keep up production either when factories shut down for three months. A fair number of stuffed animals were selling, too, she thought perhaps for the extra comfort people of all ages seemed to need.

Comfort was a theme in the food world, too. At East Hampton's Villa Italian Specialties, Sam Muntaz, the store manager, said people were buying a lot of prepared food and that hot soup sales were up 50 percent. Louis Cabrera, a cashier at La Fondita in Amagansett, also acknowledged a comfort food theme of soups and steaks.

At Hampton Chutney in Amagansett Square, curried chicken over rice was one dish that Isabel MacGurn, co-owner, had flagged as a potential Covid comfort food based on how unusually fast the shop went through it.

The battle for paper products, however, was the most salient one for Mr. Muntaz and Ms. MacGurn, who is currently paying double to get items like foil sheets, shopping bags, and the cardboard drink trays.

"That one sticks out a little bit," said Veronica Thierse-Bickley, a barista at Jack's Coffee, where the trays were scarce thanks to "triple the population all ordering 15 drinks." Jack's was so flooded with city clientele decamping to the South Fork that "we had to have coffee from the city brought in on the Jitney."

"We would walk into the store and there would be nothing in it," said Ms. Thierse-Bickley. The shop went through so much coffee that staff would have to pull the bags of ground beans packed up for customers off the shelves to brew more. "It was like that."