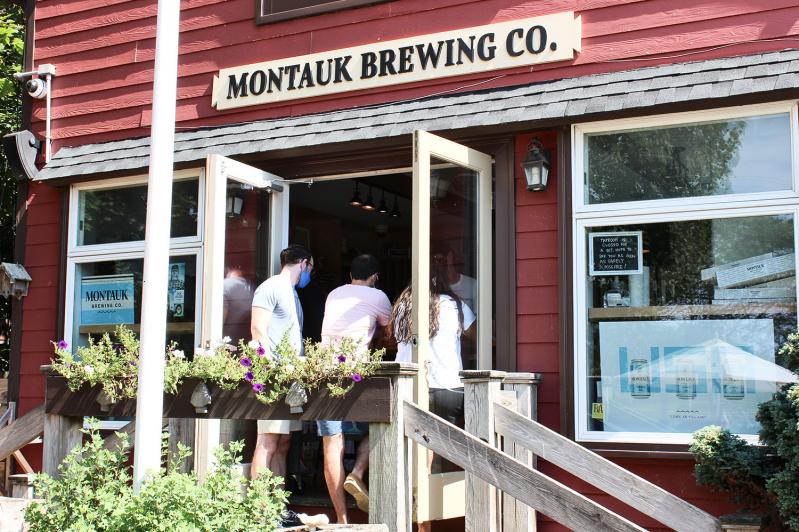 Customers picked up orders at the Montauk Brewing Company's tasting room on Friday. The taproom and patio are closed in accordance with the state's Covid-19 safety protocols.
Bella Lewis
By Carissa Katz

When the Montauk Brewing Company declared its support for the Black Lives Matter movement on a chalkboard outside its tasting room and on its Instagram account in June, saying that it had made donations to the N.A.A.C.P. and Black Emotional and Mental Health, initial reactions were largely positive. But a delayed backlash in the form of a new Facebook group that emerged last week called Defund Montauk Brewing Company is dragging the small business onto the battlefield of a social media war of words.

The group was formed on Aug. 12, and by Tuesday night it had more than 25,000 members. In its "about this group" statement, Defund Montauk Brewing Company writes, "This group is to bring awareness Due The recent events that montauk brewing company has decided to take and make a poor decision by supporting a anti American terrorist group [sic]."

The next day a spate of negative reviews for the Montauk Brewing beers and tasting room began appearing on the crowd-sourced reviewing platform Yelp. There were so many, in fact, that Yelp temporarily disabled posting to the Montauk Brewing page. "This business recently received increased public attention, which often means people come to this page to post their views on the news," a message read. "While we don't take a stand one way or another when it comes to this incident, we work to verify that the content you see here reflects personal consumer experiences with the business rather than the news itself." Commenting was still disabled as of yesterday morning.

Defund Montauk Brewing Company, whose administrators are listed as Valeria Frank of Nassau County and Rob Frank of Farmingdale, has been made private, but posts that were visible on Friday when it was still a public group expressed outrage at the Black Lives Matter movement, which has called for racial justice, an end to racism in policing, and defunding of the police. One photo posted on the Defund Montauk Brewing Company page showed a woman pouring blue paint on a Black Lives Matter mural in Manhattan with the caption "Because #BlueLivesMatter too." Other members accused the Black Lives movement of condoning violence and supporting terrorism, and the Montauk Brewing Company of being complicit in those aims.

Friday's chalkboard message outside the tasting room addressed the criticism: "We have, and will always support our local police, first responders, nurses, doctors, and fire departments. We also support equal rights for all. At the end of the day, we support good people doing good things."

"While our post received overwhelming support initially, recent responses made us realize we should clarify and affirm our intent," they wrote. "Our post was specifically in support of racial equality. We unequivocally, and unapologetically, stand against racism and violence in any capacity." At the same time, they wrote, the company's "track record shows that we consistently donate to Police Precincts, Fire Fighters, the Navy Seal Foundation, Wounded Warrior Project, Coast Guard, Mt. Sinai Hospital, and more. We will never take a partisan stance, but we will always be empathetic towards the mistreatment of others."

"As members of the community ourselves, some of whom have grown up in Montauk and are close with many community members including law enforcement, we want to be clear: we value the support you have always shown us since we opened in 2012," the letter says.

By Tuesday, there were over 2,000 comments on the Facebook post and nearly 1,300 on the Instagram post from both sides of the divide. One promised that the company's stance had won them "a customer for life," while others continued to decry the business for "supporting a home-grown terror group like BLM."

Those weighing in on the Montauk Brewing Company's behalf wrote, "We support you wholeheartedly and appreciate you being unafraid to be anti-racist," and "I don't understand why people believe that you can't support our dedicated law enforcement officers AND despise racial inequality. It shouldn't be either/or!!!"

"Enjoying a beer or two with friends and family is supposed to be fun. Keep your personal feelings of politics away from your product promotion," another person wrote.

"Not Cool!!!" another posted. "You took your stand and crossed the line, you lossed [sic] my patronage and many others! Also canceled my trip to the east end!!!"

Another wrote, "If anyone had taken the time to find out ALL of the initiatives you support, maybe they wouldn't have jumped to conclusions. Thank you for supporting the community in a multifaceted way. Keep up the good work. We will have a fridge full of Montauk this weekend. Cheers to being a class act!"

But one person commenting on their Saturday morning letter wrote, "The few on here supporting you will not make up for the thousands abandoning you."

Kate Mueth of East Hampton, the founder and artistic director of the dance theater company the Neo-Political Cowgirls, made a Facebook page called We Love Montauk Brewing Company on Friday, encouraging members to "spread the love of good product and good people all rolled into one company." And Willie Jenkins, an organizer and frequent speaker at racial justice rallies across the East End this summer, organized but then called off a Support Montauk Brewing Company event for this Saturday. In a Facebook video, he said that the founders "just want to keep it quiet" but were "real classy when I spoke to them."

"We're still going to purchase their products and show support in that way," Mr. Jenkins said. Members of the Defund group began to target him after he called for the Saturday event, he said, but he also had some conversations that he felt were positive and productive. Just as a small percentage of police officers are "bad apples," so too are a small percentage of the people on his side of the issue. "Ninety-nine percent of them, they just want to go out there and protest for equality," he said in his video. "I'm thankful for those conversations and that dialogue back and forth is how we can change things."

Manny Vilar, chairman of the East Hampton Town Republican Committee and the founding president of the Police Benevolent Association of New York State, also weighed in on Saturday with a Facebook post that was critical of the brewing company, but on Sunday said he had removed it later that day after speaking with Mr. Moss and Mr. Cutillo. "I can unequivocally state that Montauk Brewery Company owners #SupportOurPolice and rejects all positions, ideologies, and organizations that promote and advocate defunding police, anti-police, racial, and professional biased sentiments," he wrote. "They have been and continue to be supporters of our police. . . . In short, they are what East Hampton needs more of."

During an East Hampton Town Board meeting on Tuesday, Supervisor Peter Van Scoyoc, Councilmen David Lys and Jeff Bragman, and Councilwoman Sylvia Overby all spoke up for the brewing company and its owners and founders. Mr. Lys lamented that they were "unfortunately being crucified through the negative powers of social media about their decision to speak up . . . to support and be empathetic of mistreatment of others. . . . I want to let them know and anyone watching that I support them and what they did. I support the actions even of their naysayers, I just don't support the way it's being done."

"This small, local company that's done a great job and does make a great product — and that's why they're doing well — has a right to express an opinion that they don't support racism," Mr. Bragman said. "At the same time, people that disagree do have a right to post things on Facebook and they even have a right to boycott if they want. I don't think that's appropriate, but they can do it."

A comment against racism, which is "very endemic," should not pit someone against those who value "good, solid community policing," Mr. Bragman continued. "The two are not mutually exclusive; they're not antithetical. You can have both. I support both. . . . I'm very proud of our police chief, who I think is really focused on community policing and knowing the community, and overall a very good guy."

"Frankly," said Mr. Van Scoyoc, "I feel really bad for our police and police all over who, through the pandemic, were out there trying to keep people safe, protecting the public, and putting themselves at risk when we knew very little about what this disease could do and how quickly it can spread. . . . And then we have this incredibly heinous action of George Floyd being basically murdered . . . by a police officer, and now suddenly every police officer is painted with that brush. That's incredibly sad, that that would happen. By the same token, those who have worked for racial justice and to solve inequalities can get painted with a broad brush of some in that movement who might take actions or say things that don't represent the vast majority of people, and the whole movement then can get painted with that brush."

With Reporting by Christopher Walsh and Bella Lewis