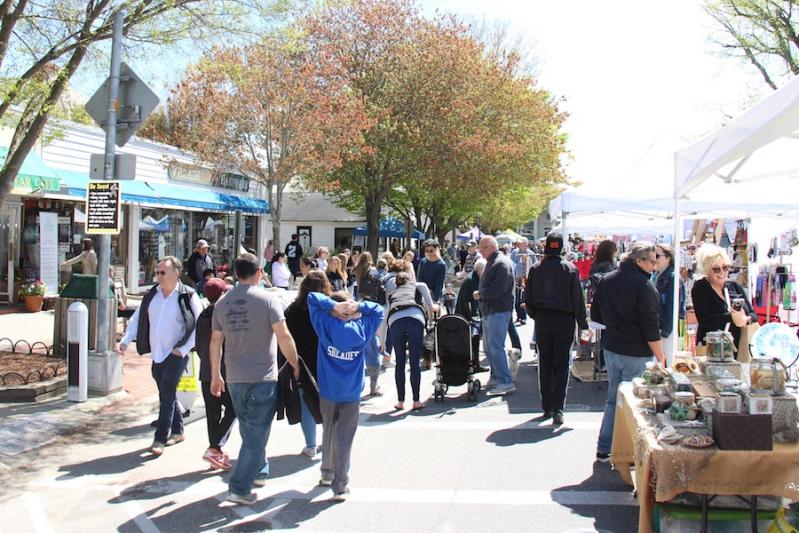 The Spring Street Fair on May 11 brought some 4,000 people to East Hampton Village, but some disgruntled shopkeepers said it has hurt, not helped, their business that day.
By Jamie Bufalino

On Friday, the day after a confrontational meeting between East Hampton Village storeowners who said their businesses had been crippled by the May 11 spring fair on Newtown lane, and Steve Ringel, executive director of the East Hampton Chamber of Commerce, who organized the event, both sides showed up at a meeting of the village board.

Donald Horowitz, the co-owner of Wittendale's Florist and Greenhouses on Newtown Lane, told the board he and about 12 other shopkeepers had met with Mr. Ringel to register their complaints about the fair.

"Everybody on Newtown Lane said it impacted their business," said Mr. Horowitz. "A couple said they had no sales, or practically nothing."

In April, Mr. Horowitz told the board that the fair, which has been held on the Saturday before Mother's Day since it began two years ago, had a ruinous effect on sales on what had been one of his biggest days of the year. The main problem, he said, was that Newtown Lane is closed to traffic for the fair, making parking difficult or impossible.

The board had recommended he meet with Chief of Police Michael Tracey, who would help him find a way to provide better access to the nursery.

On Friday, he said the village had been “highly accommodating,” and that Wittendale’s had done better. Still, parking remained an issue, he said, particularly for spur-of-the-moment shoppers.

Prior to the fair, Mr. Horowitz said he had shared his concerns about it with Mr. Ringel, who told him, he said, that he was just one business owner, and that it was the Chamber of Commerce’s duty to think about the greater good of the community. “Honestly, I felt very hurt,” Mr. Horowitz told the board.

Mr. Ringel, who was also at the board meeting, made a similar remark after it ended. “At times you have to weigh what’s best for the community over one day of sales,” he said.

Mr. Horowitz said he had asked Mr. Ringel when they met last Thursday to have the fair moved off Newtown Lane in the future and into Herrick Park, and that Mr. Ringel responded, “No. It’s a street fair, it has to be in the street.”

“He seemed very vehement about that,” Mr. Horowitz told the board, although by the end of their meeting, he said, Mr. Ringel seemed more amenable to holding the event in the park.

Mayor Paul F. Rickenbach Jr. asked if the storeowners who met with Mr. Ringel were members of the Chamber, and Mr. Horowitz said, “Actually, no — and that was surprising to me.”

Valerie Smith, the owner of the Monogram Shop, who attended last Thursday’s meeting with Mr. Ringel, said, later on Friday, that she was not a member of the Chamber, and in fact had never met Mr. Ringel before. Ms. Smith said she had had almost no sales on the day of the fair, adding that she was also not a fan of the event’s production values. For instance, she said, she did not think the vendors were East Hampton caliber, and she felt aurally assaulted by the music emanating from the stage set up at the southern end of Newtown Lane, near her store.

Mr. Ringel provided his assessment of the fair to the board on Friday, describing it as very successful. About 4,000 people had been in attendance, he said, and the owners of Newtown Lane businesses including Clic, Oliver Peoples, Cittanuova, and Babette’s had told him they had been extremely busy that day.

The upside to his meeting with the disgruntled shopkeepers, he said, was that it kick-started a relationship between the Chamber and a core group of passionate business owners. As for the adverse effect the event had on some stores’ sales, Mr. Ringel said he would look for more ways to incorporate the local merchants into the fair.

Although the village had allowed stores to conduct sidewalk sales that day, few did so.

Board members including Barbara Borsack, Rose Brown, and Arthur Graham said that merchants had not been made aware of the option.

Mr. Ringel said he had delivered letters notifying shopkeepers. Employees may not have relayed them, he suggested.

One storeowner who did not receive the notice was Ms. Smith, who said she didn’t like the idea of holding a sidewalk sale because it had the potential to transform the village into an outlet mall. “It’s a slippery slope,” she said.

After the board meeting, Mr. Ringel said he was looking forward to a continued dialogue with the merchants, but he was still flummoxed by the negative attitude many of them had about the fair. “What about us bringing 4,000 people to your front door is bad for business?” he asked.

Ms. Borsack and Ms. Brown plan to meet with shopkeepers and Mr. Ringel to develop a better protocol for the event.